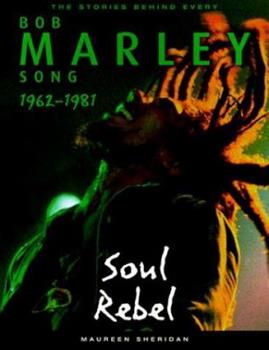 Bob Marley left a legacy of politically and religiously charged songs of lyrical power and social significance that has changed the history of popular music. In addition to exploring the experiences behind Marley's best work, Chris Welch reveals the significance of the superb singles and albums delivered by Bob Marley and the Wailers from the early '60s to Marley's untimely death in May 1981. Includes 90 color and black-and-white photographs, a complete...

Published by Thriftbooks.com User , 16 years ago
Of all the books published to date on Bob Marley, this one, in my humble opinion, stands out as offering an honest and in-depth portrayal of the man and the music he created. Someone told me that Junior Marvin of The Wailers said that this is the best book written on Marley and I concur. It is obvious that the author is knowledgeable about both her subject and the country he came from. A good addition to any reggae fan's library, or the library of anyone interested in the inner-workings of Jamaica.

Every picture tells a story

Published by Thriftbooks.com User , 18 years ago
I think this is a pretty good book for Bob Marley fans. If you want a lot of detailed biographical and political background, then Catch A Fire is a pretty good biography that I recommend, but this book makes a great supplement as there is plenty of material about the history of the music, who composed what, and the story of all the albums. The book appears to be based largely on a number of interviews with people who were important in Marley's life, such as Cindy Breakspeare, Chris Blackwell, manager Don Taylor, and record producer Clement 'Coxsone' Dodd and others, so their viewpoints (which may be self serving) tend to prevail.There is at least a paragraph or two about every song, as well as sections that explain the personal and political background to the lyrics of the songs. There are also lots of pictures. On the other hand, there is not a very detailed explanation of the lyrics. For example I learned what 'a government yard in Trenchtown' (from No Woman No Cry) meant from Catch A Fire, and not from this book.Definitely a mass market book, and not terribly deep, but I think this book will delight most Bob Marley fans and probably help them get deeper into his music.There is not much critical evaluation of his music, and if you are looking to find out which albums are the best the book won't help you. But I will! Just save yourself the trouble and buy all the Island/Tuff Gong albums first, then if you still want more you might look into the earlier stuff. If you already have everything, there is a new Live at the Roxy double CD that has great remastering and really rocks.Given that CD covers don't provide as good a platform for rolling spliffs as the old LP covers, this book, which is in a coffee table book size paperback might be a useful purchase in more ways than one.

The Works Of a Prophet

Published by Thriftbooks.com User , 20 years ago
I had chosen Bob Marley for a paper I was doing at college. Many of the books that I read gave a little insight into the man and his reality but the most important thing about him, i.e. the music, many times is overlooked in the stories of many. To understand the man's music, what he wrote and what it means, to me, is what we are left with. This book not only allows you to understand his headspace but explains all the little things we may not really understand at first glance...Thankyou for giving me that insight...

Published by Thriftbooks.com User , 21 years ago
I enjoyed this book thoroughly because it gives a much more balanced look at the reality in Jamaica, especially now since it seems the same reality is upon Jamaicans again and though it may be covered up with white sand beaches and coconuts, not much has changed...the struggle continues...which leads one to ask if as insightful as Bob's lyrics are, and will forever be...have they really changed anything, or have we kept things the same so we can keep singing the same songs?Very interesting perspective.

Published by Thriftbooks.com User , 22 years ago
I had the opportunity to read this book over the holidays. Being a Marley fan from ever since I am always looking for anything about him. What I noticed about this book is that unlike all the other books I have read on him is, I actually learned more about the man. Other books basically say the same thing, but this one gives a deeper insight into the man himself and gets a little more into the political plays and moves that make his story interesting. It separates the true magic of the legend from the myth of the irie island he came from and makes his songs even more profound in meaning. A true master at telling it like it is....
Trustpilot
Copyright © 2022 Thriftbooks.com Terms of Use | Privacy Policy | Do Not Sell My Personal Information | Accessibility Statement
ThriftBooks® and the ThriftBooks® logo are registered trademarks of Thrift Books Global, LLC