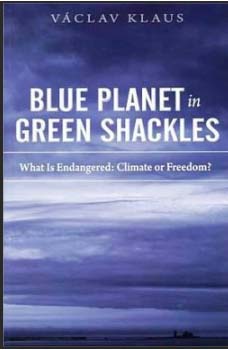 Blue Planet in Green Shackles: What Is Endangered: Climate or Freedom?

The largest threat to freedom, democracy, the market economy, and prosperity at the beginning of the 21st century is no longer socialism or Communism. It is, instead, the ambitious, arrogant,... This description may be from another edition of this product.

Published by Thriftbooks.com User , 13 years ago
This well-reasoned book by the current President of the European Union objects to the politicization and hysteria of the Global Warming Hoax. President Vaclav Klaus, the author, cogently explains the dangers of the Global Warming Hoax. He attacks this hoax first of all as an assault on human liberty. Klaus shows that the the tactics of the hoax promoters are basically the same tactics of the Communists - lack of debate, suppressing opposing views, and complete state control by a few dictators. When he quotes the architect of the Kyoto Protocol, Maurice Strong, as saying, "Isn't the only hope for the planet that the industrialized civilizations collapse? Isn't it our duty to bring that about?", you will realize that such a nasty comment could only exist in a climate of fear and oppression. What a difference a few years makes. Now as we see the engineered collapse of our civilization by these same kooks, who can argue that Klaus is wrong? Klaus has lived and seen this limitation of freedom that socialism imposes on its citizens and his is a welcome voice of warning. The foreword to the book by the head of a think tank notes that the very success of Capitalism would lead to a massive bureaucratic Mandarinate of pseudo-intellectuals and government functionaries who would restrict liberty. Again, you will be amazed at the prescience of these people. The first part of the book introduces and proves the theme that the hoax promoters are thinly-veiled fascists. Klaus also includes a fair amount of science debunking the absurd claims of the hoaxers. The middle part of the book is a fairly technical economics discussion of resources, prices, scarcity and discounting. For me, not an economist, this part was less interesting. Klaus then closes with a coup de grace involving correct information on climate. You can only laugh when Klaus notes that the current hoax document, the IPPC, contains information like this - "climate may be partly predictable." And after you laugh, you will cry when you realize that idiocy now substitutes for science and liberty in the world. The appendices which stand on their own include the author's testimony before the US Congress, a speech at the UN, and other refutations of this hoax. The bibliography is also critical to developing an understanding of the strength of President Klaus's thesis and the weakness of the hoaxers' ridiculous computer models. The late Michael Crichton's speeches and writings are cited and if you haven't read his "State of Fear", you need to just for the citations of papers refuting various aspects of Global Warming. This is a serious work by a well-respected international figure, and I highly recommend it.
Trustpilot
Copyright © 2022 Thriftbooks.com Terms of Use | Privacy Policy | Do Not Sell My Personal Information | Accessibility Statement
ThriftBooks® and the ThriftBooks® logo are registered trademarks of Thrift Books Global, LLC