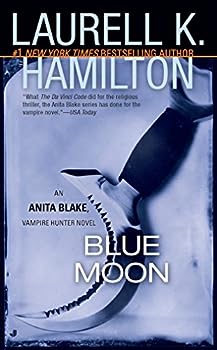 This description may be from another edition of this product. The Anita Blake, Vampire Hunter backlist lights up the night. In her eighth adventure, Anita Blake can't turn her back on a former lover during the full moon. Especially since he's behind bars-and...

Published by Thriftbooks.com User , 16 years ago
Anita Blake, Executioner, necromancer, lover and human servant to Jean-Claude - the charismatic Master Vampire of St. Louis, lupa of the Thronnus Roke Clan lukoi, and Nimir-ra of a pard of leopard lycanthropes, is changing...more so all the time. When Laurell Hamilton introduced her to us in "Guilty Pleasures," Book One of the Anita Blake Vampire Hunter series, she was a 24 year-old, smart, attractive, feisty, super-independent dynamo, who raised the dead for a living. She was almost a normal 21st century career girl. Of course she staked rogue vampires as a sideline, but we all have our quirks. Anita's preternatural powers have been steadily increasing, and in "Blue Moon," book eight in the Anita Blake Vampire Hunter series, the lines are really beginning to blur between her humanity and the supernatural. Always an uncompromising and tough lady, she has developed a hardness, a detachment, that frightens even herself. Anita, Richard Zeeman, (an alpha werewolf and her old boyfriend), and Jean-Claude, (her present lover), had formed a Triumvirate of power - Master Vampire, Ulfric and necromancer. In other words, when the three connect, they exude tremendous force and are able to do much more magic than any one or two can do alone. The three are still bound to each other, even though Richard is furious with Anita for dumping him. She had to choose between "a flesh eater and a bloodsucker." Do you see a pattern here? Late one evening Anita receives a phone call from Richard's brother. Zeeman had been spending the summer in Meyerton, Tennessee, studying the Lesser Smokey Mountain Trolls which live in the area, and fulfilling the requirements for his Masters degree. He has been arrested for the rape of a local women, and is obviously innocent of the charge. Richard is squeaky clean, the ultimate Boy Scout, and very gentle, especially for a lycanthrope. To make the situation worse, a full moon will occur in five days. As luck would have it, this month, August, is a blue moon month - that means two full moons in 31 days - a phenomenon which arises every 3-4 years. And we all know what happens to werewolves during a full moon, don't we? Richard has not "come out of the closet," so to speak, to his parents, his employers, or to many other humans. Basically, he needs to get out of jail pronto. Anita flies down to Meyerton to give him a hand and get him a good attorney. At Jean-Claude's insistence she is accompanied by an entourage of body guards. Colin, the master of the local vampires does not want Anita and cohorts on his turf - for any reason and has made some serious threats. So, vampires Asher and Damian, and lycanthropes Jason, Zane, Cherry, and Nathaniel are there to keep her safe - although, as always, Anita turns out to be the one who does the most protecting. Werewolves Jamil and Shang-Da are around for Richard, to assist him and to join in the Blue Moon celebrations with Verne, the local Ulfric and his pack.. Freeing Richard proves easier

Don't start here, but work your way up

Published by Thriftbooks.com User , 20 years ago
After reading some of the comments of others I was a little reluctant to start this one. A lot of people don't like Richard, and this focuses on Anita's relationship with him. Once I got into it I really enjoyed it however. Richard is coming along as a more multidimensional character. Hamilton has really improved as a writer since the first couple of books (though I've liked all of them), and she continues to develop her characters and add new ones, so she's not just rewriting the same novel over and over. Her imagination is wonderful! She keeps adding details and dimensions to the vampires, werewolves, and other preternatural creatures in a way that's remarkably believable. I love it that Richard is studying trolls for his master's thesis. I know a lot of people have complained about Anita's sex life, but the other reviewers make it sound like it was one orgy after another, when that's hardly the truth. And I like the way Hamilton has Anita succumb to the temptation of having two gorgeous lovers at once (be still, my heart!), only to find a way how not to wear out that plot complication too quickly. I also like the way Jean-Claude is revealed to have more complex motives than merely to be Anita's romantic, charming lover.This is a series that keeps getting better, something that you can't always say about continuing character books. Start with Guilty Pleasures, forgive its clumsiness and wallow in its imagination, and work your way through the series. It's well worth it.

They keep getting better!

Published by Thriftbooks.com User , 21 years ago
I could not put this book down. This series just keeps getting better and better. Yes, the sex is pretty graphic, but graphic writing is one of the things that hooks you into this series. I find it interesting that the people who complain about the detailed descriptions of sex have no complaints about the equally detailed descriptions of mutilated corpses and rotting vampires. Think about it. Anita's powers do keep growing, but they aren't just falling out of the sky: they can all be traced back to a source, be it Jean-Claude's marks, sharing with Richard or her own necromancy. The fact that Anita's changed so much since the first books is one of the other things that has addicted me to this series. She's has to adapt and grow, and we've been along for the ride. DON'T read this series out of order if you can help it -- going from this book to Guilty Pleasures and Lunatic Cafe(or vice versa) without the intervening info could be confusing.

Wonderful,but not as good as the rest.

Published by Thriftbooks.com User , 22 years ago
Blue Moon is a great book, but it does have its downside. The minor characters are described wonderfully, and are easy to like.For example:Jason,Cherry,Asher,and Zane.Anita is cool,as always.But what bothers me is how drastically they changed Jean-Claude's personality.After reading all the AB books,I really don't think that he dates Anita just for power,though it's a good bonus.I don't like the munin part much either.It seems like it was solely created so Anita and Richard could kiss and make up.It was kind of spur-of-the-moment,like Hamilton had decided she didn't like Jean-Claude halfway through the story.But I admit,I am a Jean-Claude fan.Still,if Anita doesn't make up her mind soon,I hope she just runs off with Edward. Despite all that,I still love th AB books,and will be happy to read any other books in the series that come out.I only hope the next one is better planned out,and has more Edward. ^_^

Published by Thriftbooks.com User , 23 years ago
This book answers a lot of questions most of us have had about various things in the Anitaverse,while keeping within the accepted lore of things preternatural yet providing a new and engaging spin to the old tales.Laurell K. Hamiltons writing just improves with time and Blue Moon keeps the pace we've come to expect with the rest of the series while following Anita and company around. It keeps you wondering what's next, surprising you with new revelations and monsters. Hard to put down and harder to forget, especially some of the quips that Anita utters. Wouldn't we all like to say those same things in that situation? But just perfect for a woman who is tough, street wise and as fast with her mouth as she is with her gun. All female heroines/detectives pale like an unfed vampire in comparison. No one does it better.This series is a must read for fans of mystery, vampires, werewolves and things that go bump in the night.If your new to the series, read them in order. But like the previous books in the series Blue Moon can stand alone and still be enjoyed.
Copyright © 2020 Thriftbooks.com Terms of Use | Privacy Policy | Do Not Sell My Personal Information | Accessibility Statement
ThriftBooks® and the ThriftBooks® logo are registered trademarks of Thrift Books Global, LLC