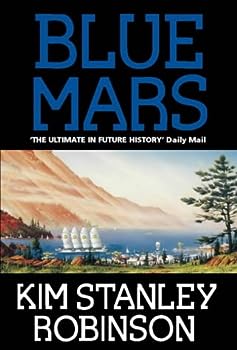 (Book #3 in the Mars Trilogy Series)

Winner of the Hugo Award for Best Novel - One of the most enthralling science fiction sagas ever written, Kim Stanley Robinson's epic trilogy concludes with Blue Mars--a triumph of prodigious research... This description may be from another edition of this product.

Should you buy this book? Of course

Published by Thriftbooks.com User , 13 years ago
The question you're probably asking yourself right now is Should I buy this book? Should I plan to read the trilogy? The answer is of course Yes; just make sure you read the books in the correct order - Red, Green, Blue. Now that's over I shall (as so many people have done) turn to things that niggled me as I read. Robinson has done a great deal to make this a viable plot, but other things confused me. Why would you send rockets to Mars without making sure that all the people were committed to major things like Terraforming? Sure, it provides a clash of ideas that drives the trilogy, but given that this is the most expensive and important thing that Earth has ever done, you'd think that they'd have got them to agree. However, there are other little things that worried me, but the experience of reading the books transcends them. Robinson has descriptions of being on Mars that must be close to the real thing, and he has the ability to put these images into something you'll never forget. So I'll remember soaring over Mars, or sailing its newly formed oceans, or even running from a polar bear. These are things Robinson does to perfection, which is why I'll always recommend this trilogy.

A Great Conclusion to a Great Trilogy

Published by Thriftbooks.com User , 19 years ago
After reading "Blue Mars", I can safely conclude that Kim Stanley Robinson's trilogy is in fact one of the most ambitious projects ever attempted in science fiction. There are, of course, countless projects that tried to tell the entire story of human history and feature huge plot events where the fate of entire planets hangs in the balance. But nobody, to my knowledge, has ever done so with the same incredible level of detail that Robinson gives us."Blue Mars" begins just minutes after where "Green Mars" ended, as various factions fight against UNTA and each other in the ongoing outburst of violence. The battles only take up about fifty pages at the start of the book, and that's followed by a segment devoted to the survivors attempting to establish a system of government on Mars. But while "Green Mars" focused almost entirely on the underground movements and the preparations for the climactic revolt, "Blue Mars" tells a more freewheeling story. As the author frequently reminds us, Mars is a big place, with space for a huge number of communities and individuals to explore and develop.The story told in this book, simply put, is huge. It goes all over the solar system and beyond, looking at how life changes in the future for a gigantic cast of characters. Some of it may seem far-fetched, but all of it is well-written and exciting. There are, as in the previous two books, a lot of passages of descriptive writing, as Robinson tries to help you visualize what he has in mind in terms of setting. In my humble opinion, these passages are the master stroke. They draw the reader into the world that the author creates, making it more real than any other science fiction novel that I can think of. "Blue Mars" is a masterpiece, and a vast improvement over the slower-paced "Green Mars".

Published by Thriftbooks.com User , 19 years ago
The three books in Kim Stanley Robinson's "Mars Trilogy" are my absolute all-time-favorites. He is truly gifted at writing about advanced science and technology and equally adept at creating "real" characters, because he understands psychology. This is a rare talent: to be scientifically knowledgable and a master at creating believable characters. The books are part action, part scientific explanation (like Michael Crichton of Jurassic Park fame), and part character development. In "Red Mars" (the first in the series) Robinson paints a totally believable picture of what our future might be like as we get ready to explore and colonize Mars. Mega-corporations, earthly power struggles, and the selection process for determining who might get to be the first to go to Mars, are all very possible and Robinson crafts a story around these topics with ease.In the second book, "Green Mars," Robinson portrays the struggle to get vegetation growing and to create a breathable atmosphere. He also describes more political struggles between those on Earth and those on Mars. This was probably my favorite of the three, but mainly because I am more interested in the science that would be needed in this phase of colonization.In the third book, "Blue Mars," the planet become more Earth-like. The atmosphere is more developed, water travel becomes possible, and more. (I don't want to give it all away!)The books can be kind of scholarly at times, but I was so impressed with these books that I gave them to my teenage brother. He was so impressed with them, that he gave them to one of his very best pals. And we all had a blast discussing them together. If there is a teenage male in your life -- or if you love sci-fi and have always wondered what it might be like to go to Mars -- then this trilogy is definitely for you. Very highly recommended!

Published by Thriftbooks.com User , 23 years ago
This book is the closer in the superb eco-socio-sci-fi trilogy masterpiece that is the Mars Trilogy. The books have always been fascinating to read partly because of the way Robinson skillfully mixes dirt-under-the-fingernails realism with well-grounded flights of intellectual and scientific fancy. His characters have grown stronger, out of their essentially allegorical roles in "Red Mars," but they suffer a bit without a key crisis or two to rally around... this book is slower, longer, more verbose and more of a thought experiment than the page-turning "Red Mars," however, Robinson evokes the land and characters so well that I don't really think it's a problem.In summary, let me add that most of these reviewers seem to be jerks.

Published by Thriftbooks.com User , 25 years ago
Some disappointed readers seem to have missed the point of Blue Mars. This conclusion to the trilogy, rather than trying to outdo the earlier installments' brilliant technical vision, builds on them triumphantly! Of course, Mars is perceived differently by its inhabitants and earthlings alike when terraforming matures! The sheer struggle for survival evolves into much more sophisticated social interactions, between people (Robinson's cast of characters) and worlds. Who could fail to believe that terraforming of our close neighbor in the solar system would not lead to the expansion of the technique throughout the solar system as envisioned in Blue Mars. In the same way, as one reviewer noted, the character Ann matures in her ability to understand the ultimate impacts of terraforming. Not only the physical dimension evolves; the social dimension evolves just as fundamentally. Robinson's attention to the social aspects of his terraforming vision is really the strength of Blue Mars. His vision is powerful and detailed, just as were his earlier technical visions in Red and Green Mars. Interestingly, themes common to many recent cyberpunk works appear in this work as well. There seems to be a common vision of where our world humanity is destined to go, if not in physical space, then certainly in our inner spaces. Blue Mars was truly fulfilling as the culmination of this outstanding science fiction opus.
Trustpilot
Copyright © 2022 Thriftbooks.com Terms of Use | Privacy Policy | Do Not Sell or Share My Personal Information | Accessibility Statement
ThriftBooks® and the ThriftBooks® logo are registered trademarks of Thrift Books Global, LLC