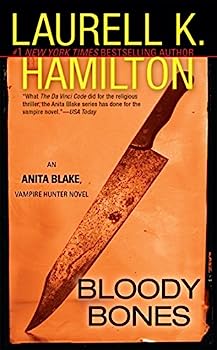 A look that kills for the fifth Anita Blake, Vampire Hunter novel. Here's a job to strain even Anita Blake's capabilities: raising an entire graveyard of two-hundred-year-old corpses. This description may be from another edition of this product.

Published by Amorcsn , 2 months ago
Very disappointed in the book I received. Order a book in "Good" condition. Book arrived in poor condition as it previously had gotten wet. Cover and pages are rippled, pages are discolored and it wrecks of mildew thank fully I can read this.

Published by Dani , 9 months ago
My favorite author, was just trying to update my collection and specifically ordered the cover pictured but I got a completely different one. Disappointed.

The best one yet! Lots of Jean-Claude!!

Published by Thriftbooks.com User , 18 years ago
It is official that I'm addicted to this series. I've even neglected the Merry Gentry series, Laurell K. Hamilton's faerie novels, which I started reading before the Anita Blake one. This is my favorite one to date. This series just keeps getting better and better! And the best part is that there is a lot of Jean-Claude in this one. The most I'd read him was in Circus of the Damned, and there are only bits and pieces of him in the other three, but he plays a more prominent role here. Bloody Bones illustrates the most challenging monsters Anita has ever had to deal with. Teenagers have been slaughtered in a small city of Missouri. The culprit is a creature unlike anything Anita has ever seen. It is stronger than a vampire, more dangerous and immortal to the core. To make matters worse, she has to raise an entire graveyard of three-hundred-year-old corpses to determine the fate of the graveyard's rather lucrative land, which is owned by a family of faeries. Anita suspects that the graveyard raisings and the murders are connected, and with the help of her friends she is determined to bring all of those involved down... Bloody Bones, like its predecessors, is nonstop action from beginning to end. The suspense is incredible, the fast-paced plot riveting. But it's more than just the action and suspense that kept me glued to this book. I loved that I finally got to know Jean-Claude in a deeper level. We learn more about Jean-Claude's background and history in a rather sexy bubble bath scene. JC and Anita fans will love to know that there is some closeness between them in this offering -- a fleeting closeness, but an important one nevertheless. And the best part is that Anita's werewolf boyfriend Richard is not in the way. I loved it! Laurell K. Hamilton describes Jean-Claude's sensuality in such a way that he's almost tangible. He's definitely one of the sexiest characters I've read. I also got to read about some great characters that were back after some notable absence, like Larry. I also like werewolf Jason. Anyway, this is my favorite offering. As said earlier, this series keeps getting better and better. I cannot wait to read the next one. In the meantime, I recommend Bloody Bones most highly...

Published by Thriftbooks.com User , 21 years ago
Bert, the owner of Animators Inc., and Anita Blake's nominal boss, is too greedy to refuse a fat fee. This time his compulsive avarice has got Anita in over her head. Her new client needs her to raise an entire graveyard of bones, many of which are over 300 years old. In addition, the client seems to have run a bulldozer through the remains - several times. Anita may be the only animator who is capable of accomplishing this, but even she is less than confident.No sooner is she at the gravesite when Anita is called in to help investigate some gruesome killings. Deaths which appear to have been done by the first serial killer vampire on record, one who specializes in the young. In her efforts to prevent further deaths Anita manages to alienate both the local police and the FBI. She also discovers that the small country town of Branson is sheltering several people with fairy heritage, and that they are not happy about her efforts at raising the graveyard.Realizing that she needs more help than Larry the apprentice animator, Anita decides to call in vampire Jean Claude. Unfortunately, Branson has it's own master vampire, Seraphina, who is much stronger than Jean Claude and will stop at nothing to take over the control of his own territory, St. Louis. In the process of trying to get information from Seraphina about the rogue vampire, Jean Claude and Anita are forced into an all out war with Seraphina and her powerful cohorts.The suspense goes from intense to extreme as Anita has one confrontation after another with her clients, the Fae, master vampires, and creatures from legend. She, Jean Claude, Larry, and Jason the werewolf are badly overmatched in a struggle where no one can be trusted and nothing is what it seems to be. Laurell Hamilton has put together a truly gothic roller-coaster ride.I am particularly fond of "Bloody Bones." Rather than perpetually introducing new cast members, Hamilton takes the time to dive deeper into characters the reader already knows from earlier volumes in the series. Even Bert gets a good bit of attention. This makes the characters come alive, and sets the stage for subsequent volumes where Anita has to deal directly with her problematic relationships with Jean Claude and alpha werewolf Richard Zeeman. If you are a Blake fan this is required reading. If you are new to the series I would suggest starting with an earlier volume in the series, although this volume still stands on its own

Anita Blake is really put through the wringer this time

Published by Thriftbooks.com User , 21 years ago
The titles of Laurell K. Hamilton's Anita Blake novels always refer to some sort of establishment frequented by monsters and while "Bloody Bones" is the name of a eating place out in the sticks it is also the name of something much, much worse. Anita Blake and her trainee Larry (not Lawrence) Kinkaid are out in the sticks of Missouri to raise a bunch of really old zombies to settle a development issue. But then Dolph calls Anita to tell her the local cops need her help with a murder investigation that sure looks to our heroine like an incredible fast vampire using a really big sword. Of course, these and every other plot line in the book are all related. The "romantic" triangle between Anita, Jean-Claude and Richard is pretty much on the back burner this time around, although Jean-Claude and his pet werewolf Jason show up to help Anita meet Serephina, the local master. Boy, does that ever turn out to be a mondo-mistake."Bloody Bones," the fifth book in the Anita Blake "Vampire Hunter" series, is similar to the previous couple of books. The menagerie of monsters continues to grow, with faeries and worse being added to the roster, while Anita's powers as a Necromancer continue to grow at the most opportune moments. In terms of writing pure horror, Hamilton knows how to lay it out big time. If Hollywood ever dared to film these books as she writes them they would be NC-17 (at least). Yes, Hamilton tends to play the same cards in getting Anita out of her dire predicaments, but as a writer of horror novels with scenes of disquieting intensity that will make it difficult for you to sleep at night, she has Lovecraft, King and Barker beat. She is so good at coming up with scenes of outright horror that go on and on, that I will not let my teenager daughter read these books.

Keeps getting better and better.

Published by Thriftbooks.com User , 21 years ago
This book is amazing!! Each books keeps getting better and better. I also like how Anita grows as you get further and further in the series. She's getting more powerful.As the plot of the book opens, Anita has to raise a few dead bodies that are a couple hundred years old to settle a dispute over who actually owns some land. Simple enough, right? Well if your a fan of this series you know that nothing is what it seems. This book is no exception. Soon Anita is in the middle of vampires, Zombies, and people who want her dead. This is nothing new in the life of Anita Blake. To make things more difficult, she has to call on Jean Claude, a master vampire for help. What's the big secret that people are being killed over? Read Bloody Bones and find out.As I said eariler, Anita is growing as the series goes on. She's tough as nails and twice as sharp.So far, this is my favorite book of the series. If you want to get as much pleasure from the book as you possible can, you need to start with the first book and work your way through. Give yourself a treat and read the seires.Hamilton has a writing sytle that keeps the reader glued to the page, and never let's them go. If you read this book, you won't be sorry.

This book takes a bite out of the vampire genre!

Published by Thriftbooks.com User , 25 years ago
This book blew me away. It was a different type story than the usual vampire series. When the cover of the books states "Anita Blake-Vampire Hunter", you can't help being interested. Anita Blake is a self=assured monster hunter in a short skirt who carries an aresenal around with her at all times. She also happens to date both a vampire and a werewolf in her spare time. In this book, there seems to be two separate stories that meld into one. First she is asked to animate the dead to settle a land dispute in Branson, Missouri. While doing so, she is called into a police investigation of the slaughter deaths of three teenage boys. Then another death of a teenage girl in her home-drained of blood. Along the way with the help of another animator co-worker and her vampire boyfriend, Anita works to solve the mystery of Bloody Bones. I truly enjoyed this book, even though a first-person commentary is not usually my style, in this book it really works. Anita Blake has a biting persona that makes for a fun read whether you are into monster stories or not. Remeber this is not the first book in the Anita Blake series. I happened to read them in a backwards order, but it did not take away from my enjoyment
Trustpilot
Copyright © 2022 Thriftbooks.com Terms of Use | Privacy Policy | Do Not Sell or Share My Personal Information | Accessibility Statement
ThriftBooks® and the ThriftBooks® logo are registered trademarks of Thrift Books Global, LLC