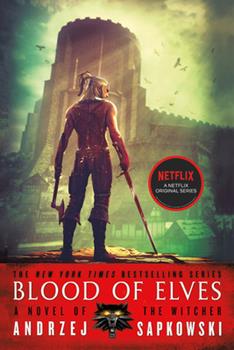 Soon to be a major Netflix original series The Witcher, Geralt of Rivia, becomes the guardian of Ciri, surviving heiress of a bloody revolution and prophesied savior of the world, in the first novel of the NYT bestselling series that inspired the blockbuster video games. For over a century, humans, dwarves, gnomes, and elves have lived together in relative peace. But times have changed, the uneasy peace is over, and now the races are fighting once...

Published by Thriftbooks.com User , 12 years ago
In a world scarred by war, in a world where racial tension grows every day, in a world where political games are played at the expense of innocent people, in a world where all hope seems lost, a young girl shines like a light in a stormy coast. This is the story of young Ciri, the Witcher called Geralt of Rivia - the white wolf - and Yennefer the enchantress. Will they be able to protect Ciri? This task will prove difficult. Who can they trust? Who is friend, who is enemy? I had wanted to find some time to read Blood of Elves for a while. It generated some buzz on the online forums and I wanted to try out one of Sapkowski's books. Recently it pushed itself up in my to-be-read pile and it landed on my lap a few days ago. So I decided to read it... Blood of Elves is a Tolkienesque fantasy book, which, I believe, would please a young adult audience as much as a mature one. The book successfully contains the expected traits of such a world. For example, it is a world where many races such as elves, dwarves, gnomes and halflings live together. Sapkowski's style is very fluent and Blood Of Elves is a fast paced book. I must admit that the author's style, or the fact that he dances among various styles, really surprised me in the beginning. The book contains enough descriptions to imagine and visualize the setting however the author doesn't use much description during conversations. This creates a fast paced story but sometimes it forces the reader to deduce what's happening around by what's being said in the conversation as opposed to what's being described as part of some description. And rarely, the author uses a more poetic and sharp style with a series of short sentences. There isn't much character development throughout the book. I thought the most intriguing protagonist was Yennefer the enchantress whose character was the best developed. Yennefer gets more focus during the second half of the story whereas the first half is mostly about Geralt, the mysterious protector of Ciri. All in all I really enjoyed this book. Despite having had high expectations I wasn't disappointed. Blood of Elves comes across as the opening book of a long series and it promises much better things to come. I'm just hoping that we'll be able to read the English translations of the other books in the series soon.

Published by Thriftbooks.com User , 12 years ago
Different from the first but still enjoyable. The ending is abrupt, it's too bad we have to wait awhile for more.

A solid novel, not just vignettes.

Published by Thriftbooks.com User , 12 years ago
This book is a must have if you enjoy the "Witcher universe", but not if you're hoping for another collection of 'whiz-bang, sexy sword slinger' short stories, ala Last Wish. While I enjoyed the Last Wish quite a bit, this is a notably different outting - a complete novel set in the Witcher universe, with an actual story arc, a longer tale to tell, and promises of more to come in future books... GREAT! This book explains (among other things) the beginnings of the Scoia'tael (Squirrel) movement, how the various races came to inhabit their corners of the world, more info on Triss Merigold, Shani, Dandelion, and a host of other interesting characters. Kingdom level politics are discussed, pursuits and narrow escapes ensue, and assassins, torturers and sorcerers abound. Geralt is present all through the book, weaving into and out of other character's lives. He is not 'absent' from the book at all... it's just that each story isn't focused exclusively on him. The overall framework of Ciri's maturation as a enchantress is interesting and appropriate, not boring or drawn out, in my opinion. Geralt is revealed through other characters eyes as a more interesting and conflicted warrior - perhaps moodier and more withdrawn than we might expect, but more complex. He's far less cocky in this book, which may put some people off if they were expecting the white-wolf swagger. So... less "swords and babes" overall, more plot and story arc... I enjoyed it thoroughly, and read it in one sitting. Can't wait for the rest. Side note: anyone who has played and enjoyed "The Witcher" PC game will see lots of it in this novel, and appreciate the book even more.

Published by Thriftbooks.com User , 13 years ago
Geralt, the title character, is a 'Witcher' - one of a semi-secret society of monster-killing specialists. Already born as mutants (a word bandied around anachronistically throughout the book), Witchers are then trained and chemically altered to become killing machines. All hopped-up on primitive combat drugs and armed with meteoric swords, Witchers travel the world killing nasty beasties. Preferably for money. Although Witchers are scrupulously neutral in matters of politics, Geralt has broken the code by adopting an orphaned princess, Ciri. The heir to a conquered kingdom, Ciri is one of the most valuable people in the world. The forces of light and darkness are both competing to find her - and that's even before her potent magical powers begin to surface. Geralt and his network of friends (more acquaintances) are drawn reluctantly into the vortex of events surrounding Ciri and soon become irrevocably linked to the fate of the world. Ciri, to give the author credit, is never just a passive object in her own destiny. In fact, she receives much more 'screen time' than anyone else in the book, including Geralt. Her education, training and rambunctious gallop towards maturity are the core of the book. Geralt, and the more conventional adventuring elements that surround him, only appears in alternate chapters - generally fighting off some sort of insidious plot that would otherwise threaten the young princess. Geralt also takes a backseat to some of his companions - Yennefer and Triss, the witches, and Dandilion, the entertainer and spy. All are drawn to Ciri and the need to protect her - either from loyalty to Geralt or to the greater scheme of fate. They're all interesting characters (I'm partial to Dandilion), although Sapkowski spends more time than is comfortable having Triss muse about her youthful sexual explorations. In fact, Geralt mostly appears through the eyes of others. Even Dandilion is less loyal to Geralt-the-person as he is to Geralt-the-excuse-for-an-adventure. The conflicting viewpoints keep Geralt mysterious, but also keep on the right side of the line when it comes to outright veneration. While Ciri worships Geralt, Yennefer sees the Witcher as an outright annoyance - an emotionally-stunted ex-boyfriend with a knack for doing the wrong thing. The overall plot is pleasantly confusing. There's definitely a big prophecy out there, and the big evil empire is sufficiently big and evil. Our heroes, however, are more interested in saving their own skins. They encounter the creeping arms of evil, but only in tangential ways - local uprisings, the occasional assassin. The author occasionally takes the reader to someplace quite random - for example, the high conclave of Wizards, or a gathering of monarchs - to give the bigger picture. However, we learn very quickly that these important dignitaries know even less than the little guys. Whatever is actually happening, only Sapkowski knows. The main flaw in the book is the translation. 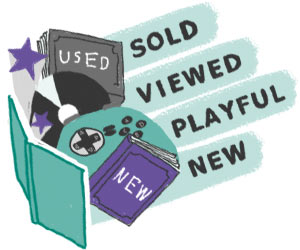 Welcome to Sold, Viewed, Playful, New, where we spotlight popular/fascinating/favorite items in four distinct categories. Sold, for used books. Viewed, for DVDs or Blu-rays. Playful, for board, card, or video games. And New, for new books. Check out our selections—we're sure you'll find something to intrigue you!