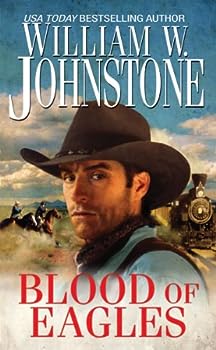 (Book #8 in the Eagles Series)

This description may be from another edition of this product. The Greatest Western Writer Of The 21st Century From "USA Today" bestselling novelist William W. Johnstone, author of the acclaimed "Mountain Man" and "Preacher "series, comes "Blood Of Eagles, " the...

Another chapter in the Falcon MacCallister saga

Published by Thriftbooks.com User , 13 years ago
This is a great book, just as exciting as the others in the series. Up till now, I had not been aware of the series title, "Towering Eagles". But, as usual with Johnstone's work, it is hard to put down after reading for a while. The urge to skip sleeping is great, but eventually the body takes over and you can't read another page. We start with his discovering the recently-butchered Blanchard family, and after burying the parents and young girls, he takes off after the killers, not realizing that he is about to make big problems for a gang of land swindlers. Early on, he befriends a young Indian boy, who though only 12 has the skills and desire to avenge his own parents who have been killed by members of the same land-swindler gang. The action takes place primarily in the no-man's-land between Texas and Kansas, and along the trail of the killers Falcon is bushwhacked, badly hurt. He wakes to find himself being cared-for by some of the relatives of the Blanchards, who had found him and taken care of his wounds. HIs new friends are the Masons and their cousins. With the Mason family, who are settling down on land the swindlers intended to sell to gullible railroad investors, Falcon works hard to get well, eventually devising a corset-like affair to keep his bandages and wounds from being damaged as he fights with the Masons. They befriend the newly-established settlers, whose farms the swindlers also want unoccupied, and the land-grabbing gang is quickly under attack and their fellow baddies are getting killed or badly wounded. This is another fine book in the MacCallister family story, and I highly recommend it to all who love great and exciting writing.

Published by Thriftbooks.com User , 14 years ago
I enjoyed all of Johnstones book I've read so far, this one has losts of action, you enjoy the fast read.

Published by Thriftbooks.com User , 21 years ago
AS USUAL JOHNSTONE HAS WRITTEN ANOTHER EXCELLENT BOOK IN THE "EAGLES" SERIES.
Copyright © 2020 Thriftbooks.com Terms of Use | Privacy Policy | Do Not Sell My Personal Information | Accessibility Statement
ThriftBooks® and the ThriftBooks® logo are registered trademarks of Thrift Books Global, LLC