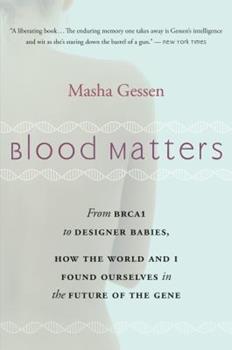 Blood Matters: From Brca1 to Designer Babies, How the World and I Found Ourselves in the Future of the Gene

Masha Gessen discovered through genetic testing that she had the dreaded BRCA1 genetic mutation--the same mutation made famous recently by Angelina Jolie, which predisposes women to ovarian and breast cancer. As Gessen wrestled with a wrenching personal decision--what to do with such knowledge--she explored the landscape of a brave new world, speaking with others like her and with experts including medical researchers, historians, and religious thinkers...

Seldom I find any work of nonfiction that proves to be a page turner, but this one is an exception!

Published by Thriftbooks.com User , 12 years ago
Sometimes it is difficult to fathom that one's fate may be predestined at the moment of conception. A predisposition to disease, addiction or even a behavioral pattern is stored in an embryo in an instant. Masha Gessen received a devastating call early in the year 2004 that changed her life and way of thinking. "In the BRCA1 gene, there is a deleterious mutation . . . I'm sorry." Her BRCA gene, or breast cancer gene, was now a harbinger of possible disease and death. It wasn't simply the luck of the draw, it was her genetic inheritance. Masha, well-known journalist and author, ponders her fate and those of others in her intensely riveting book, Blood Matters: From Inherited Illness to Designer Babies, How the World and I Found Ourselves in the Future of the Gene. As a midlife Ashkenazim Jew Masha's decision to opt for genetic testing was the beginning of a life altering search for the gene, its hidden agenda and impact on her life. She'd have to think long and hard before she allowed any surgeon to slash into her body to remove her breasts and yank out her life-giving ovaries. Although Jews were well known as genetic guinea pigs and she began to think not only of her genetic inheritance, but of others in similar circumstances. Susie was a young Amish woman who loved children and most likely wanted a lot of them in her life. When her first child was born, nothing was amiss, yet when the others came along there was something terribly wrong. Levi, Sylvain and Steve were born and soon became seriously disabled. Sylvain died very suddenly in the back of the carriage. Later Levi died and then more babies came along. What would be their lot in life? Then there are the children with Maple Syrup Disease, Tay-Sachs, cystic fibrosis, Niemann-Pick and numerous other devastating diseases. What will happen to them in the future? What will happen to those yet unborn? Gessen ponders and discusses our collective genetic whack with both alacrity and well-informed solemnity. Seldom I find any work of nonfiction that proves to be a page turner, but Masha Gessen's Blood Matters proved to be the exception to the rule. There didn't appear to be any rhyme or reason to her choice of stories as she hopped from one genetic topic to the next, but I was utterly fascinated. Most of the focus was on the Ashkenazim Jewish genetic legacy or Jews in general, but it made no difference in my high level of interest. From her short treatise on designer babies to her own personal quarrel with her genetic makeup I kept turning those pages. This book is a definite "must have" for anyone interested in taking closer look at themselves and all humanity.

Published by Thriftbooks.com User , 12 years ago
This book is very well written in some ways, and a very honest and complete-- not to mention, compelling-- journey through the recently discovered quagmires of genetic testing. However, there are some fleeting references to events or people that leave the reader hanging, and some of the science is a little hard to follow-- she ventures into about 6 territories at once. I must also add that there is a bit about the author which creeps me out: she talks about the possibility of losing her breasts, and that one of the terrible consequences is that her toddler daughter will be deprived of a favorite comfort-- that is, holding her mother's breasts. That's just sick. But if you can get past that sort of thing, the book is very informative and very helpful for anyone in this situation.

Published by Thriftbooks.com User , 13 years ago
This book is one of the few books on genetic screening that gives you a feel for the topic. It does this through personal journey as well as investigative journalism blending the two so as to explore the implications and inevitable consequences of genetic screening. It covers cancer, huntingtons and other rare hereditary conditions and illuminates the burdens and reliefs the current knowledges can provide. It is easy to read, compelling and wise. My only criticism would be the chapter on prenatal screening - this was not as well thought through and lacked the wisdom of the rest of the book. All in all it is a considerable achievement and I would highly recommend it to the general reader as well as those with a particular interest in medicine.

How genetic information is reshaping the decision-making process

Published by Thriftbooks.com User , 13 years ago
BLOOD MATTERS: FROM INHERITED ILLNESS TO DESIGNER BABIES, HOW THE WORLD AND I FOUND OURSELVES IN THE FUTURE OF THE GENE tells of genetics using the author's foundation of experience as the starting point. In 2004 she was told she had a mutation that predisposed her to ovarian and breast cancer: the problem proved what to do with this knowledge. BLOOD MATTERS explores how genetic information is reshaping the decision-making process - and how these new decisions are reshaping knowledge of self. Any general interest lending library strong in health references will find this an excellent lend - as well as college-level collections strong in genetic health books. Diane C. Donovan California Bookwatch

a sharp mind focused on a difficult problem

Published by Thriftbooks.com User , 13 years ago
I took to Masha Gessen's writing immediately. Smart and inquisitive, she asks interesting questions and she displays both genuineness and insight over the course of her journey to make and justify her decision to undergo prophylactic mastectomies. She reveals moments when her professional facade breaks down and she finds herself reduced to a scared woman hoping the experts she consults can give her the wisdom she seeks. All through her story, however, she maintains an honesty and human sense of connection that makes this book an engaging read. Her search through the medical system, through economics (as the science of decision-making), through psychology and aesthetics, and through applied genetics makes fascinating reading. Anyone interested in locating the right questions to ask about genetic science and in considering the opinions of some of today's leading-edge thinkers and practitioners in this area will enjoy this book.
Copyright © 2020 Thriftbooks.com Terms of Use | Privacy Policy | Do Not Sell My Personal Information | Accessibility Statement
ThriftBooks® and the ThriftBooks® logo are registered trademarks of Thrift Books Global, LLC