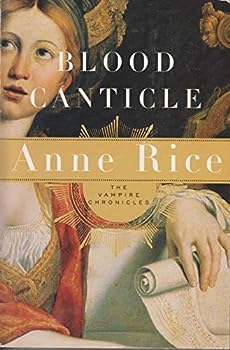 (Book #10 in the The Vampire Chronicles Series)

Existential and great and sadly misunderstood

Published by Thriftbooks.com User , 12 years ago
Blood Canticle is by far the most stripped down raw and honest installment of The Vampire Chronicles. I have read them all dozens of times. I am not sure where all the hostility towards this novel comes from all I can offer are my own insights. Spoilers: This novel starts with an interesting open. Its a glimpse of where our narrator (in this case Lestat) is currently at heart and soul wise. Brilliant open really curious insight into his mind. Sometimes I think that since its been so long since we the reader have heard from Lestat, well I think this could really sum up this novel in a whole, but I truly feel that the Lestat some had in their minds ceased to be once Memnoch reached its end. Since that point there have been glimpses of Lestat in other novels but not the man himself. I guess overall the audience who found this novel tough to digest were angered maybe because there was no answer to what happened to him during his slumber. As for the open lots of wonderful moral questions and solutions that could be found if only Lestat could become a Saint, themes to play out and the stage is set for a novel (whether you liked it or not)we did not see coming. Again this did not surprise me character wise and I am kinda surprised that the hater audience for this novel latched on that idea so much. Do you all not remember Lestat as a human long ago wanting to be a priest? Its almost like it never happened I know it was so long ago but I laugh at the notion that this novel lacks character development. On the subject of Character development. I should say that for the first time I could recall the mortals in this story far outweigh the immortals, which I found to be a breath of fresh air. I loved all the characters that emerged from Blackwood Farm and was happy to see them again. As for the development of the Mayfair's that was brilliantly handled by Anne Rice. What a treat it was so revisit them again, Michael and Rowan (who I love the most of the whole Clan Mayfair) and Dolly Jean, Uncle Julien, Stella and of course the roving harlot herself Mona and Mona of course still dealing with the effects of the Taltos ironically becomes a thing apart from humanity much like the Taltos she birthed so long ago. There are several intense short brilliantly written chapters in this novel one of my favorite being Lestat in the hotel room with the drunken woman waiting for the hit man. Pure brilliant writing short and brutal and beautifully written. The other is Lestat speaking of his love for Rowan Mayfair. Very intense writing there. The long and short of Blood Canticle is this. Its been more then 30+ years of Vampires and Witches. The two central characters of both worlds fall hopelessly in love with each other. And never has love felt so helpless in reading of a Anne Rice novel? The choice Rowan and Michael made to not go into the unknown at the end of Taltos lead to Rowan going to Lestat at the end of Blood Canticle. All of the horrid choices Lestat made

I loved the book. I cried at the end.

Published by Thriftbooks.com User , 13 years ago
First off, I don't believe the negative reviews are real. I agree with Mrs. Rice that there is something askew there. The distribution of reviews is not like her other books and something is strange there. I loved this book. I cried at the end. I can't believe people were so harsh on this. I've read all the books now and LeStat is himself in this. He's vane, brutal and funny at times. He hardly used gangster language in the book and it's in jest. I can't believe the fuss over that. He's with 21 century young people, so what did we expect? He can't stay in the past. He's LeStat in all his glory, but he eventually learns what true love is. He doesn't describe Rowan much. He doesn't look at her physically like he looks and describes everything and everyone else in his shallow life. He wants to be bad, but he's good and he finally loves another person's soul for who that person is and not what they look like. Even with Talbot he found him handsome even as an older man. We don't get a really good description from him of what the female Dr. Rowan looks like. She's nothing outstanding and he isn't really into what she looks like, but he sees her soul. He finally realizes what true love is and not the shallow love he tends to get involved in. He sacrifices his soul for true love and that is the beauty of this book. At times his comments on himself had me laughing and the ending had me crying. Well done!

Published by Thriftbooks.com User , 13 years ago
First, I would like to say that I have no idea why there are so many people writing negative reveiws about this book. Why is there controversy over it? Actually, the people who wrote these comments don't seem to understand fiction - or the Anne Rice (in her vampire days), for that matter. I am a fan. Here's the deal. If you are a Anne Rice fan - you will love the book. My suggestion - don't read it without picking up the Mayfair Witches series. I read them all, and Blood Canticle weaves all the worlds together, quite nicely. I read something about how the person didn't like how she wrote some of the characters - but I don't think they understood the power of Lestat, or the allure. A new leader emerges from this - and could bring up a "new" world, but unfortunately, we would never know. Yes, the book does start of kind of slow, but towards the end I was fascinated. Is it the best out of the series? No. but, everyone has it's favorites. Is it the worst? Certainly not. And the most compelling thing - the return of Lestat. It's a great piece to add to the collection. Do not let "controversy" (over what, i can't even contemplate) steer you away. Anne Rice is as she always was, and her story is a treasure. I am sad to see the Vampire Chronicles come to an end. She is, and always will be, the best author in vampire (and witch) lure. But dear one, see for yourself.

Rice Still Has a Trick or Two Up Her Sleeve

Published by Thriftbooks.com User , 18 years ago
When I first read the reviews for "Blood Canticle" my heart sank--I had been looking forward to a good read, Anne Rice style. I requested the book as a present, so I was still obligated to read it, regardless of the negative reviews. I admit, the first 115 pages or so are rough, as described they are filled with a manic, egocentric rant by the vampire Lestat. Once the rant has time to play itself out a wonderful, curious and intriquing story is revealed--that of the Taltos. Those of us who are Rice fans will already be familiar with the Taltos, yet this story reveals more details concerning the character of these unique beings. I give the book five stars because if you survive the hackneyed beginning at the hands of Lestat, a whole new world is revealed. Rice is not all washed up or rung out from mourning, she still has a trick or two up her sleeve. If you enjoy having your vision of the world and its wide variety of beings revealed in vivid detail, give "Blood Canticle" a chance. With patience you will find that the rambling of Lestat is there to create a counterpoint to the languid world of the Taltos. Moreover, those who shy away from goth, will find that the Taltos offer a sci-fi element that is refreshing. Rice is a gifted writer, mistress of detail who is so brazen that she even combines several different genres (horror, science fiction, the fantastic and romance)successfully, between the covers of a single book. You go girl!

'The blood that teaches life will not teach lies'

Published by Thriftbooks.com User , 19 years ago
Bravo, Anne Rice. If you must leave the vampires, for a moment; for now; forever...you have left them in style.Blood Canticle continues to renew my interest in Anne Rice. For years I have followed the vampires' exploits...and for a long period of time was very disappointed in the fact that it all seemed to be familiar territory, time and again.Then along came Blackwood Farm; which took my breath away. Blood Canticle is what I would term an 'extension' of that story. But not only that, it is a continuation of the Mayfair Witch saga; as well as a (purported) finale to the story of Lestat.Quinn Blackwood has most everything he wants; he has been rid of his ghostly shadow, Goblin; his hated mother Patsy has been dealt with; Mona Mayfair has been brought over to the realm of the undead, to prevent her mortal expiration from the ravages of disease left behind by events relayed in Lasher and Taltos; and his new friend Lestat is completely enraptured with him.Mona Mayfair, the headstrong designee of the Mayfair Legacy was prepared for death, which she did, in a manner of speaking, meet. But that mortal death has brought her a new 'life'; that of the vampire, and an eternity to spend with her beloved Quinn.Lestat still seeks redemption for his soul...having met with angels and demons in Memnoch, the Devil he wants 'to be a saint, ...to save save souls by the millions, to do good far and wide, to fight evil'. The 'Brat Prince' of the undead wants to be delivered into salvation, despite his evildoings. And he wants Rowan Mayfair, the beautiful, mysterious, strong-willed doctor who desperately wants Mona to return to her so that she can help her die in peace, not knowing that Mona has been given the gift of the 'Dark Blood'.Once a vampire, Mona realizes that her life will never be the same, and that a whole new existance is open to her. But there is one final door that she must close on her human life...one final question that must be answerd; the fate of Morrigan, the daughter she gave birth to years before, who disappeared with Ashlar, an ancient Taltos, never to be seen again.Lestat, Quinn, and Mona search for Morrigan, and any other surviving Taltos, while Lestat searches for an end to his own quest. And when Rowan returns Lestat's interest, his determination grows all the stronger to help Mona, and Rowan.In this supposed finale to the Vampire series, Anne Rice ties up the loose ends of some of her more recent works, and the Mayfair series. While this book will not give you insight into the further stories of Armand, Louis, Marius, or the other blood drinkers Rice has made famous, fans have been clamoring for a book in Lestat's voice for years. And Rice has delivered.This book, the 12th in her Vampire Chronicles, is a fine addition to Anne Rice's tales of the undead. Read it, savor it...it could be the last one for all eternity. 'And love becomes again my reprimand, my goad, my song.'
Trustpilot
Copyright © 2022 Thriftbooks.com Terms of Use | Privacy Policy | Do Not Sell or Share My Personal Information | Accessibility Statement
ThriftBooks® and the ThriftBooks® logo are registered trademarks of Thrift Books Global, LLC