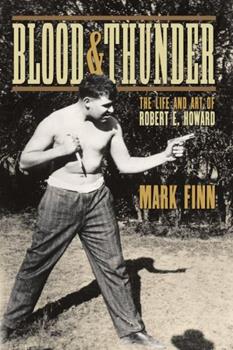 Blood and Thunder: The Life and Art of Robert E. Howard

This description may be from another edition of this product. Robert E. Howard, creator of Conan, King Kull, and others that defined heroic fantasy, lived and died in the small town of Cross Plains, Texas. While his books remain in print, Howard himself has...

Published by Thriftbooks.com User , 13 years ago
Mark Finn's biography of Robert E. Howard is an interesting read & well worth the time for any fan of REH's work. Mr. Finn's examination of Howard by referencing his Texas roots has been mentioned by other reviewers & I'll not echo that here. Let me just say that I believe this treatment allows for a very unique & convincing testament that a writer's environment can & does influence his work. What I enjoyed the most about this book, though, is Mr. Finn's documenting that REH was first & foremost a story teller. I firmly believe that this was the reason the man wrote in so many different genres. He wanted to tell a great story & sought an eager audience for his work. Yes, a great deal of his prose can certainly stand alone on its literary merit. I don't think, however, that this was as important to REH as the tale itself. As far as I'm concerned, on this he had no equal. I challenge anyone seeking a great tale of action/adventure to spend some time with Mr. Howard's work. You'll be glad that you did. The last point I'd like to make concerns Mr. Finn's portrayal of REH as a relatively normal, though somewhat fragile, human being given his circumstances & environment. It's funny to think of such a giant of a physical speciman who enjoyed engaging in fistfights as fragile, but I believe Mr. Finn proves this assertion. Why is it that so many creative geniuses seem to be tormented by demons who eventually consume them? I can quickly name Howard, Van Gough, & Cobain in different disciplines. A lengthy list could easily be compiled in a short time. I appreciate that he doesn't seek to sensationalize REH's story as other's have done. Mr. Finn draws upon all of the material he had presented on his subject to explain the suicide. He doesn't attempt to make an apology or rationalize the act. He makes the case that, to REH, suicide was the final confirmation that he alone held control over his existence. Mr. Finn asserts & I agree that REH saw it as an act of bravery rather than of cowardice. No, this isn't Society's view, but it was Howard's. All of these things & an examination of the Howard mythology makes for a fascinating book. A great & worthy read & congratulations to the author!

Published by Thriftbooks.com User , 13 years ago
This is a must have outstanding book! From Book "About the author: Mark Finn is the recipient of the 2005 Cimmerian Award for Outstanding Achievement in Robert E. Howard studies, and a critically-acclaimed scholar, author, essayist and playwright. Finn is an expert in 20th century pop culture and genre studies, and is not to be trifled with. Robert E. Howard the creator of Conan the Cimmerian, Solomon Kane, King Kull, and many other characters that helped define the genre of heroic fantasy, lived all of his thirty years in the small town of Cross Plains, Texas. While his books remain continually in print, Howard himself has fallen into obscurity. The details of his personal life have become mired in speculation, half-truth and lies. This engaging biography traces the roots of his writings, correcting many long-standing misconceptions, and takes us on a tour of Howard's world as he saw it best: through his own incomparable imagination." There are some nice pictures included, too! Dedication - 'This book is dedicated to anyone who ever drove to Cross Plains, Texas, stood in the doorway of Robert E. Howards's room and felt a perceptible chill at the thought of being so close to where he created his blood and thunder. The lamp expires, but the fire remains." Check out the REH Foundation & Forum.

Published by Thriftbooks.com User , 14 years ago
I read the old Conan 1-12 Ace published paperbacks religiously as a teenager, and have delved back into them (or the Del Ray Conan re-prints) for a re-read from time to time. I have always counted Howards Conan stories among my favorite books. As far as Howard himself I always found him to be a fascinating but confusing figure. I had heard such wildly varying stories of how he was. On one hand he had been portrayed as a macho, brawling, boxing, roughneck fitness fanatic, that in some ways mirrored Conan and some of the characters in his other work, and on the other hand I had heard he was a mental basketcase mamas boy that died a virgin when he commited suicide at the age of 30. Since reading this book I have come to the conclusion that there is a ring of truth to both of those extremes. Finn does a great job with this book connecting the dots and proving and disproving much of the mythology that is out there about Robert E. Howard. A big thing Finn does here, in fact it comprises a good bulk of the book, is he talks about Howards Texas environment and how much of an influence it was on his writing. From the day to day violence that he was exposed to in the scoundrel and roughneck infested oil boom towns that he grew up in, to the local Texas folklore, to the front porch story tellers that held court while Howard gave listen. All of these had a big impact on Howard and his writing. REH even stated that Conan himself was to a large degree a mix of various boxers, oil field workers and cowboys that he knew over the years. This book also goes into greater depth with Howards non Conan work than anything else I have ever read. In some ways this book is as much a literary analysis of Howards writings as much as it is about Howard himself. Other subjects delved into are his relationship with his only girlfriend, his ups and downs as a pulp fiction writer, his physical fitness and boxing obsession, his feelings as an outcast in the small town he lived mainly because he earned a living as a writer instead of in the oil field or as a farmer, his legendary correspondses with HP Lovecraft, and especially his strange relationship with his parents (he never moved out of his parents house) and Howards suicide. I do think this is a great book. There is so much great information in this and Finn is an engrossing writer, I could hardly put this book down once I started reading it. But I do have a few criticisms. One he goes into apologetics over Howards attitudes on race. Downplaying and even denying that Howard was a racist as well as making the false statements that Eugenics have been scientificly discredited, the Aryan race does not exist and Finn also makes the wacky statement at one point that what was once called race are now referred to as "cultures". Huh? We must be living on another planet. But anyway while I think you could make a solid argument that he wasn't a racist in the stereotypical Nazi way and he certainly wasn't mean or abusive to people bec

Published by Thriftbooks.com User , 15 years ago
Mark Finn's biography of "Conan the Cimmerian" creator Robert E. Howard is superb - very fair and measured across the board, especially on such controversial subjects such as REH's suicide and chronically overlooked issues such as his non-Conan literary production. You really get a very full and illuminating examination of the author's upbringing, family and Texas background. One could had hope more about Howard's poetry or about his heritage and influence on the writing of heroic fantasy and on specific writers such as Karl Edward Wagner or David Gemmell but that would be nitpicking. The only criticism is that the book is too short!

Published by Thriftbooks.com User , 15 years ago
With enthusiasm, skill, and expertise Mark Finn has written the new and definitive biography of Robert E. Howard. Finn not only corrects a number of errors previous biographies and biographers made about Howard and his writings, Finn also describes, with sensitivity and nuance, Howard's environment and upbringing and the context in which Howard's work should be placed. Finn neither places Howard on a pedestal nor demeans him, but instead gives Howard the credit he deserves. Howard could not hope for a better biographer than Mark Finn, nor a better biography than Blood and Thunder.
Copyright © 2020 Thriftbooks.com Terms of Use | Privacy Policy | Do Not Sell My Personal Information | Accessibility Statement
ThriftBooks® and the ThriftBooks® logo are registered trademarks of Thrift Books Global, LLC