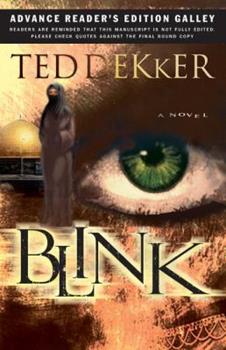 The future changes in the BLINK of an eye...or does it? Seth Borders isn't your average graduate student. For starters, he has one of the world's highest IQs. Now he's suddenly struck by an incredible power--the ability to see multiple potential futures. Still reeling from this inexplicable gift, Seth stumbles upon a beautiful woman named Miriam. Unknown to Seth, Miriam is a Saudi Arabian princess who has fled her veiled existence to escape a forced...

Published by Thriftbooks.com User , 12 years ago
This is the best book Ted Dekker ever wrote. My personal favorite. Mi gusto mucho.

Published by Thriftbooks.com User , 13 years ago
Several years ago, bestselling author Ted Dekker published his fictional adventure-love story BLINK, which is now being re-released under a revised title, BLINK OF AN EYE: Love Changes Everything. With new added content, Dekker tells readers in a question/answer section at the close of the text how and why this expanded version is different from the original. The reason? In a word, movie. BLINK OF AN EYE is being made into a major motion picture (which is set to release in 2008), and Dekker says that the theme of love has stayed primary in both the book and the on-screen version. He believes that with the current climate of distrust between Americans in general, even amongst American Christians, and those living in the Middle East, this overlying theme of love extending across a variety of spectrums is more important now than ever before. Avid fans of Dekker's will appreciate his candor and personal take on the rigorous process of transforming the written word into a likewise equally compelling big-screen hit. The new book opens with Miriam, a Saudi princess, who helps prepare her best friend Sita for her arranged marriage. What should have been a glorious day of celebration abruptly turns deadly, and Miriam begins questioning the religious system she has been reared to conform to and believe in, and the culture to which she was previously loyal. Without missing a beat, Dekker quickly puts Miriam through the paces of making life and death decisions as she tries to escape a fate similar to her friend Sita's. Thankfully, for this fictional princess, she has both money and a plan in place. Enter beyond-genius college student Seth Border, a once-abused child whose mental abilities and penchant for bucking authority get him into hot water with the powers that be. Seth's path quickly intersects with Miriam's at the U.S. college where she flees for help, and Seth becomes Miriam's protector and fellow renegade from both U.S. and Saudi officials. What gives the couple an edge is Seth's increasing ability to foretell potential future events. He sees multiple possible scenarios in advance, and as they traverse the country trying to avoid assassins, the king's hired guns and the American government, Seth and Miriam forge a bond of trust and love. But what kind of love? Brotherly love or romantic attraction? Before the last page is turned, readers might well wonder how anyone, even a person with Seth's intellect, will figure out a way to garner freedom for Miriam when two governments are bent on realizing their own self-serving ends. Dekker writes a fast-paced story that will have readers pausing only in those brief spaces where Miriam and Seth have a few moments to reconsider their own strongly-held convictions about God, faith, men and women's roles, as well as their black and white cultural conflicts. Like all of Dekker's books, humor is a welcome and expected ingredient that helps balance out the weightier matters the author poses. This newly-rev

Not your normal princess in distress

Published by Thriftbooks.com User , 14 years ago
Miriam lives in Saudi Arabia and is a princess. Seth lives in California and has an IQ that makes him a threat to the government. They are worlds away, almost destined never to meet. But arranged marriages, honor killings, secret flights across the world somehow manage to make the pair end up together. Fast past action, shockingly realistic events make this story a thrill ride to read with a forbidden love story thrown in between. *Note: This book is a updated re-release of Blink which was originally published a few years ago* This was my first Ted Dekker book that I have read. Well, I have read House, his collaboration with Frank Peretti, but this is the first full Dekker book that I chose to pickup. This book was actually different that what I thought was going to happen. I know Dekker's other works are more suspenseful or fantasy-ish. I had watched the movie Thr3e and had enjoyed it very much. Reading this book made me feel like I was watching the nightly news. This plot in this story is so relevant to this day and age. I liked Miriam's character very much. Without a doubt, she's one of the strongest female characters I've read in a while. This is mostly because she lives in an environment where she is not supposed to be strong. I was actually glad that Seth was sort of a dorky character. I think previous stories like this have always had an athletic, brawny, strong guy win the princess's heart. Actually there was even a part of me that was scared that if someone from the Middle East were to read this book, they might get insulted. The book was very well researched with regards to culture. This is also an action packed book, where the results can be quite intense and gory. If you have a squeamish stomach, I do not recommend reading this book. There are several scenes where it's almost too difficult to read because you know that scenes like this are taking place in the world. It brings awareness to the plight that many women live on the other side of the world. It really makes you feel grateful for the freedoms we have in our country. While there is a romance story, there is more than enough action to make up for male readers who hate romance. I would recommend this book to those who like a true, could have really happen story. Will definitely be looking forward to the movie of this book when it comes out.

Make not mistake this IS BLINK!

Published by Thriftbooks.com User , 14 years ago
I purchased this book thinking it was a new book maybe in a series, but this is just Blink with a new title. I loved blink, but I did not want to purchase it again.

Published by Thriftbooks.com User , 19 years ago
Four and 9/10s stars because only one book, The Grapes of Wrath, gets five stars. I finally decided to give Dekker a whirl after seeing dozens of rave reviews from critics and readers all over the place. I picked up a copy of BLINK, his latest book and, ignoring my last minute Christmas shopping, I sat down for an evening of reading. It turned out to be a weekend. I could not put this book down. Some disconnected PW reviewer who probably hated the Matrix may not like Dekker's assertive writing style, but I now see why the rest of the world is getting excited about this new writer. BLINK is absolutely brilliant! It's the way he weaves theme through a riveting plot that impressed me most. In short, Seth is a genius on the run with a Muslim, Miriam. The FBI, the CIA and Saudi hit men are on their tail in one of the largest manhunts in California's history. The plot keeps you guessing to the last page -- anyone who says they figured out how Seth and Miriam would get out of thier impossible predicatment before the end is either lying or, like Seth, can see into the future! Along the way we laugh our heads off at some points and cry at others. Gunfights, car chases, high stakes gambling, and a hilarious romance that I found very refreshing.Like I said, I love Dekker's writing style. It's aggressive and refreshing, and I think readers today want that. His descriptions are anything but cliche. For example, "She was nothing more than a helpless maggot here in his presence," is a brilliant if heart wrenching snapshot of an abused woman's deepest feelings. There's plenty to think about in BLINK: Islam and Christianity; God's knowledge of the future; our ability to change the future. But these issues don't ever become burdensome or distracting from the plot. In fact, they become the plot. Bottom line, this was a smashing read. I see what all the talk is about. The critics are right, Dekker is destined to become known as one of the great popular writers of our time. Enjoy.
Copyright © 2022 Thriftbooks.com Terms of Use | Privacy Policy | Do Not Sell My Personal Information | Accessibility Statement
ThriftBooks® and the ThriftBooks® logo are registered trademarks of Thrift Books Global, LLC