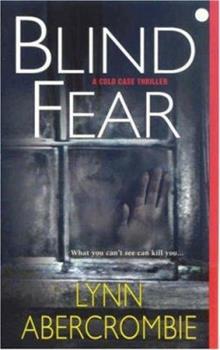 Detective Mechelle Deakes wakes up to discover she's blind. Worse, once she stumbles out of bed, she realizes she's not in her own room. His partner missing, Lt. Hank Gooch looks into her most recent investigation, a case involving a young blind woman who came in to report an old, unsolved murder.

Published by Thriftbooks.com User , 15 years ago
Atlanta Police Detective MeChelle Deakes of the Cold Case Unit wakes up to find her eyelids superglued shut leaving her disoriented and clueless as to why she was abducted. The bewildered cop believes she is also in a soundproof room. At the same time that MeChelle vanished, her new partner Cody Floss goes to her retired former partner Lieutenant Hank Gooch with his concerns about her. Cody explains that Lane Priest came to the precinct to talk to them about who killed and raped her mother because she was hiding under the bed at the time of the tragedy. However, Lane is blind, but insists she can identify the culprit from his voice. Hank and Deakes are given thirteen hours to track down the killer of Lane's mother and find evidence that will convict the murderer in court or MeChelle will die. Hank blackmails the mayor to bring him officially back on duty and immediately afterward he and MeChelle investigate a strange serpentine trail of clues that seemingly lead to nowhere, but hopefully to a killer. Though the murderer and the kidnapper seem impossible to figure out, this treasure hunt investigation is a fun Atlanta joy ride as the police duo struggle to uncover the identity of the rapist killer. The action-packed story line grips the reader from the opening scene in which the heroine cannot open her eyes and never slows down as one clue leads to another. Lynn Abercrombie provides a strong suspense tale that will lead police procedural fans seeking out the Deakes-Gooch previous saga, The Body Box. Harriet Klausner
Trustpilot
Copyright © 2022 Thriftbooks.com Terms of Use | Privacy Policy | Do Not Sell My Personal Information | Accessibility Statement
ThriftBooks® and the ThriftBooks® logo are registered trademarks of Thrift Books Global, LLC