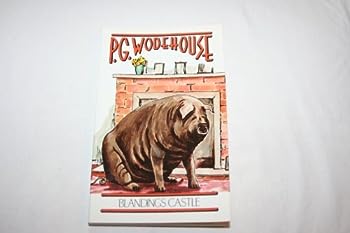 (Part of the Blandings Castle (#3) Series and Mr. Mulliner Series)

Fans of P. G. Wodehouse's comic genius are legion, and their devotion to his masterful command of hilarity borders on obsession. Overlook happily feeds the obsession with four more antic selections... This description may be from another edition of this product.

Not as good as the novels

Published by Thriftbooks.com User , 12 years ago
Perhaps its because I am not a great fan of the short story form, but I did not find these short stories as enticing as the full length Blandings novels. Even so, the fun is there galore and I often laughed out loud at the nonsense. Let me give an example of the kind of desciptions that makes Wodehouse a genius. Lor Emsworth looking out his telescope takes interest in a cow but: "Presently, the cow's audience-appeal began to wane. It was a fine cow, as cows go, but, like so many cows, it lacked sustained dramatic interest". Curiously I though Freddie Threepwood began to sound more and more like Bertie Wooster in these short stories than I had noticed in the novels. I did not really get into the Mulliner stories but perhaps this is because I am single mindedly focusing on Blandings at the minute.

Published by Thriftbooks.com User , 18 years ago
Blandings Castle is an unexpected mix of short stories. After P.G. Wodehouse began to weave his novels about Clarence, Ninth Earl of Emsworth, and his improbable family and friends into a series of hilarious stories, he realized that he needed to fill in a gap. He warns that the first six stories in this collection constitute "the short snorts in between the solid orgies." Specifically, these stories tell us about happenings between Leave It to Psmith and Summer Lightning. You find out more about why Clarence doesn't like to have his son, the Honorable Freddie around. You also learn about how the Empress of Blandings won her first Fat Pigs competition. The Custody of the Pumpkin shows Clarence as a plant-focused competitor before he became a pig-focused one. Mr. Wodehouse also lets us know how Freddie came to marry his wealthy wife and join the dog biscuit business in the States. Some of these stories have plots that could have been turned into novels, which makes the short stories all the better. The most delicious of the stories is a sweet tale of Clarence taking it upon himself to do the right thing in Lord Emsworth and the Girl Friend. The seventh tale is a typical Wodehouse country hullabaloo as Bobbie Wickham manipulates all involved to her advantage in dispatching an unwelcome suitor . . . playing the role for herself the Jeeves and Gally usually play in resolving romantic mishaps. It's clever and ever so liberated. In the last five stories, P.G. Wodehouse unleashes his dissatisfaction with the Hollywood studios into acid satires of moguls and their foibles. For those who know the Hollywood of those days, these tales are almost biographical. Like the Canterbury Tales, there's a delightful element of exaggeration that makes the humor ever so much more tangy. If you dislike phonies, incompetents and those who are out for only themselves, you'll love these stories. If you don't like biting satire, skip these stories. You'll like the earlier seven.

Emsworth Stories Are a Stitch; The Mulliners Are Missable

Published by Thriftbooks.com User , 21 years ago
The first half of the book, which is devoted to Blandings Castle and Lord Emsworth, is a sheer joy to read (5 stars!). The final chapter of the first half is the oft-anthologized short story "Lord Emsworth and the Girl Friend," an exquisite tale of how the permanently befuddled old man befriends a young lass from London who is summering in the countryside, and together the two of them set the world straight. In fact, that's just what the Emsworth stories are always about: People thrown together, each having his/her own set of priorities, and how they get what they want by practicing "You scratch my back, I scratch yours." Communicating over the din of one another's priorities is a constant source of humor, the unexpected combination of actions and outcomes is another, and the whole reveals Wodehouse's virtuosic gift for storytelling. The Emsworth stories are hard to beat.Not so the Mulliner stories that make up the second half of the book (3 stars). Here we have a set of stories with improbable plots about Hollywood in the early talkies days. They rely too much on myths about tons of money floating around Hollywod and the incompetent people who wield all this wealth. Though they were probably pretty well received when they first came out, by a naïve public newly fascinated with Hollywood, they are now rather dated and sometimes too silly to be funny. Plus, Wodehouse shares with Shute and Waugh that singular inability of many an English writer to capture and replicate American-ese. Well, they are not horrible stories; simply relatively uninteresting. You can stop with the last Emsworth story in this book and not miss a thing, which is what I recommend.
Trustpilot
Copyright © 2022 Thriftbooks.com Terms of Use | Privacy Policy | Do Not Sell My Personal Information | Cookie Preferences | Accessibility Statement
ThriftBooks® and the ThriftBooks® logo are registered trademarks of Thrift Books Global, LLC