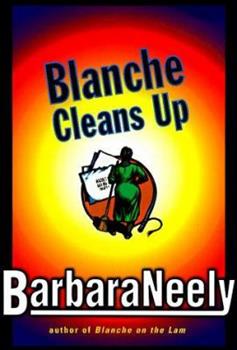 (Book #3 in the Blanche White Series)

Blanche White is a very black, middle-aged woman who cleans white people's houses for a living. Tart-tongued and shrewd, with a keen nose for trouble, she's also a queen-sized snoop - who sees at a glance what people are really up to - especially if it's criminal. It's been three years since she had to grab the kids and scurry out of Farleigh, North Carolina. Now they've all settled into life in the Roxbury section of Boston, and Blanche herself is...

BarbaraNeely has done it again!

Published by Thriftbooks.com User , 19 years ago
I am a 20 year old, African American college student and I work at a public library in Mississippi. While shelving books one day I saw "Blanche Cleans Up." This was rare to me because I very seldom see books by African Americans at this library, so I decided to read this one. I couldn't put it down! This book was awesome! I loved the way the author used politics and racial issues that almost all African Americans can relate to. After reading "Blanche Cleans Up," I read the two previous books in the series ("Blanche on the Lam" and "Blanche Among the Talented Tenth") and needlees to say, the were also great. I look forward to reading "Blanche Passes Go."Keep up the good work Ms. Neely!--Toni

Published by Thriftbooks.com User , 20 years ago
I had read Walter Mosley's mystery novels and was pleased to see African-American characters in a murder-mystery - a genre that seems to be sadly under-represented in our community. I enjoyed Mr. Mosley's treatments immensely, but alas, the undercurrent suggested that only men should be involved in the business of solving mysteries. Then just a week ago I was introduced to Blanche White. I'm in love!!!!!!! This is a wonderful introduction to an African-American domestic embroiled in a murder mystery invovling her employer which lends itself to startlingly candid observations on life from this perspective. While I readily admit that the mystery itself tends to sometimes take a back seat to Blanche's astute observations on American life, in time, Ms. Neely will hone her murder-mysteries with Blanche as the ultimate sleuth who ranks right up there with Miss Marple, Hercule Poirot, Sam Spade, and yes, even Dirty Harry! I have already ordered all of the Blanche books because after reading one chapter, I knew one story would hardly satisfy my desire for a female detective like this one. A definite must. I applaud Ms. Neely's efforts, heartily recommend, and look forward to reading the others!

Published by Thriftbooks.com User , 22 years ago
My biggest criticism is that it took so long for Blanche to reappear. She is a wonderful, grounded woman, doing what it takes to give the best for the kids. This book did have a lot of ugly in it, but so do the lives of so many important, "better than thou" people. Please, Ms Neely, don't let so much time go by without another Blanche book. I want to follow her into a lively senior age.

Blanche does it again!

Published by Thriftbooks.com User , 22 years ago
I love Blanche; she's down to earth, has real life problems and a woman trying to raise two children alone in the 90s. Blanche is a hero, a neighbor you would want living next door and superwoman. Who else would have time to raise two children, work, maintain a relationship with her best friend, deal with everyday problems, including other's problems, maintain a good relationship with her neighbors, can find the inside scoop on her employers without causing too much of a stir, and solve murder mysteries - no one but Blanche. This is my second Blanche mystery which I have read & I have thoroughly enjoyed both. Can't wait to read Blanche Among the Talented Tenth. I hope this author continues the Blanche series!

Published by Thriftbooks.com User , 23 years ago
After reading BLANCHE CLEANS UP, I went right back and re-read all of the "Blanches"--BLANCHE ON THE LAM, BLANCHE AND THE TALENTED TENTH, and BLANCHE CLEANS UP. I tried to keep track of all of the things I liked, but I got tired of making notes and folding back the pages. So I'm just going with what I remember.I'm even more in awe now than I was the first time I read the books. Reading them all in a row, back to back, delivers even more of a wallop. The deftness with which Neely wove in the politics of race, class, color and hair, gender, homophobia, patriarchy, marital status, abuse, criminal justice is awesome. It is the same skill with which she incorporated sometimes subtle references to big city life at it's best--the politics of politics. Blanche is confident and opinionated without being preachy. She knows how to punch somebody in the belly without looking like that's what she's doing. Thank God, though, she also knows how to punch 'em in the gut for real when the situation demands it.I love the fact that Neely created a black hard-working woman character with dignity. The fact that she's sexual without being a hootchie momma and has a sense of justice that also allows her to retain enough smarts to run from the cops when she needs to. She's a sista with uncommon sense and balance. Blanche is compassionate without being the least bit interested in cradling her employers' heads upon her breast, though she takes care to earn every penny they pay her by stirring up a whole range of heart-healthy food and straightening up behind them.No smarmy music, no rose-colored glasses, no moist-eyed fantasy about what it means to have children in her life, either. Before she faced up to her obligation to family and her sister's children, Blanche ran away and gave herself time and space to think. Accepting responsibility for her niece and nephew was a matter of choice, not simply one of blood.The way Blanche deals with her own and her niece's issues around class and color is both ! poignant and sure-footed. Without berating the girl or beating her about the head and shoulders for reflecting relentless dominant cultural influences, Blanche bides her time, guiding and helping the child to see the error of her ways and, more importantly, healthy options. As the daughter of a domestic worker, raised by my mom in the projects in the 50s and 60s of the segregated south, and having experienced very early and firsthand the scorn of bourgeois black folk and white folk up and down the economic ladder, I'm ecstatic and in awe that Neely has done something quite revolutionary: She has given us a bright-colors-wearin', eggplant-black, size sixteen sista with a head full of natural hair and a sense of entitlement to match it all. At last, at last.In a literary world where women authors of color still create main characters who look nothing like their African selves; in a music world where pop stars croon to video stars who look nothing like any woman in their family;
Copyright © 2022 Thriftbooks.com Terms of Use | Privacy Policy | Do Not Sell My Personal Information | Accessibility Statement
ThriftBooks® and the ThriftBooks® logo are registered trademarks of Thrift Books Global, LLC