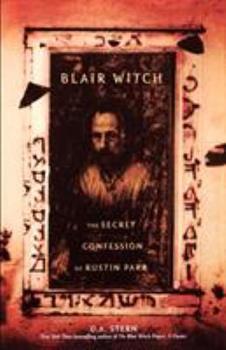 by Dave Stern and D.A. Stern

In May 1941, a hermit named Rustin Parr told police he murdered seven children in Burkittsville, Maryland. The night before he was hanged, he told his priest an entirely different story. This is it. It was the most shocking crime imaginable: the kidnapping and brutal murder of seven innocent children. The particulars of Rustin Parr's crime made the case even more horrifying: the ritual nature of the killings, the strange symbols carved into the children's...

Published by Thriftbooks.com User , 19 years ago
In the blair witch book the authar tryed to make the reader feel as if they were there.the authar tryed to put thing just like people say they hapened and were thought to happen.In the book there were thing compareing the book,movie and what was said to of happened in real life.The parts of the books that i really like was when they whent out in wood to see what they could find and when they sarted to interview poelpe to see wha t they knew and thought.but most of alli thought it was a good book for poeple who are into things like that.

A Fine Addition To The Blair Witch Mythology.

Published by Thriftbooks.com User , 19 years ago
I bought this book thinking it would, indeed, contain the "Secret Confession of Rustin Parr". As another reviewer said, it skirts that issue neatly. Author D.A. Stern does, however, deliver an interesting mystery, and makes it fit with all of the other facts in the Blair Witch "History". The book keeps the prerequisite amount of ambiguity, and as in all other Blair Witch products, there are many ways one could interpret the events depicted. Overall, it's a good read, if a tad quick. Stern manages to deliver some truly creepy moments, and the ending does pack a punch. I'd recommend potential readers check out Stern's Blair Witch Project: A Dossier, and the video The Massacre of the Burkittsville Seven beforehand, though, as both are heavily referenced throughout the book.

Published by Thriftbooks.com User , 20 years ago
This book was one of the best Blair Witch related books I have ever read. It is so interesting up until even the last page. This book is probably the best thing since sliced bread. Wow! What a book! D.A. Stern is a wonderful author and storyteller. Can't wait until the sequel!

Published by Thriftbooks.com User , 21 years ago
Short, sweet, and very chilling, this novel expands nicely upon the Blair Witch backstory presented in the movie, but does so in a way that shouldn't require readers to have actually seen the film. (At least, that's my guess; it's hard to be sure, since I have seen the film.) Author DA Stern demonstrates more than a mere understanding of the Blair Witch fictional mythos with this story; he clearly understands that what made the original movie so creepily effective was its "less is more" approach to horror. This novel uses the same philosophy; what it tells us about former priest Dominic Cazale and accused serial murderer of children Rustin Parr isn't half as scary as what it doesn't tell us. Like the previous Blair Witch spin-offs, the comics collected in the Blair Witch Chronicles book, fans of the movie should find more of what they enjoyed in this novel. Between this book and the comics, I'm pleased enough that I want to give the Blair Witch Files books a try!

Published by Thriftbooks.com User , 21 years ago
This novel, which I assume must be tied into the sequel to "The Blair Witch Project," is a well-crafted piece of horror genre. Given the wretched state of horror fiction in general right now, that's high praise, indeed. "The Secret Confessions" is chopped and channeled, stripped down to the basics of spare prose, straightforward narrative and the final twist in the tale down the back stretch, where everything falls into place with little effort.Rustin Parr is the recluse hung by the State of Maryland in 1941 for the murders of seven children in the basement of his house in a forest near Burkittsville. Parr's final confession is given to a young Roman Catholic priest who has some sins of his own that he carries with him from Burkittsville. Sixty years later, an acquaintance of the priest, who has long since renounced his holy orders, struggles to find out why the old man burned his house down, killing his beloved wife in the process and leaving him comatose with third-degree burns.You won't need to be a Blair Witch fan to enjoy this novel, which can be read in one sitting. Stern gives you everything you need to understand what happened in Burkittsville and why the evil there found its way to the home of an elderly couple in Florida. Horror fiction rises or falls on a few key points. One involves whether the supernatural action arises from simple human frailty, a dark force entering through a chink in the armor of an otherwise decent, normal person. Good horror hews close to reality -- at all points, we must be able to empathize with the human targets of evil, which requires them to act and react in ways that we ourselves would react if faced with the same situation.D.A. Stern accomplishes both of these goals here. He also doesn't condescend to the reader with a neatly-wrapped ending. You'll be able to figure out what happened in Rustin Parr's basement, but only if you pay attention, catch the clues Stern provides and put them together on your own.For a book no doubt designed simply to keep public interest alive in a popular horror movie, D.A. Stern has gone above and beyond the call of duty. "The Secret Confessions," with its echoes of Nathaniel Hawthorne, is one of the best piece of horror fiction you will run across this year.
Trustpilot
Copyright © 2022 Thriftbooks.com Terms of Use | Privacy Policy | Do Not Sell My Personal Information | Accessibility Statement
ThriftBooks® and the ThriftBooks® logo are registered trademarks of Thrift Books Global, LLC