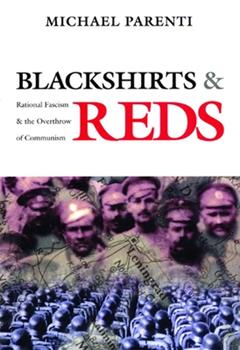 Blackshirts and Reds: Rational Fascism and the Overthrow of Communism

A bold and entertaining exploration of the epic struggles of yesterday and today. Blackshirts & Reds explores some of the big issues of our time: fascism, capitalism, communism, revolution, democracy, and ecology. These terms are often bandied about, but seldom explored in the original and exciting way that has become Michael Parenti's trademark. Parenti shows how "rational fascism" renders service to capitalism, how corporate power undermines democracy,...

Excellent book, my first by Parenti

Published by Comrade Xyoh , 1 year ago
I've heard much about Parenti and his voice before reading this book and I was not disappointed. Parenti is not exactly a "fast" read, but it's more conversational and accessible than most history books. Everything I was reading felt like events I had already known, but Parenti takes history and polishes in such a way that you know longer have to think about these things as rumor or an alternate/passing thought about the USSR (because almost everything out there is constant unapologetic USSR bashing). It's objective in its own way, yet passionate. Can't wait to read more by this author.

Published by Garrett Camfferman , 1 year ago
Succinct and accessible account of how industrialists side with fascists when their power is threatened. Timely work.

Published by Thriftbooks.com User , 17 years ago
An accessible critical analysis of the reactionary historical role of fascism by one of the most advanced and consistent scholars today.One wishes, though, that Parenti would have given more details on the early, corporatist designs of fascism -- designs which appear disturbingly similar to what institutional far-right planners and politicians in the U.S. are attempting to implement in the present context by whatever pretext they can to impose their more deceitful and technologically distracting but no less oppressive agenda on the entire world.Nevertheless, Blackshirts and Reds is an excellent overall criticism of fascism because it serves at least as importantly as a principled and unapologetic primer on the continuing practical relevance of Marxism to social change, the author making concisely clear why the honest study of Communist theory and practice -- undistorted by its dedicated enemies -- is no idle exercise in nostalgia, but a necessary prerequisite to really understand and transform present-day society.Parenti also includes, here and there, a welcome critique of Noam Chomsky, whose political shortcomings and acknowledged ignorance of and indifference to fundamental Marxism and its actual development may not be readily apparent to the casual observer unfamiliar with his particular anarchistic anticommunist bias, notwithstanding his progressive stand on certain issues whatever his way of reasoning.

Does not knee-jerk bash former USSR

Published by Thriftbooks.com User , 19 years ago
Michael Parenti is the best writer in the world covering international affairs, and also American domestic issues as well. In "Blackshirts and Reds" he again demonstrates his willingness to go against the orthodoxy of both the right, center and unfortunately left, by revealing facts and truths the powers that be just don't want to be bothered with; and many honorable leftists are afraid to utter for the fear of being branded as Stalinist sympathizers. His description of the current social and economic conditions for the average Eastern European and citizens of the former USSR is worth the price of the book alone. The obvious conclusion is that they'd be much better off under the old egalitarian system than their current lives of penury under the new capitalist system that Yeltsin, the nomenclatura and the United States were and are so eager to throw upon them. Propping up brutal undemocratic regimes (Chile, El Salvador, Indonesia, Guatamala, etc.) that are conducive to capitalist penetration and exploitation while obliterating democratically elected governments (Nicaragua, The Congo, Allende's Chile, Spain, Vietnam, East Timor, etc.) that want to follow a more egalitarian non-capitalist path are some of the things the capitalist powers have done during the last millenia. Of course they couch their criminal conduct (often carried out by the CIA, U.S. State Department and segments of the U.S. military, some times using proxies) in euphemisms such as "free markets" and "free elections." Parenti delves into much of this sordid history in this fine book. He eloquently describes how and why the former USSR collapsed and he doesn't feel the need to constantly make casual asides about how evil Stalin supposedly was. He mentions how the Soviet Union's collapse had a lot more to do with the constant capitalist propaganda and glittery materialistic imagery of the West rather than with the failure of Communism itself. Today, the average Russian citizen would be much better off economically and socially (they wouldn't have to fend for their livelihoods against organized mafiosi or suffer through exploitative jobs or prostitute themselves) if they were still in a socialist state rather than living in the current capitalist nightmare that was rammed down their throats in a shock treatment manner. Parenti touches on all of this. He also delivers an array of facts and figures which demonstrate that the Gulag and Stalin were no where near the hellishness that they're often labeled as being by pro-West capitalist sympathizers and their propaganda machine. Lastly, his analysis of the manner in which the East Germans dealt with former sadistic Nazi criminals and fascist sociopaths (imprisoning them and holding them accountable for their execrable and hateful actions) as opposed to the coddling West Germany bestowed on them is some of the most fascinating and intellectually enlightening passages I've read in years. I cannot recommend this book enough and

Published by Thriftbooks.com User , 21 years ago
This is an unsparing, uncompromising defense of Marxism-Leninism from a respected scholar of political science. No politically engaged person should fail to read Parenti's book. It will be outrageous to some, inspirational to others, but thought provoking to all. The author takes on critics from the right and the left in a highly accessible writing style. His ideas are presented clearly and forcefully, without technical or theoretical jargon. Among his politically-charged topics: communism and fascism, revolution, delusions within the left, the collapse of the soviet bloc, and perhaps most important, the ongoing necessity of class analysis in a postmodern world. Parenti's book serves as a clear statement and reassessment of where Marxism-Leninism stands in a world that has seemingly rejected those ideas but whose triumphal market economies move increasingly in a Marxian direction. "Blackshirts and Reds" fills a huge gap for the general reader and is not to be missed.

Published by Thriftbooks.com User , 21 years ago
Parenti shares his most current thoughts on fascism, socialism, communism and capitalism in an unique and personal ways, without apologies. Although it's true that the book rehases running dispute between leninism and anarchism, it does carry a sense of intellectual honesty in defending and explaning his political convictions -- especially when most leftists find it now more opportune to be seen as a liberal socialist, even if their personal histories don't confirm such wish.Parenti has always been out there defending revolutions and revolutionaries, although one can question his personal emphasis on the russian revolution and east european countries over other third world liberations. At the same time, he is quick to point out genunine concerns with the bureaucratic natures of soviet states and their ineffieciencies. Although this is similar to other liberal socialists, he distingishes himself from the pack by showing a truer appreciation and understanding to the difficulties of revolutions within the international domination of us imperialism as best exemplified by the sandanista revolution. The book devotes a whole chapter on "communist wonderland" on this subject. After reading this chapter one cannot honestly call him a communist apologist. Ironically when the current political tide encourages more leftist intellectuals to be more critical of communist revolutions, Parenti refuses the opportunity to step in with the pack. There is a sense of sincerity in his uncompromising stance as one of the last remaining soldiers down in the tranches of fighting capitalism and imperialism.

Published by Thriftbooks.com User , 23 years ago
Parenti does it again! In this book he traces brilliantly the appeal and development of the fascist movement, explaining how fascist leaders use irrational symbols to manipulate people who have very rational concerns about their diminished living standards. Parenti is one of the very few analysts who actually assesses the real economic impact of fascist governance; he proves that fascism lead to ever-greater brutalization of the workers, and a gross redistribution of wealth upward to the system's corporate benefactors. Parenti explores closely the actual record of Communist leadership; he provides a nuanced analysis that both praises the Communists for their achievements in the matter of social equity , and criticizes these states for their oppression of their people. Nonetheless, Parenti proves that even tyrants like Stalin were not quite as bad as their fascist counterparts, for every Communist leader had to constantly resist the imperialist pressures of the capitalist west. Parenti also brilliantly derides those so-called liberals who ignore the issue of class today. He points out that true progressives should be more concerned with the living conditions of working people than with some sterile, lofty, and ulimately meaningless debate over cultural issues. All in all, a very solid book; I didn't agree with everything in it, but I did agree with most of it. Parenti writes well, persuasively, and coherently. His writing comes as a much needed rejoinder to the rightist and centrist blather which currently dominates TV punditry, newspaper editorials, the mainstream news magazines, et al.
Copyright © 2020 Thriftbooks.com Terms of Use | Privacy Policy | Do Not Sell My Personal Information | Accessibility Statement
ThriftBooks® and the ThriftBooks® logo are registered trademarks of Thrift Books Global, LLC