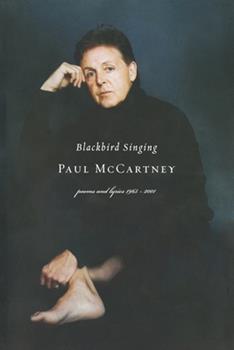 The hardcover publication of "Blackbird Singing," the first collection of Paul McCartney's poems and lyrics, was an international cultural event celebrated in concert halls, at literary festivals, and in newspapers and magazines throughout the world. "While McCartney is of a completely different cast than Bob Dylan, his appeal may be even greater than that of the latter great poet-songwriter," wrote "Publishers Weekly; The Guardian" hailed McCartney's...

McCartney is a musician, but his words are pure poetry...

Published by Thriftbooks.com User , 18 years ago
This book looks like very little on the surface, especially if you know by heart (or own) the lyrics to many Beatles/McCartney songs. But this anthology is more than just lyrics, because the short selection of lyrics that were edited into this are ones that look and sound like poems. Actually there are many new (and many ones I had never read) poems in here, and most are not even songs ("Mother Nature's Son", "Here, There, and Everywhere", "For No One", and "Helter Skelter" aren't to be found in this). Therefore, it is a moving collection of poignant, amusing, and insightful poetry by a master lyricist with feeling. Although Lennon may have written the most notorious Beatles compositions, McCartney proves that he was the Beatle with the gift of both words and emotion.

Published by Thriftbooks.com User , 19 years ago
Sir Paul continues to fascinate by his ethereally intrinsic usage of everyday English language in the attainment of exploring the emotions and varied experiences of all human beings. I only wish he had published this incredible insight many moons ago. Paul was obviously not at the place in his life where he was so radiantly willing to share his profoundly personal develing of his particular valleys and mountains. I felt intrigued and at moments, uncomfortable with being so wonderfully privy to such intimate observations and experiences, but I have been enlightened, inspired, and changed just the same. I personally chose Paul's volume to grace my Library's shelf (both at the library inwhich I oversee and my own personal library in my home) and am delighted to have it available whenever I am in need of inspiration, both personally and professionally. Paul may have intended this as a work for his own personal artistic endeavour, but I suspect "Blackbird Singing" has become a spiritual tome for numerous other poets and lyricists alike (both of the "closet" and "out-of-the-closet" variety, of which I am the former!). I graciously wish to extend a "thank you" to you Paul for your being an exceedingly courageous soul to have scribed "Blackbird Singing" for posterity's sake. (I admire and envy what you and Linda shared for those three decades. Inspiration, indeed.)

Painting a room in a colorful way...

Published by Thriftbooks.com User , 20 years ago
Paul McCartney has been my favorite musician for a long time now. His music has filled moments of my life with joy, anticipation, and wonder--al of the good things that we live for. I've had his tunes stuck in my head as I've walked through spring fields after it's been winter for a seemingly endless time. I've listened to his albums while going for drives on sunny mornings and felt the warm sunlight refracted through the windshield on my face.Paul's music is also good for a rainy day when you can smell the wet dirt, or a foggy morning when your imagination starts to wander. Paul's music is wonderful. I always probably would have said that it's his sense of melody and chord structure that I really like.But reading Paul's lyrics naked here, without the clothing of the music, I realize that I also really love the playfulness of the words themselves. This is a great book if you're a Beatles fan or a McCartney fan, because it'll make you come to the songs in a new way. You can see how inventive McCartney really is, not just musically, but also lyrically.He paints with his words in much the same way that he paints with his music: in a colorful way, and when his mind is wandering, there he will go...Great fun for any fan of music or poetry. If you like this book, you should also check out McCartney's recent book of his paintings. That one's really good, too.

With or without the music, real poetry

Published by Thriftbooks.com User , 20 years ago
My take on this book of poems is simple: he's been writing poetry since Yesterday ("Oh, yesterday came suddenly"), so it is not at all surprising that someone should have drawn his attention to this fact, and convinced him to release his first collection of poems. Many of his song lyrics are full of poetry, and on the occasion of the death of his friend Ivan Vaughn (who took him to the church fete at Woolton in 1957 where he met John Lennon) he found himself writing a poem with no thought of attaching a melody. More poems followed, as well as more lyrics. Poetry does not occur in large dollops usually, but in a line, a phrase, a couplet, sometimes a whole sonnet. McCartney's song lyrics are full of lines, phrases, couplets, and whole songs which are real poetry: compressed, fresh language that changes our perceptions, catches our hearts, imbeds itself in our brains before we know what's happened, just as his melodies do. His poetry has the same qualities that his lyrics do: an irrepressible sense of play and of wonderment; an enormous warmth that never gets sloppy, wit, curiosity, and great economy of means. He covers a wide range of experience in this volume: from the depths of grief to the pleasures of being married to your best friend to little jokes about Tchaikovsky. He will alternately move you, amuse you, and make you think, as he always has.

Published by Thriftbooks.com User , 20 years ago
Paul McCartney writes the best melodies since Schubert. But I've always liked his words. There are striking little images everywhere--"like being caught in a tape loop in a big dance hall," "long live all of us crazy soldiers who were born under calico skies," "the rain exploded with a mighty crash as we fell into the sun," etc., etc. I'm usually so caught up in the music I don't pay attention to the words. It's nice to have them in front of so I can catch the clever and unique twists McCartney gives to words. He's sort of a combination of Blake, Lewis Carroll, and e. e. cummings. But even after I read his magical, mysterious words, I want to go put on one of his albums so I can hear the music that goes along with them.
Copyright © 2020 Thriftbooks.com Terms of Use | Privacy Policy | Do Not Sell My Personal Information | Accessibility Statement
ThriftBooks® and the ThriftBooks® logo are registered trademarks of Thrift Books Global, LLC