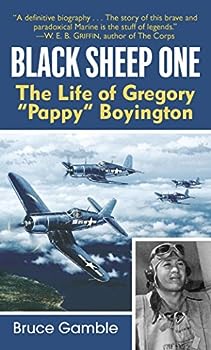 Black Sheep One: The Life of Gregory "Pappy" Boyington

Black Sheep One is the first biography of legendary warrior and World War II hero Gregory Boyington. In 1936, Boyington became an aviation cadet and earned the "wings of gold" of a naval aviator.... This description may be from another edition of this product.

A truly epic study of a tragic hero

Published by Thriftbooks.com User , 19 years ago
Bruce Gamble deserves great credit for dealing with a mythic and controversial hero who laid claim to be the leading USMC ace in World War II and won the highest award in the country. His introduction to combat and first claims came from his stint as a member of the famed American Volunteer Group (AVG) known to most as the "Flying Tigers". He was summarily dismissed from the AVG for his abuse of alcohol and disrepect for authority (both of had which led him to abandon his USMC flying career to join the AVG along with chronic financial woes). World War II offered him an opportunity for another chance to fly and serve his country that he might not have gotten in peacetime. Arriving in the Solomon Islands, he continued to abuse alcohol and raise a ruckus, but he eventually got his own squadron, the "Black Sheep" which he led to great success against the Japanese. There is no doubt that he was a gifted aviator despite flying under the influence or at least hung over. Some of the aerial victory claims may be disputed (certainly his AVG claims are), but these type claims have been controversial by antagonists in all conflicts since aerial combat began. Gamble deals with all of this in great detail particularly the virtual clinical examination of Boyington's alcoholism so many years after the event. Gamble's research could have yielded a good book, among the best written, on the Black Sheep and Boyington, but he superbly wrote the Black Sheep story as its own subject and then dealt with Boyington as a biography andproduced a truly unique study of a tragic hero, flawed on several levels, but just as laudable on others. The author deserves great credit for deep research, sensitive and accurate writing and weaving a very readable treatment of Boyington, truly the best on any shelf.

Boyington...a tactician way ahead of his time..

Published by Thriftbooks.com User , 20 years ago
Being a military history buff and a Boyington fan, this book was a "must read" for me. This book shows the human side of Boyington. While Boyington may have seemed a larger-than-life war hero (which in many ways he was) he was an ordinary man with his own demons. His worst enemy was himself.. and his addiction to alcohol...an addiction he never totally defeated. One wonders what Boyington may have accomplished had he not have been an alcoholic. His alcohalism cost him a lot.. several divorces, alienation from his family, and quite possibly a polital career. Boyington was way ahead of his time in the area of air combat tactics. Sometimes his propensity to deviate from regulation got him into trouble with superiors, but no one can deny the combat victories the Blacksheep attained under his leadership. No Marine Squadron has ever attained the success VMF 214 had in those two combat tours then or since. His military combat record speaks for itself. Boyington's tactics were unconventional, in the sense he never employed the same tactics for long. He was constantly evolving, a theory that never allowed the Japanese to catch on to his tactics. This is an excellent book to learn about Boyington the man, how he thought, and what made him tick. In spite of his faults, he will forever be remembered as the greatest Marine Ace of all time. This book does him justice. I highly recommend it.

This may be the only biography I have ever finished.

Published by Thriftbooks.com User , 20 years ago
I hate biographies with their authoritarian tones, time lines, dates and obscure facts, and get bored before finishing them. I do, however, prefer to be historically accurate rather than politically correct, so when my children started watching Black Sheep Squadron on the History Channel, I figured I had better learn more about Greg Boyington.Having seen Mr. Gamble's commentaries during breaks from the show, I expected the typical pompous biography with a military cadence to match the author and subject. When I began to read it, I was floored: I couldn't put it down and I finished it. Mr. Gamble's prose was lyrical, and his treatment of Boyington was fair and meticulously researched.Heroes aren't necessarily bums, and biographies aren't necessarily dull, boring and omnipresent.

The Boyington Legend - Warts and All

Published by Thriftbooks.com User , 21 years ago
In this bio. of Greg 'Pappy' Boyington, the author adds so much to previous books. Through painstaking research, he covers aspects of Boyington's youth, early USMC career, and later life that I hadn't read before. Certainly not in Boyington's self-serving (but fascinating & enjoyable) Baa Baa Black Sheep, not in Gamble's previous book on the Black Sheep squadron.I found persuasive the author's analysis of Boyington claims for aerial credits. (Wonder if the USMC would? I doubt it, debunking Medal of Honor winners probably isn't real high on the Corps' list of priorities.)But this book equally conveys Boyington's combat leadership, and the reverence his men felt for him

magnificent biography of a troublesome hero

Published by Thriftbooks.com User , 21 years ago
Pappy Boyington is one of the most memorable pilots of World War II. But as he famously said: "Show me a hero, and I'll show you a bum." He did the best to prove his own maxim.As a member of the Flying Tigers of Burma and China, he was credited with two Japanese aircraft shot down, but left early and in such disfavor that he got a "dishonorable discharge" from its commander, Claire Chennault. He then re-joined the Marines and proceeded to build an unorthodox fighter squadron--the Black Sheep--with many similarities to the Tigers, with himself playing the role of Chennault. Shot down, he was awarded the Medal of Honor while serving time in two of Japan's most notorious prisons. He emerged alive at the end of the war, claiming to have accounted for enough Japanese planes on his final day to make him the leading USMC ace of World War II.It's a fascinating story, but Bruce Gamble goes beyond the war record to show us the boy growing up in a troubled family and following his seemingly doomed path to alcoholism and brawling and a troubled marriage of his own. Boyington's checkered career postwar is equally compelling. You feel sorry for him, angry at him, and in awe of him as one of the great shooters of all time.This is a brilliant book and an important one, and it belongs on the shelf of anyone with an interest in World War II aviation.
Trustpilot
Copyright © 2022 Thriftbooks.com Terms of Use | Privacy Policy | Do Not Sell My Personal Information | Accessibility Statement
ThriftBooks® and the ThriftBooks® logo are registered trademarks of Thrift Books Global, LLC