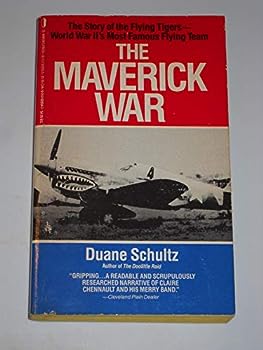 The Maverick War: Chennault and the Flying Tigers

(Book #1 in the Greyhaven Series)

By the light of a gilded moon, a mysterious black rainbow framed the huddled towers of Grayhaven Manor, a vision of ominous beauty that seemed to warn Megan O'Neill of a darkness within. As the estate's new governess, her apprehensions were banished by the welcome of the Mandeville family. But Megan's growing obsession for her handsome employer blinds her to the terrifying truth of Grayhaven.

Published by Thriftbooks.com User , 14 years ago
No real "happy" ending, no truly good and wholesome characters, the sense of despair building towards that ending... I'm so surprised to say I really enjoyed this book! It was different -- and dark -- enough from Ms. Michael's other novels to keep me riveted from shock alone. There were so many layers to the novel, it bears reading again. Like stories assigned for those pesky college lit classes, many critical plot points are alluded to, and it's up to the reader to determine their significance. The seemingly innocuous comment about Edmund's son looking just like his grandfather (possibly Sam's grandfater/father...?), the meaning of Edmund's comments about Jane "spoiling everything" when substituting herself in Megan's place for the ill-fated hunt, and many more have caused me to think about the book long after it -- and several since -- was finished.

ONE OF THE BEST ON THE FLYING TIGERS

Published by Thriftbooks.com User , 16 years ago
The story of Claire Chennault and the remarkable Flying Tigers is one of the most intriguing tales of modern war. It reads like a fictional movie script, filled with drama and adventure such as most only dream of. One thing that is seldom mentioned in popular history is that Roosevelt supported a scheme to attack Japan in 1940 using American planes and American crews who were to fly as members of the Chinese Air Force. The resources and crews were unavailable for this effort which then was reduced to become the 100 fighters supplied to China with American pilots, staff, medical, and ground crew. It was this group that became the Flying Tigers. Their memory is greatly respected in China to this day. I wish to mention here also that some remarkable women accompanied and were part of this unit and they showed amazing determination and courage. The sultry Olga Greenlaw was the group's diarist. Doreen Davis, Sharon McHenry, Emma Petach and Eloise Whitwer and others were amazing people with great stories in their own right. Many of, but not all, of the Flying Tigers, as shown here, were a wild bunch of hard drinkers and a constant problem for Chennault. They fought savagely and earned their place in history. No one else but him could have pulled this group together. They were disbanded in 1942 and the 14th Air Force under the command of Chennault took their place. Chennault was intensely disliked by Generals Stilwell (who was useless), Arnold and Marshall. Only a few weeks before the end of the war, after his mentor Roosevelt's death, Chennault, one of the greatest Aviators and air tacticians in history, was forced to resign in the most shameful manner and denied the fruits of victory. After the war Chennault returned to China to serve brilliantly under Chaing Kai-Shek. I recommend this book highly.

A stormy night, a dark rainbow

Published by Thriftbooks.com User , 18 years ago
Romance, suspense, an ancient English manor house, a beautiful young heroine with two very different men in her life....how could a novel fail with these ingredients? Barbara Michaels spins a bodice-ripper tale that is far above the ordinary. Using her fine ear for dialogue, her quick and accurate characterizations, and solid plotting, she quickly engages the reader's interest and empathy. In Michaels' trademark "end beyond the ending", further events spill forward just as you think you've reached the conclusion of the tale. Highly recommended.

A Gothic Classic, Michaels at her best!

Published by Thriftbooks.com User , 19 years ago
An unforgettable love story. The young girl who marries the master of the castle only to find out "all that glitters is not always gold". Great suspense, difficult to put down! A Michaels classic!

Not your run-of-the-mill gothic romance

Published by Thriftbooks.com User , 20 years ago
You'd think that, having written 60 or so books in more-or-less the same genre, Ms Michaels / Peters would not have a spark of originality left in her. But here she takes the features of a typical gothic romance and skillfully turns everything on its head. The man and woman set up as the hero and heroine are not in fact the hero and the heroine. The prize is not romantic happy-ever-after, but rather something apparently more pragmatic (a neat solution to a problem?), and perhaps even more idealistic than romance (social justice?). And this delivered in Ms Michaels' usual competent and readable writing style. Is there such a thing as a sensible, mature gothic romance? If so, here it is.
Copyright © 2020 Thriftbooks.com Terms of Use | Privacy Policy | Do Not Sell My Personal Information | Accessibility Statement
ThriftBooks® and the ThriftBooks® logo are registered trademarks of Thrift Books Global, LLC