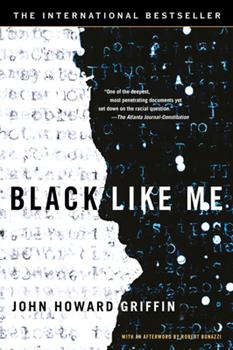 THE HISTORY-MAKING CLASSIC ABOUT CROSSING THE COLOR LINE IN AMERICA'S SEGREGATED SOUTH "One of the deepest, most penetrating documents yet set down on the racial question."-- Atlanta Journal & Constitution In the Deep South of the 1950's, a color line was etched in blood across Louisiana, Mississippi, Alabama, and Georgia. Journalist John Howard Griffin decided to cross that line. Using medication that darkened his skin to deep brown, he exchanged...

Published by ElemTeacher , 2 years ago
Easy to read with its journal style. Brings great insights.

To walk in another man's mocassins

Published by Thriftbooks.com User , 18 years ago
It is said one cannot understand or empathize with someone else unless "you walk a mile in their mocassins." John Howard Griffin did just that, darkened his skin and took a walk into the Deep South to see how it would feel to be a member of a despised minority during 1959, the height of the Jim Crow years, when water fountains and rest rooms were separate for the races, when a black man or woman couldn't eat in a restaurant or get a hotel room. (It is said Bessie Smith, the great blues singer, died after a car accident because she couldn't be treated at a nearby hospital, for whites only.)The book is of course dated, but it is unique in that it is a viewpoint that is undeniably credible. Here is a white guy, saying: "It happened to me, just because my skin was dark. Believe it." He suffers the indignity of finding everyday tasks that become almost insurmountable--to find a restroom, a bus seat, a park bench, someplace to eat, to be left alone with out fear of harrassment. And it's this harrassment and outright fear that changes Griffin to the point he had to finally abandon his project. He was changed by it. The question I have is what would someone who chose Griffin's experiment find today? While Jim Crow is gone, the cultures still have a gulf between them. And since today, you won't see the "whites only" sign on drinking fountains that I saw as a child traveling in the Deep South, you should be sure to read this to get perspective on our history and culture. This is a brave book.

An unforgettable look at the worst of the Deep South

Published by Thriftbooks.com User , 22 years ago
As I write this review I have my old copy of Black Like Me in front of me. It's a Panther paperback, printed in 1964, bought by my parents, and found by my sister and myself on their shelves a few years later. I can still remember the shock when I read this, at the age of perhaps eleven, at realizing just how inhuman people could be because of something as seemingly trivial as skin colour.Griffin spent a little over a month--parts of November and December, 1959--with his skin artificially darkened by medication. In that time he traveled through Louisiana, Mississippi, Alabama and Georgia, finding out at first hand what it is like to be treated as a second-class citizen--or, as he says, as a tenth-class citizen. Everyone now know the story of the big injustices, the lynchings, the civil rights cases, and for most people those are now just another page in the history text book. Griffin's experiences take the daily evils of racism and thrust them in your face, just as they were thrust in his--the rudeness of the clerk when he tried to pay for a train ticket with a big bill; the difficulty he had in finding someone who would cash a traveler's check for a Negro; the bus-driver who wouldn't let any blacks off the bus to use the restrooms; the white man who followed him at night and threatened to mug him.I've heard people worry that this is the white experience of racism: that whites can read this book and feel good because a white person felt the pain too. I'm white, so I don't know that I can judge that argument completely impartially, but I can tell you that this book profoundly shaped my views on racism, and that any book that can do what this book did for me is a book that is good to have around.One more thing. I've said a lot about how powerful, and how influential the book is. I should add that it is also a gripping story. Though Griffin only spends a month with dark skin, by the time you finish the book it feels like an eternity.A wonderful read, and a truly amazing story.

Published by Thriftbooks.com User , 25 years ago
There are only a few books that have really given me a deeper understanding into the issues of the world around us. This book is one of them. John Howard Griffin penetrates into a world that seems almost beyond belief and yet is undeniably and startlingly real. Realizations await on every page to show that the generally sheltered cultural perspective of the typical white (like myself) could not conceive the situation which confronted blacks in the south every day just a very few years ago -- as experienced by a white man who changed his skin color and dealt with the consequences. The book is made even better by a series of stories about his experiences after returning to the world of caucausions and going on the lecture circuit about the plight of blacks in the south. He demonstrates the rationalization and close mindedness that characterizes even those who consider themselves "good people". This book would probably be too much to accept if not for the authors remarkably unassuming and explanatory style. Rarely has such a sore subject been confronted so directly and yet so plainly. Highly recommended. I keep having to buy new copies because people will read a few pages and want a copy.
Trustpilot
Copyright © 2022 Thriftbooks.com Terms of Use | Privacy Policy | Do Not Sell or Share My Personal Information | Accessibility Statement
ThriftBooks® and the ThriftBooks® logo are registered trademarks of Thrift Books Global, LLC