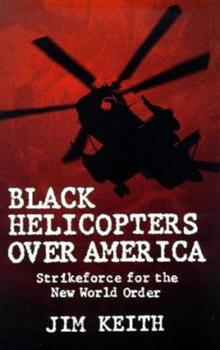 Black Helicopters over America: Strikeforce for the New World Order

The original book on the black helicopter phenomenon! What is the meaning of Black Choppers! Movement of Troops! Creation of Detention Centers! National Police Force! The Surrender of U.S. Military... This description may be from another edition of this product.

3 items I can verifiy are true

Published by Thriftbooks.com User , 14 years ago
I read this book after purchasing it at a local gunshow in Kansas City Missouri back in 2003. Since I was living in the area for 18+ years and serving in the Army I was familiar with some of the information that was in the book. On one occasion I did see one of these black helicopters flying east from Kansas City MO along I-70 and I followed it to Whiteman AFB in Knob Noster MO. There are a couple of other entries in the book that talk about detention centers in the area and a storage depot in Atchison KS located along the Missouri River. These two are true.

Published by Thriftbooks.com User , 22 years ago
To those of you unfamiliar with Jim Keith's books, you will appreciate Keith's incredible facility to see beyond the fact-ridden, and extrapolate hidden agendas within government enterprises, as in this book, you will note that he opens with review of jounralist Ed Sander's insights into the meaning of CATTLE MUTILATIONS within the context of first appearing very close to military base in Colorado, and why Keith dared to mention on his guest appearance on ART BELL talk-show the relevance of many cattle mutilations having been diagnosed with CLOSTRIDIA, and what that microbe means for BIOLOGICALS productions, as noted by famed journalist, RN Joyce Riley of American Gulf War Veteran's Association... and why this news is being suppressed, and why JIM KEITH's books have so much merit in understanding GLOBALISM and all sorts of "hidden agendas". Read ALL of Jim Keith's books, before you think this is all madness and sheer nonsense! JIM KEITH has lots more to say about the "New Order" and the devious machinations ensuing from very greedy people. Keith has tried to expose the nefarious nature of many psy-ops--READ ON!

Ahead of its time, a future classic

Published by Thriftbooks.com User , 22 years ago
Jim Keith (1949-1999) died suddenly on Sept 7, 1999, as the government was finally revealing it covered up some of the truths of Waco. Most people don't get Keith's writings, that as a reporter he reported, with humor and insights, with tongue-in-cheek intellect. In the future when the mystery of the helicopters, be theyblack, green, or dark blue is revealed, interested historians will refer to this book. Not for the wild theories of UN stormtroopers or other items Keith merely was repeating, but for the fact that things were seen, unknown and unidentified, which may have had a link to missions not yet fully understood. Was there special helicopters over Waco? Yes, of course there was. This book gives a sense that things are happening which may be merely a part of a plan still unexplained today. Unfortunately, Keith will not be around to see his works appreciated within this new enlightenment. That's too bad. And sad.But his books remain, for all to mine for the little gems. Don't be dismayed by the theories. Look at the data.

Published by Thriftbooks.com User , 23 years ago
MOST people rate books lower when they are hard to belive, but what is hard to believe about the truth when people out there actually are in conspiracy and also have other underground and deceitful agendas..look at the X-files..trust me, that show is not far from the truth and that is why I am glad to be a Christian.

Published by Thriftbooks.com User , 25 years ago
Jimmy is in top form here. Well researched and informative. Very fact-based though Jim does offer some speculation on the meaning of UN troop training manuevers on US soil--an unconstitional act--as well as the presense of Soviet war machines in the US. Also interesting take on cattle mutilations for you UFO buffs out there. Reminds me of an account I read recently in which a Budd Hopkins patient--warning! beware of Budd Hopkins--who recalls being abducted by a UFO though in one hypnotic regression the patient remembered a helicopter just before the UFO experience. Was the patient actually abducted by a helicopter as part of the governments mind control experiements--see Alex Constantine's book Psychic Dictatorship in the USA. Aliens and the abduction experience are false memories implanted by the government to cover their own tracks--seeing as how they cannot erase a memory as well as they can confuse a victim with a false memory. Jim Keith is at the top of the conspiracy field. Highly recommended reading. An important piece in the conspiracy puzzle
Trustpilot
Copyright © 2022 Thriftbooks.com Terms of Use | Privacy Policy | Do Not Sell My Personal Information | Accessibility Statement
ThriftBooks® and the ThriftBooks® logo are registered trademarks of Thrift Books Global, LLC