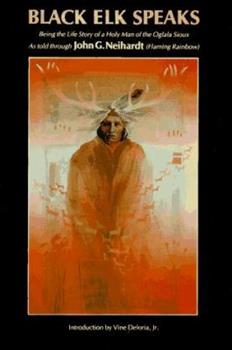 Black Elk Speaks: Being the Life Story of a Holy Man of the Oglala Sioux

The most famous Native American book ever written, Black Elk Speaks is the acclaimed story of Lakota visionary and healer Nicholas Black Elk (18631950) and his people during the momentous, twilight years of the nineteenth century. Black Elk grew up in a time when white settlers were invading the Lakotas' homeland, decimating buffalo herds and threatening to extinguish their way of life. Black Elk and other Lakotas fought back, a dogged resistance...

Book is probably great! It was the condition..

Published by Laura , 2 months ago
I haven't yet read the book & am very excited to! My issue is that I ordered "like new" condition and it came with significant water damage which was unfortunate. I typically have a good experience w/ book conditions so hopefully it was just a fluke. I can still read the text there just is staining and a bend on the lower part :(

Published by Thriftbooks.com User , 15 years ago
Black Elk Speaks is a 1932 autobiography of an Oglala Sioux medicine man as told to John Neihardt. In the summer of 1930, as part of his research into the Native American perspective on the Ghost Dance movement, Neihardt contacted an Oglala holy man named Black Elk, who had been present as a young man at the 1876 Battle of the Little Big Horn and the 1890 Wounded Knee Massacre. As Neihardt tells the story, Black Elk gave him the gift of his life's narrative, including the visions he had had and some of the Oglala rituals he had performed. The two men developed a close friendship. The book Black Elk Speaks, grew from their conversations continuing in the spring of 1931, and is now Neihardt's most familiar work. http://en.wikipedia.org/wiki/Black_Elk_Speaks

Published by Thriftbooks.com User , 15 years ago
As I recall, it was one of those hot, smoggy summer days in LA. We were sitting on a park bench in the shade. The park was one of those anonymous lttle collections of half-watered, half-dead grassy spots that dot the LA sprawl. Present were Manuel, his wife Vera chief of what was left of the Huhumonga tribe (Gabrielino, in Spanish), and several of us white activists. We were all working to preserve the remaining sage scrub beds (a sacred plant to Western tribes) from San Bernardino area developers. Now, Manuel, as long as I had known him, was a mild-mannered man, content to let Vera make decisions for those Gabrielinos still active in tribal affairs. Maybe, it was the summer heat or the unruly kids playing nearby, I don't know. But suddenly Manuel jumped from the bench, strode over to the several families with the kids, and in a stern and steady voice proceeded to remind them that all the land upon which they now walked and drove had once belonged to his people who had peaceably roamed the land. A moment later, he returned, and we resumed without comment. But I've never forgotten that moment, not because it was embarrassing for Manuel or for the bewildered families who had no idea who he was, but for what it demonstrated to me. That even in the middle of one of America's great cities, having long ago replaced the vast beds of coastal sage and peaceable people, there remain ghostly encounters with a very real pre-European past. And that's the sort of glimpse Black Elk Speaks provides in wonderful detail. The past comes alive through the proverbial eyes of a revered man whose people have been overly villified or overly romanticized, but rarely portrayed in all their human complexity. Black Elk, I think, manages the complexity as he recounts experiences from boyhood through young adulthood. From the poetically practical names of people and months, eg. Moon of the Grass Appearing (April), to the migrations across traditional lands, to the historic battles with the Wasichus (white men), to the Ogalalas' end at Wounded Knee, the reader is immersed in a strange and vanished culture. It's said in the notes that the Indian Black Elk and the white man John Neihardt possessed something of a common spirit that communicated across racial and linguistic barriers. As it reads, the seamlessly flowing narrative demonstrates something of a communal overlap, a kind of deeper commonality. The book's centerpiece revolves around the nine year-old Black Elk's Great Vision, recounted here in all its colorful and lyrical detail. Whatever the prophetic value, the strength of Black Elk's Vision clearly guided and infused him for the remainder of his life, and provides a powerful potrait of another people's wishes and dreams. Frankly, I've never put much stock in the metaphysics of visions, whether of the white man's Biblical variety or the Native American's pantheistc kind. But I have to confess that when I compare America's great national vision of Manifest Destiny

Black Elk's Narrative shows us what we have lost

Published by Thriftbooks.com User , 20 years ago
This is one of the singularly most powerful narratives I have ever read, and, being an academic focused on Native Languages, I have had the opportunity to read many. Black Elk tells the story of his life and his spiritual experiences unabashedly, and with the force and clarity that come with wide experience and careful contemplation. He was a singular individual, and his story is unique, even among his own people. His account is dense and complex, especially regarding his spirituality - and it is naturally very confusing to a Westerner. The historical accounts are fascinating, and more accessible, and drive home with vivid imagery the human beings our country devoured in the name of "progress". (Something particularly useful to remember at this juncture in our history) For his story to have the right impact, you must believe what Black Elk says to be true. If you're coming to his story for "feel good" new-age spirituality, go read something mushy from the Oprah Book club. Any sort of Western paternalism, most often cloaked in new-age terminology and half-witted sophomoric Literary criticism, about how Black Elk uses "wonderful metaphors" and "fabulous, alive imagery" is really missing the point and dishonors one of the key figures of a very important Native American religious movement - the Sun Dance. This movement is not only important to the Sioux, but to many other tribes in the great plains. Black Elk is telling you the truth. He wasn't "smoking peyote" as some suggest, or anything of the sort. He really did see a red buffalo that led him through the spirit world. Suggesting that he was confused or delusioned, or feeding half-truths to Mr. Neihardt is like patting him on the head and telling him to trot off to bed so that the 'big boys' can think important things. If you don't accept that premise, you will never understand him or any of his people. One aspect of his life that has fascinated me the most is his fearless application of faith. He was given a vision in which he was told that a bow would protect him in battle. So he promptly got the bow, and then went out in front of the Union machine guns with it held over his head, riding back and forth. After several trips across the line, he was hit once with a bullet. This he attributes to his own momentarily failing faith, and not to the falsity of the vision. Another man believed he could stop bullets with a sacred pelt-cloak draped across him. He put it on and stood calmly at the crest of the hill in full view of the Union guns. After a while, he came back down and shook the bullets from his clothing onto the ground. I find myself wondering how many of the sweating, blubbering "religious" people in the modern age would be so brave as to put their professed faith into such direct action. Black Elk and many of his fellow warriors LIVED the "matrix"'s dualistic philosophy instead of watching it on TV. This underscores an excellent message in his narrative - where have we come to? Why do we l

One of the Best Books I've Read

Published by Thriftbooks.com User , 22 years ago
This is the biography of Black Elk, a wichasha wakon (priest) of the Oglala Sioux, as recorded by John Neihardt. This is not some cheesy new age fiction nor is it a dry documentary told from a western view point. This is the actual life story of a holy man and goes into great detail about his visions. From his words we are able to catch a glimpse of Native American religion and spirituality on the Great Plains as it was in the late 1800s/early 1900s. This stands out as one of the greatest works on Native American religion to date. I highly rocemmend that ANYONE read this book.

Published by Thriftbooks.com User , 22 years ago
To potential readers, worried about the authenticity of this work and its right to speak for Native Americans:The question of how closely the words of this book follow the words of Black Elk has long been debated. It will not be decided here. Turn to the scholarly literature if you truly wish to pursue an answer. I have done that and in my mind (and I do have some education in these realms) am at peace with the book as a genuine expression of turn of the century Lakota spirituality. Neihardt may have written the words, and Ben Black Elk (Black Elk's son) may have done the translating, but Black Elk lived the life, as is corroborated by other sources.I use the work in my introduction to religion classes, to bring another world to life for my students. Is Black Elk's vision theirs? Of course not. Is the book even Black Elk's vision? Perhaps not exactly. But it is a vision of power and every now and then it awakens a vision in students living 100 years after Black Elk. I belive Black Elks speaks and there is some power in his words still.
Trustpilot
Copyright © 2022 Thriftbooks.com Terms of Use | Privacy Policy | Do Not Sell or Share My Personal Information | Accessibility Statement
ThriftBooks® and the ThriftBooks® logo are registered trademarks of Thrift Books Global, LLC