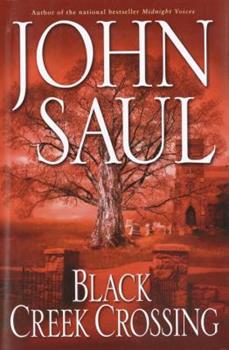 Angel Sullivan, a 14-year-old who never fits in, gets a chance for a fresh start when her family moves to Roundtree. Myra, her obsessively religious mother, and Marty, her alcoholic father, buy a house on Black Creek Crossing, even though the place is rumoured to be haunted. Soon, strange things begin happening in the house.

Published by Thriftbooks.com User , 15 years ago
This novel had me from page one. The pace of the book never let up, the characters were wonderfuly developed and made you feel what they were feeling. I could not put this book down once I started it. If you love John Saul, love tales of witches and old haunted houses, then this is a must read.

Published by Thriftbooks.com User , 15 years ago
I loved this book. This is the second book I have read by John Saul, and I thought it was great. I couldn't stop reading it, I'd spend hours reading page after page just to see what happened next. This is a wonderful, suspenseful book which I would recommend for anyone who loves a good read.

Published by Thriftbooks.com User , 16 years ago
Angel is an outcast who moves into an old house that is haunted because four hundred years ago the mother and daughter that lived there were practising withcraft. She befriends another teenage outcast named Seth and with the help of a strange cat that try to uncover the secrets of this house. This is a chilling read and is well written. There is nothing groundbreaking here, the whole haunted house thing has been done to death, but Mr. Saul does it well and delivers if you are looking for this kind of story. One small thing annoyed me. A few times during the story a group of people would witness something supernatural happen and they would bascially just ignore it and not bother to discuss what they had just seen. Small thing, but I had to shake my head. In my humble opinion, one of the best ways to make an unreal situation seem real is to have the characters react as a normal person would in that situation. Still, 5 stars.

Published by Thriftbooks.com User , 17 years ago
Angel Sullivan has always been the outcast, suffering the taunts of cruel schoolmates and the wild fits of an alcoholic father. Things for Angel's family have hit rock bottom until a call from her aunt has them moving to a new town and making a fresh start. In the town of Roundtree, Massachusetts a beautiful home awaits, a home that is selling at a steal of a price, there is only one problem...the house at Black Creek Crossing holds a murderous secret.Seth Baker lives in Roundtree and, much the same as Angel, he too is the outcast of his schoolmates, as well the victim of a psychically abusive father. Seth does his best to deal with his father, but finds sanctuary in photograph taking, until he meets Angel.As Seth and Angel become better friends, Seth tells her of the deadly legacy surrounding her home and the rumors of supernatural possession that still dwells there. Angel, desperate for the truth about Black Creek Crossing, uncovers a centuries-old horror that lies within her home's walls.Now, that Angel and Seth have uncovered the dark secrets buried in Roundtree, they find themselves trapped in a maelstrom of desire and violence that will erupt in unspeakable tragedy.`Black Creek Crossing' is a chilling page-turner that begs to be read in one sitting. From the shocking opening to the explosive climax the plot speeds along with unstoppable force. Vivid gothic descriptions and likable characters combined with creepy scares will hold readers breathless until the final page has been turned. John Saul is THE master of the horror novel, there is absolutely no one better. His novels are always original, well written, fast-paced and expertly plotted. Expect to see `Black Creek Crossing' at the top of the bestseller lists for it's one of John Saul's best novels.A MUST read!Nick Gonnella

Saul's Old Black Magick Will Hold You in Its Spell

Published by Thriftbooks.com User , 17 years ago
I don't normally read horror fiction, but I always make an exception for John Saul's novels. He has a rare talent for decanting the old stereotypic conventions of the genre into engrossingly new American Gothic bottles that always somehow manage to transcend the melodramatics and cliched limitations of his chosen subject area. His latest highly-complex, beautifully-crafted chiller kept me glued to my chair until its gory lightening-and-thunderbolt-from-the-blue denouement shocked me back shuddering into the relative sanity of the real world.Coupled with an offer of employment for her ne'er-do-well, drunken husband Marty, devoutly-religious Myra Sullivan sees her wealthy, realtor sister Joni Fletcher's encouragement to buy a badly run-down, old house in Roundtree, an historic New England community, as a sign from heaven offering a fresh start for her troubled family. Unfortunately, the Sullivan's bright daughter Angel's hopes that a new school in a new environment will transform her life are soon dashed. Once again, she's a total misfit within her peer group: her only friends, her classmate and fellow pariah, Seth Baker, and a mysterious, Cheshire-like cat that apparently comes with her new home whom she names Houdini. Fighting a losing battle against terror and harassment on all sides, what happens to Angel and Seth after John Saul juxtaposes the influence of the Sullivan house with its tragedy-haunted past upon its desperately, dysfunctional modern inhabitants is magical storytelling at its suspenseful best. I should actually say 'MagicK' because...once Houdini leads them to a witch's grimmoire hidden away for more than three hundred years in the Sullivan's basement and then to a safe hideaway where they can practice its teachings...that's what his desperate young protagonists eventually turn to as their only defense against a world where neither their parents nor their peers offer them any welcome, acceptance or personal security. The horrific results of their steadily increasing involvement with Old Magick are literally and completely spellbinding. There are so many strengths to "Black Creek Crossing". Most horror novels require tremendous leaps of the imagination in order to accept their premises. Here, the utterly realistic characterizations...the beautifully-detailed backstory...and the utter 'logic' of the youngsters' actions given the pressures of their situation all combine to create a moving and thoroughly compelling reading experience.
Copyright © 2020 Thriftbooks.com Terms of Use | Privacy Policy | Do Not Sell My Personal Information | Accessibility Statement
ThriftBooks® and the ThriftBooks® logo are registered trademarks of Thrift Books Global, LLC