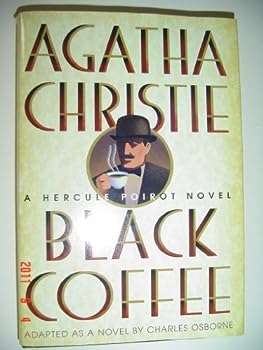 Nearly a quarter-century after her death, Agatha Christie remains the most popular mystery writer of all time. Now, in a celebrated publishing event, fans and newcomers alike are treated to another... This description may be from another edition of this product.

Published by Jake71TyTy , 1 year ago
I just received my $100 book. I can’t believe it was just thrown into a plastic bag and shipped. It is a very expensive collectors edition. Now with creases in the covers. Thanks for nothing.

Published by Thriftbooks.com User , 22 years ago
Poirot is back in a play that has been rewritten into a mystery novel. As in past mysteries, Poirot finds plenty of support. This time it's in his valet George, who has a rare ability to press trousers just right, although he has no imagination, Hastings who has returned to England on a visit, and Inspector Japp who shows up later in the mystery.Take a secret formula, an eclectic group of people, one well-trafficked room, a Belgian investigator, his best friend and aid, a Scotland Yard investigator, and you have the makings for one of Agatha Christie's brilliant mysteries. Premier physicist, Sir Claud Amory has decided to create a formula for his company, but he is doing so at home without any protection. Sure enough, the worst happens, and Poirot is the one he turns to. Poirot invites Hastings to join him on the train trip to the country. By the time Poirot and Hastings arrive, a murder has occurred, and no one has any sympathy for the victim, making the circumstances worse for those involved. What starts as a simple case of thievery, ends in murder, lies, and espionage.Author Charles Osborne, who helps with this story, includes a map of the room where the crime takes place. The camaraderie of Poirot, Hastings and Japp is charming. The mystery seems simple at first, then the usual Christie twists and turns lead the reader down another more complicated path or two. Poirot finds the mystery to be far more than a sordid crime - it is a poignant, human drama. I found it to be an enjoyable, traditional British mystery, and highly recommend it.

The book was great!

Published by Thriftbooks.com User , 23 years ago
This book is the best book that I have read by Agatha Christie. The way all of the characters were made to look guilty made the book even more interesting. I think that the book was well written and that Charles Osborne adapted this novel well. I would love to read more of Agatha and Charles' work.

Christie fans will love this

Published by Thriftbooks.com User , 24 years ago
Early in the 1930's, scientist Sir Claud Amory asks Hercule Poirot to come out to his estate that lies twenty-five miles to the southeast of London in order to protect a new atomic explosive. However, before Hercule arrives, Claud realizes that someone has stolen the formula. Claud tells everyone that if the guilty party would anonymously return the missing paper, no prosecution will occur. Claud turns off the lights. When they come back on, Claud lies dead and Hercule, on cue, makes his appearance. Hercule begins his investigation, suspecting everyone because all of the people present had a motive and an opportunity. Could the deceased's son do it in order to pay off a debt? Or did the daughter-in-law, the secretary or his sister kill him? Hercule realizes that anyone of them could have done the act, but it is up to him to determine who actually did it. Surprisingly, Charles Osborne's adaptation of a Christie play is a brilliant rendition of on! e of the world's most beloved detectives. The story line is classic Christie with its "someone in this room is the murdererer". All of the individuals present having strong motives and opportunity, a classic Chritie trademark . Readers will not be able to separate Osborne's rendition of Poirot from Christie's as the adaptation strictly adheres to the original character. Fans of Christie, especially Poirot, will want to read this wonderful addition.Harriet Klausner
Trustpilot
Copyright © 2022 Thriftbooks.com Terms of Use | Privacy Policy | Do Not Sell or Share My Personal Information | Accessibility Statement
ThriftBooks® and the ThriftBooks® logo are registered trademarks of Thrift Books Global, LLC