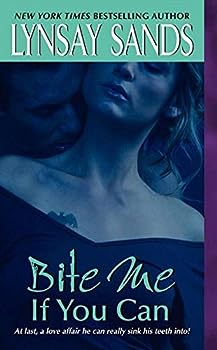 Bite Me If You Can (Argeneau Vampires, Book 6)

(Book #6 in the Argeneau Series)

Once Bitten . . . One minute Leigh is walking home in the early hours of the morning, and the next a vampire is sinking his teeth into her neck. Turns out it was a rogue vampire marked for... This description may be from another edition of this product.

Lucian is the one story i couldnt wait to read

Published by Michi , 3 years ago
I absolutly adore the argeneau series!! Lynsay sand puts together a great story filled with romance, thrills, humorous wit, charm etc. I always find myself chuckling or biting my lip in anticipation of whats to come while i devour the stories. Absolutely recommend!!

Just to good to put down

Published by Thriftbooks.com User , 15 years ago
When you sit down with the Argeneus' family you know you are in for a great ride (read!) In this addition I was total surprised by the hero. When I ran out to the store (yes they are that good) I was sure the tale was about another character. But you learn to love the long feared head of the family. And just in case you have missed a story or two Lynsay Sands puts a family tree so you can see the matches already made and hope to soon read the character looking for the mate. This book is worth your money and most important your time. Enjoy!

Published by Thriftbooks.com User , 15 years ago
I have read every single one of Lynsay's vamp series and I personally think Bite Me If You Can is the best one to date. The book arrived last Thursday and I read it in 3 hours. It was so good and funny. I was cracking up. Seeing Lucien so out of control was dynamite. Lynsay Sands has outdone herself with this awesome book!

brilliance in comedy and romance!

Published by Thriftbooks.com User , 15 years ago
I think this is my favourite Argeneau since Single White Vampire. I read this some time back, and I thought it really was one of Lynsay Sand's strongest efforts to date. Leigh Gerard is going home from work late one night, when she is approached by a co-worker Danny. He is acting rather weird, but before she can decide to get far away, she ends up at a house with a rogue Vampire named Morgan. Morgan has started the process to turn Leigh. He has been turning people left and right to create his own vampire clan. Only the enforcer of the Argeneaus, Lucian, is on Morgan's trail and determined to put a stop to his nonsense. He comes in with his crew to wipe out the vampire nest, but discovers Leigh is not really a vampire...quiet yet. Instead of destroying her with the others, he takes her home and protects her. Neither Leigh nor Lucian (even more grumpy than Lucern is!!) are happy with the romance, especially since Leigh is learning she is a vampire in the makings, too. A little darker than most of Lynsay's books, but I like that she steps outside of the box and delivers a book that is special unto itself. It's charming, witty, and an utter delight. Many series start to lag after the first three, then you see the writer struggling to keep making the series fresh. It's not an easy chore, because you have to remember that a reader new to the series will need explanations, while those already hooked don't want to hear a lot of repetition. It's walking a tight rope between the two that can kill a series. Sands proves she is a master and does each one in STYLE that promises to keep this series going and going....sure makes me happy!

Bite Me If You Can

Published by Thriftbooks.com User , 15 years ago
Walking home from work in the wee hours of the morning, Leigh is attacked and kidnapped by a rogue vampire. Luckily, hunters targeting the rogue arrive to free Leigh but not before the rogue turns her into a vampire. Going through the turn isn't easy and someone needs to care for Leigh during this painful time. Lucian Argeneau doesn't exactly want the job but fate seems have other ideas. A hunter that's been around for over two thousand years, Lucian has found little to excite him. Until Leigh. Now Lucian is eating food, drinking coffee and dreaming about sex with Leigh. Unfortunately the rogue that attacked Leigh is still at large and coming for her! This is my first experience with the Argeneau family. I am now tracking down the other five books in this series. I gobbled up Bite Me If You Can in one afternoon and immediately began my quest for more of Lynsay Sand's writing. Let me tell you why I am now an official Lynsay Sands fan, Bite Me If You Can is full of hot and steamy romance peppered with enough humor to make me laugh out loud. I loved every morsel! My only excuse for missing this series until now is my prejudice against cartoon covers and some of the Argeneau books have cartoon covers. Shame on me! And if you've missed this yummy paranormal romance series for the same reason, shame on you too! Lecture me about judging a book by it's cover later, for now, get your own copy of Bite Me If You Can. You'll gobble it up too! Annmarie Reviewed for Joyfully Reviewed
Trustpilot
Copyright © 2022 Thriftbooks.com Terms of Use | Privacy Policy | Do Not Sell My Personal Information | Cookie Preferences | Accessibility Statement
ThriftBooks® and the ThriftBooks® logo are registered trademarks of Thrift Books Global, LLC