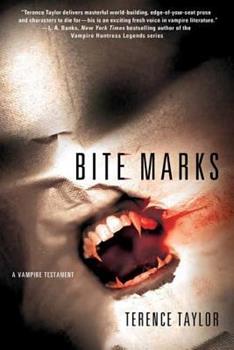 A teenage runaway is killed by a sadistic vampire with the pathology of a serial killer, who has stalked her family for over a decade. Brought back to life to feed on her child, she's killed again -- but not before reviving her first victim, her firstborn. The undead infant escapes, triggering a citywide search for a vampire baby whose existence threatens to expose the entire vampire society. And they will stop at nothing to make sure that doesn't...

An Epic and Accessible Vampire Novel

Published by Thriftbooks.com User , 12 years ago
As a member of the Generation X crowd I have not read novels for a long time. However, this novel has recently reignited my love of the written word. From start to finish I was enthralled by "Bite Marks". As a person constantly on the go I found the short chapters to be a blessing, while not feeling short changed by the characterizations. For anyone wondering, there are characters that are introduced that make short appearances, but they will be introduced back into the story throughout the second and third book. Recommended!

WHOOPI GOLDBERG GOT IT RIGHT!

Published by Thriftbooks.com User , 12 years ago
In a recent issue of People magazine, Whoopi Goldberg shared how much she was enjoying a new vampire novel called Bite Marks. Intrigued, I ordered it and now have to say I agree 200%! This vampire story is unlike any I've ever read. It's not only scary and sexy, but it also very effectively reinvents the vampire lore, injecting fresh blood into these infamous ancient monsters. In the Bite Marks world, several types of vampires exist, and their powers are original and cleverly imagined, the author even works in how the newly discovered AIDS virus affect the undead. Put simply, Bite Marks has the creative ambition of Anne Rice's vamps mixed with the page-turning magic of Dan Brown, all told through gritty Stephen King-esque prose. It's epic too, spanning many centuries, and the author brilliantly employs haunting flashbacks to flesh out the characters and move the 1980's NYC storyline along. Yes, as you may have heard, there's a baby vampire, and a serial killer vamp who gives new meaning to the concept of performance art. Hey, there's even a cameo by Warhol himself...but that's all I'll say. To divulge more would be cheating future readers out of all the fun and twisted surprises. If I could give Bite Marks more than 5 stars, I would! One extra tidbit: I found out that a sequel, Blood Pressure, is definitely coming out early next year. I've already added it to my wish-list!

Published by Thriftbooks.com User , 12 years ago
. . . but I have a lot of friends who write terrible books, so I just don't review them. I am delighted to say I LOVED Terry's new book! I am not even a real vampire fan, but BITE MARKS kept me avidly reading with a great plot (never confusing, always zooming along), characters (well defined, well-rounded and some of them really endearing and nasty), and some real ghastly horror moments. He even made me cry, damn him, at one point toward the end of the book! Grab this one--I read it through in a weekend and even skipped some good TV shows because I wanted to find out what happened next. Can't wait for vol. II.

Bringing Scary Back to the Vampire Tale

Published by Thriftbooks.com User , 12 years ago
Adam Caine, a vampire less than a hundred years old, enjoys his sadistic streak when it comes to victims, especially building up hopes and dreams then tearing them to shreds and savoring the aftermath. Take Nina, for instance. He forces her into prostitution, gets her addicted to heroin, and then turns her into a vampire to watch her destroy her own five-month-old child. Things, however, do not go as he planned; once transformed to a vampire, she does feed on her child, but brings him back before Adam can destroy her. Now, an infant vampire crawls loose somewhere in New York City, and Adam must seek help from the woman who changed him into a vampire before the Triumvirate finds out and the secret world of vampires becomes known to the humans. Meanwhile, estranged lovers Steve Johnson and Lori Martin try to piece together their latest book focusing on vampires. The ad they placed in the Village Voice brings in only one serious response, but they haven't heard from her -- a young woman named Nina who claims to have firsthand knowledge -- and are about to give up on her, until her brother Jim shows up on Steve's doorstep. When they learn of her violent death, Jim convinces them to help him find her killer, not realizing until too late the monsters they must battle to avenge Nina are real. With his first novel, Terence Taylor offers a great addition to the vampire genre. He keeps with the traditional mythos, coming out only at night, feeding on human blood, controlling human minds, but also draws from other vampire tales. His Autochthones -- a race of vampires living in the tunnels beneath New York's subway system -- worship a creature similar to Bram Stoker's White Worm. He adds new twists to vampire history, as well, turning such events as the crash of the Hindenburg into a cover up for vampires trying to cross from Europe to the States, and creating a system of government to maintain order between their world and the human world. Taylor tackles something I've always wondered: what would happen if a vampire becomes infected with HIV. The HIV begins to slowly destroy an infected vampire, which is what happens to the nest created by Baby, but Taylor's creativity comes into play when describing what happens when an infected vampire bites a victim. They die, only to rise sometime later as a vampire zombie, of sorts, with the infected blood itself using the new body as a vessel to infect more people and other vampires. The scenes in which the blood passes are quite astonishing and imaginative, complete with exploding eyeballs and other goriness. "Bite Marks" contains well-developed characters, too. Adam Caine (born Frederic Hartwell) is evil personified: cruel, merciless, willing to do anything to get what he wants no matter who it harms -- as long as he remains untouched. HIs vampire mother, Perenelle de Marivaux, struggles to maintain a balance between her human identity and her vampire one, at times acting as peacemaker for Adam while secretly w

Published by Thriftbooks.com User , 12 years ago
Wow. What a page turner. Unlike Terence's short stories that were paced at a more languid, jazz flow, Bite Marks is in 4/4 time. The story sweeps you through an edgy New York that in no way resembles the corporate Disneyland of today. His well-drawn characters continue to surprise with multi-dimensions, hidden histories, and complex motivations. And the malicious satisfaction of the villains! Terence clearly has a background in visual media because he paints such a vivid picture of the times, places and circumstances his vampires transverse. Except, his professional experience is in kid's TV and Bite Marks is no place for children! Terence asks, "Do you believe in Vampires?" After reading Bite Marks, I do know that I believe Terence is the hottest, new horror writer on the scene!
Trustpilot
Copyright © 2022 Thriftbooks.com Terms of Use | Privacy Policy | Do Not Sell My Personal Information | Accessibility Statement
ThriftBooks® and the ThriftBooks® logo are registered trademarks of Thrift Books Global, LLC