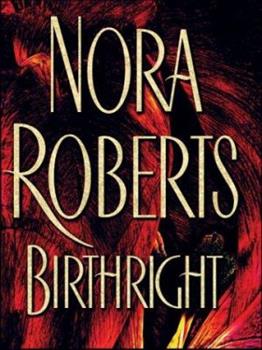 This description may be from another edition of this product. From beloved author Nora Roberts comes the #1 New York Times bestseller about shattering loss and shocking discovery--set in a small town nestled in the Blue Ridge Mountains... When...

Published by Carissa42977 , 1 year ago
The story line was good with a lot of good characters. Down to earth story line and surprising mystery ending.

Published by Thriftbooks.com User , 13 years ago
Callie Dunbrook is an acclaimed archaeologist at the top of her game, but one appearance on television changes her life forever. While working on a historic dig in Maryland, she discovers she was kidnapped when she was an infant and raised by another family. As she struggles to deal with her new family ties, the sudden appearance of her anthropologist ex-husband Jake Graystone, she also has to try to find out who is sabotaging the site. I really enjoyed this book! It is now one of my favorites. I have been on geology digs, so I really liked the setting of this story. There was good rapport and chemistry between Jake and Callie. They made a very likeable couple. The secondary characters were also an important part of the story. The biological family Suzanne, Jay, and Doug were well written.

Published by Thriftbooks.com User , 18 years ago
This is the best Nora Roberts has done in a very long time. Not that anything she writes is bad, but this one is simply classic Nora, along the lines of "Sanctuary" and others of her best works.Simply put (there are lots of satisfying plot lines to sort out), feisty and beautiful Callie Dunbrook, a thirty-something archaeologist, begins work on what promises to be one of the decade's major finds--smack in the middle of the Civil War town of Antietam Creek--and discovers much more than bones and artifacts. A shocking truth about her past, combined with the equally shocking appearance at the dig of her ex-husband, anthropologist Jake Graystone, has her in a turmoil.As Callie and Jake struggle to work together without letting their equally hot tempers explode in the stifling heat, the mystery of Callie's past threatens to surround and destroy everything they are working for and everything they are. And they are only two of a group of equally engrossing people, both on the dig and off.Absolutely first-rate Nora, and the perfect beach book. Buy it and give yourself a real summer treat.

You can always count on Nora Roberts...

Published by Thriftbooks.com User , 18 years ago
Nora Robert's books are always winners, I am never disappointed with her stories or the caliber of her writing and this book is no exception. I am amazed how she can keep writing new and exciting stories. Years ago, a baby girl was stolen/kidnapped from the local mall during christmas- leaving a devestated mother, brother. Now, Callie Dunbrook is an archeologist who is digging a site with her ex husband. Suzanne sees Callie and immediately knows it is her kidnapped daughter- she contacts Callie, but callie know she is mistaken, she is not adopted! Of course, she is mistaken and Callie ( with the help of her ex husband, Jake) begins to uncover the mystery of her life. However, this immediately puts her life in danger as there are others who do not want this illegal baby scheme exposed. A nice subplot to this is Doug- Callie's natural brother whose life was turned around by his baby sisters disappearance. His love story is a great subplot in this book. All in all, a great book if you like mysterys, suspence, romance and intrigue- this book has it all.

She is having a great year!!!

Published by Thriftbooks.com User , 18 years ago
I love Nora Roberts work and I am always amazed by the quality to the number of books she cranks out a year. I really have to say she has out done herself this year as I think this was one of her best books yet. I also felt this way about her last "In Death " installment to her mystery series written as J. D. Robb. This book was a thriller all the way though, turning the pages and not wanting to put the book down.In a mall around Christmas time a mother rushes to her three year old son who is scared of Santa. She turns back and her three month old daughter is gone! 28 years later this mother is watching TV and she sees her daughter. DR Callie Dunbrook, who is an archeologist on a site in Maryland where this child had been taken years ago. This mother Suzanne Cullen contacts Callie and Callie knows this woman is grasping at straws because she is not adopted.Well, Callie who snoops around, she is a digger now, finds out she was adopted. Her parents promise she was adopted in good faith. Callie is determined to get to the bottom of this black market baby stealing for everybody's peace of mind. Callie's ex husband is assigned to the same dig and he backs her all the way. But there are people who do not want Callie digging around and will even kill to stop her.This book was very creatively written, a true Nora Roberts romantic suspense thriller. Where innocent people was tangled up in this drama and even killed along the way. This was a book you could not put down for a minute. You do not want to miss this one. I really think it was one of her best!!

Published by Thriftbooks.com User , 18 years ago
Nora Roberts' prolific generation of novels has run the gamut from witchcraft on the New England coast to futuristic mysteries sizzling with attraction. Her latest endeavor carries uniqueness all its own, with its crafty combination of suspense and sensual romance. Archaeologist Callie Dunbrook's current assignment is to supervise a dig at an Antietam Creek, Maryland construction site. Finding human remains over five thousand years old, Callie needs more help at the site. When that help comes in the form of her sexy ex-husband Jake, Callie is furious with her supervisor, even as she continues to fight her attraction for Jake. While locals are angry at their loss of employment with the construction halted, seemingly innocuous pranks turn into murderous "accidents". Coinciding with the archeological find is the claim by local businesswomen Suzanne Cullen, that Callie is really her long-lost daughter, stolen as an infant. Tough, beautiful, and brilliant, Callie is the epitome of a strong female lead character. Her romantic sparring with Jake creates a sexual tension that keeps an even pace with the mystery, as Callie discovers that the accidents at the site may be related to her unearthing of her past including an illegal adoption ring. Earthy, compelling characters are the driving forces behind this mystery/romance, entrancing the reader from the get go, in a package that is quite possibly Ms. Roberts' best effort to date...
Copyright © 2020 Thriftbooks.com Terms of Use | Privacy Policy | Do Not Sell My Personal Information | Accessibility Statement
ThriftBooks® and the ThriftBooks® logo are registered trademarks of Thrift Books Global, LLC