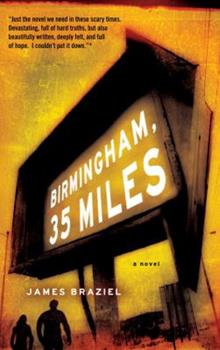 In this haunting and poignant debut novel, James Braziel tells an unforgettable story of love, family, and survival across a world that has already begun to die.... When the ozone layer opened and the sun relentlessly scorched the land, there was nothing left but to hope. Mathew Harrison had always heard of a better life as close as Birmingham, only thirty-five miles away--zones of blue sky, wet grass, and clean breathable air. But to him it's a myth,...

Published by Thriftbooks.com User , 13 years ago
Imaginatively conceived and beautifully written, this first novel casts its characters and its readers into future landscapes of devastation and waste in the U.S. South, a setting that acknowledges the historical violences of the region's past and yet also presciently forewarns of ecological disasters to come if we do not have the courage to create alternative worlds.

The Enduring Landscape of the Mind

Published by Thriftbooks.com User , 13 years ago
James Braziel succeeds in creating a novel with powerful imagery and poignant characters. His main character, Matthew, is caught in a struggle to survive in the devastated South after it is scorched by a hole in the ozone. Longing for and bound to the past, Matthew labors to endure the harsh and brutal conditons of the work camp, refusing to abandon the land of his fathers, a vast desert where buildings and hopes ebb away. In one symbolic scene, Matthew holds and treasures a stolen library book - a book which is deteriorating rapidly into dust. Amid the bleak and uncertain future Matthew faces, Braziel infuses great love, humor, and tenderness. In this poetic and beautiful book, Braziel portrays a world where nothing is permanent, where decay threatens to evaporate all that has been known, where love is meant to be enjoyed for its present joys, where time is frozen, and where the most vivid of all lands is the inescapable, captivating terrain of the human mind.

Published by Thriftbooks.com User , 14 years ago
In 2044, life is a short hard death as the hole in the ozone layer coupled with other human indignities ignored by those who scoffed at the climate crisis. They know Bush pseudoscience has practically destroyed the planet. Anyone born after it was too late only knows of endless heat and incredibly vast dust storms in the southeast dust bowl. In this world of an arid inferno Mathew Harrison earns a meager living as a migrant worker in and around Fatama, Alabama. He dreams of finding a better life thirty five miles to the north in Birmingham, but that is outlawed for people like him. Instead he and his father toil in government clay mines that the younger Harrison believes is fake but dangerous work that the Feds have come up with to shut up the outsiders; those not residing in the exclusive Saved World where the affluent live. In spite of the hardship conditions, Mat loves his wife Jennifer and feels they have a future because they have received the golden visas allowing them to obtain menial work in the Saved World. BIRMINGHAM, 35 MILES is an intelligently designed grim futuristic thriller that extrapolates much of the current debate on immigration, wealth distribution and climate especially rising temperatures and droughts into a strong parable of An Inconvenient Truth. The story line is vividly dark painting an ominous future for a much divided United States as dust bowls take over the southeast yet enclosed enclaves for the wealthy and their working class spring up in magnet cities like Birmingham. Readers will appreciate James Braziel's look at a portentous ill America that demands action now or condemn our descendants to hell on earth. Harriet Klausner
Trustpilot
Copyright © 2022 Thriftbooks.com Terms of Use | Privacy Policy | Do Not Sell or Share My Personal Information | Accessibility Statement
ThriftBooks® and the ThriftBooks® logo are registered trademarks of Thrift Books Global, LLC