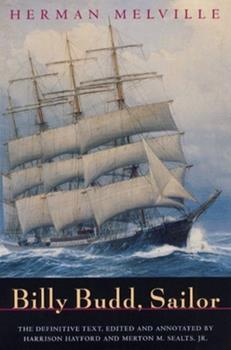 Hayford and Sealts's text was the first accurate version of Melville's final novel. Based on a close analysis of the manuscript, thoroughly annotated, and packaged with a history of the text and perspectives for its criticism, this edition will remain the definitive version of a profoundly suggestive story. "The texts are impeccably accurate. . . . The collection is accompanied by an unobtrusive but expert annotation. . . . Probably Melville's finest...

Published by Thriftbooks.com User , 16 years ago
The inmates of the 'Indomitable', the name of the ship, which is the centre stage of the evolving drama, have indomitable reactions. Innocence as well as antipathies are 'spontaneous and profound'. Man is irrational. He is governed by the heart, not the brain, but the heart can be innocent or evil: 'though the man's even temper and discreet bearing seem to intimate a mind peculiarly subject to the law of reason, not the less in his heart he would seem to riot in complete exemption from the law, having apparently little to do with reason further than to employ it as an ambidexter implement for effecting the irrational. These men are true madmen.' More, civilization is auspicious to natural depravity. It folds itself in the mantle of respectability. The innocent Billy Budd (Adam before the Fall) is a victim of profound iniquity (pale ire, envy, despair) and his reaction is indomitable. Starry Vere (fron the Latin 'Verus'), the captain of the ship, agrees that iniquity is a mystery, a matter for psychologic theologians, but for a military court only the prisoner's deed must be taken into account. Herman Melville, as a true calvinist, is obsessed by the existence of evil. He wrote a profound and dramatic masterpiece.

An investigation of evil and innocence

Published by Thriftbooks.com User , 20 years ago
The nearby review by "brothersjuddotcom" is excellent, and will introduce you to many of the issues and opinions on this text. However, there is one more issue that I would like to draw attention to. Melville is concerned in "Billy Budd" with the human capacity for malevolence: doing evil for the sake of evil.Some other 19th-century American authors like Emerson and Thoreau have fairly "sunny" views of human nature. Melville (along with Poe and Hawthorne) thought it was dangerous to ignore the other side of being human. In particular, Melville wants to address the question, Can a person do evil just for the sake of being evil?Why does Claggart hate Billy Budd so much? Jealousy may be part of it, but that could not explain the depth of his hatred. Claggart is simply pure evil. His evil is motivated by nothing but the love of evil itself. Melville wants us to see that people like Claggart are a real possibility. And those who, like Billy Budd, are "innocent" will be helpless in the face of such evil. If these issues interest you, you can pursue this topic through Poe's great short story, "The Black Cat," and St. Augustine's _Confessions_, especially "Book II" (really a chapter in length).The other great story in this anthology is "Bartleby, Scrivener." It seems, on the surface, to be merely a story about mental illness. A clerk starts to simply refuse to do his work, until he cannot care for himself any more, and is committed to an insane asylum. But this is not a story only about depression. The key of the story is that Bartleby once worked in the "dead letter" department of the post office. Seeing the mountains of letters -- carrying the hopes, fears, and plans of so many people -- ending in a sort of clerical limbo, helped destroy Bartleby's sense that life has a point. Now, Bartleby suffers from the "deadly sin" of sloth (better described as "spiritual apathy"). He lacks the faith, hope and charity needed to find meaning in life. Consequently, he gradually sinks into inaction.

Published by Thriftbooks.com User , 21 years ago
This novella is difficult to read, with long and complex sentences and perhaps unnecessary diversions. But its power and depth reward the effort it takes to read it."Billy Budd" is an allegory of a young seaman who strikes and kills a superior officer when the officer's cruelty and treachery become unbearable. The focus of the story is the debate over whether to execute the seaman (Billy Budd) for his crime. With passionate and terrifying logic, Melville (through the voice of Captain Vere) demonstrates that human perfection is impossible - not because we humans are weak, but because perfection simply does not and cannot exist in this world. To make decisions based on our notion of "divine justice" is not only impractical and foolhardy, according to Melville, but even immoral.If you like to think of yourself as an idealist, then reading this book will leave some unanswered questions in your mind, possibly for the rest of your life. I first read this story more than thirty years ago, and it still affects the way I think about almost everything to this day.

Published by Thriftbooks.com User , 22 years ago
This is a good book if you are not reading to be entertained by a story, but if you want to understand what Melville is really talking about and get a lot more out of it then you ever thought possibly, true some parts are slow but if you look at what Melville is doing with the language and references it is really a very good and well-written book.

Billy Budd is an historic event

Published by Thriftbooks.com User , 23 years ago
While much has been said about the value of the work itself, Billy Budd is important not only as an allegory, but as a fictionalized account of an actual event in the 1840s. The real Billy Budd was Philip Spencer, the son of the Secretary of War at the time. Spencer left Union College after founding the first social greek letter society, Chi Psi. He signed on with a training ship, the Brig of War Somers. The Somers was overcrowded with young recruits and captained by a paranoid zealot. Midshipman Spencer was falsely accused of fomenting mutiny and ultimately hung from the yard arm rather than betray the fact that he was recruiting for his fraternity. The need for secrecy was particularly keen, since his own father was famous for his prosecution of the Masons based on alleged murder to prevent the masonic secrets from being disseminated. His hanging was not only against the law at the time, but also offended all sense of fairness. Following the investigation of his murder, it became emphatically clear that it was necessary to change the way the United States was to train its navy. The direct result was the founding of the United States Naval Academy, in whose museum Midshipman Spencer's sword is on display.
Copyright © 2020 Thriftbooks.com Terms of Use | Privacy Policy | Do Not Sell My Personal Information | Accessibility Statement
ThriftBooks® and the ThriftBooks® logo are registered trademarks of Thrift Books Global, LLC