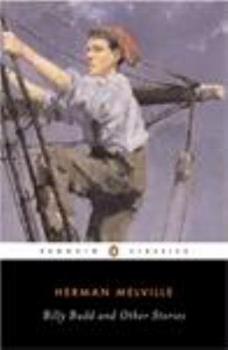 Brilliant short stories and a novella by the author of Moby-Dick "Billy Budd, Sailor," a classic confrontation between good and evil, is the story of an innocent young man unable to defend himself from wrongful accusations. Other selections include "Bartleby," "The Piazza," "The Encantadas," "The Bell-Tower," "Benito Cereno," "The Paradise of Bachelors," and "The Tartarus of Maids." For more than seventy years, Penguin has been the leading publisher...

Published by Thriftbooks.com User , 13 years ago
Herman Melville (1919-1891) is the great misunderstood and underappreciated genius of nineteenth century American literature. In Penguin's compilation of some of his best short stories we see his genius at full display of the authorial craft. Billy Budd is the tale of an innocent naive young foretopman on a British ship during the time England fought Napoleonic France. A recent mutiny of British tars at Nore had recently been put down. Billy is picked on by the burly and crude John Claggart. In retaliation against Claggart young Billy hits the bully. Claggart dies and Billy is forced to undergo a drumhead court martial. Captain Vere is forced to execute Billy for mutiny even though he knows the lad is an innocent soul. This tale presents the reader with a moral dilemma. Should persons in authority be merciful or should they see that strict justice is accomplished.? Vere (his name means "truth") is a complicated man. Billy Budd has been seen symbolically as a Christ figure beloved of the men aboard the ship upon which he serves. Composer Benjamin Brittain later turned this tragic tale into a successful opera. Billy is the innocent outsider who is a sacrifice to the realities of a tough world. I wonder if Melville who had lost a young son saw himself as Captain Vere and Billy as his deceased son? Benito Cereno deals with a seizure of a slave ship by Africans on their way to America. The ship is commanded by Benito Cereno a Spaniard but when it encounters the American whaler ship under Captain Delano deception is planned by the slaves. Delano believes the ship is still led by Cereno only to learn he is a prisoner under the crafty slave Babo. Melville was against chattel slavery. The story is a complex examination into the stain of slavery and the deceptions we face in life. Bartelby is an unusual story about a New York scrivener who labors in a laid back lawyer's office. Bartelby likes to say "I prefer not to..." in refusing to do certain duties he is asked to perform. He later is sent to the Tombs prison and dies. We learn he once worked in the dead letter office. Bartelby may be a portrait of Melville whose works were received as dead letters by the fickle public. The Encatantas or Enchanted Islands is a series of vignettes of visits made to the Galapagos Islands. Melville considered penguins to be the most worthless animals on earth. There are also stories of shipwrecks and the strange flora/fauna of the islands. I found this story to be a delight. The Bell Tower deals with an inventor who dies following making a clock striking device. The story is set in the Middle Ages and indicates the futility of human striving and creation. The Paradise of Bachelors and the Tartarus of Women is a slight tale of the joys of being a bachelor and the hades of women forced to worked in a paper mill. Herman Melville is not an easy author to digest and understand. My few comments on these profound works only scratch a small surface of their complex artistry.

Published by Thriftbooks.com User , 16 years ago
Personally, I thought this was a great book. This book follows a man named Billy Budd through the end of his life spent in the English navy. Although this book had some boring parts, it was overall a great story line. I was impressed with story more than the writing, which ran a little longer than I thought it should have in some parts. However, the main story was very clever and presented a lot of great ideas. The story was set in 1797 during one of Britain's wars with France. Most of the story takes place on a ship called the Indomitable. There had been a lot of mutinies in the British navy, and the ship is overall a tense place. To add to it the men find the quarters too crowded. Billy Budd starts out on a boat called the Rights of Man, a merchant ship, and is put into service on the Indomitable. The story to me is about good versus evil. The whole book seems to be a major analogy of the simplest form. Billy is good. Claggart is bad, and Vere is reason. The major plot involves Billy killing Claggart in response to evil. Billy seems to be completely unaware of badness. After being offended by Claggart, Billy punches him and accidentally kills him. Then a court is set up to determine Billy's punishment. The characters have very obvious symbolism to the struggle of good and evil. When Billy joins the Indomitable he is about 20, handsome, kind, and basically personified innocence. Claggart is an older man who moved up in rank mainly because he could please people, but is clearly evil. I think that this is genius. Even in my life I can think of people who get ahead in life simply through attitude, which I find to be a horrible representation of a man. I believe men should be judged more on their values, or set of morals, which determine all of his endeavors. Even in schools the straight A students are not always the people who are most able to do jobs. However I use this more as an analogy than an example because this story deals mainly with good and evil. Finally, there is Captain Vere. He is an older man, who is implied to be intelligent although not directly show to be. He loves to read, and is a conserved man who is seen as fair, and well liked among the sailors. To me he doesn't represent a person. I see Vere as the challenge of judgment. He is a man given all the information, a just fairness, and intelligence. I find that even though not all people come off as having equal intelligence, it's more of a language barrier. Until you get to know someone its like looking at the surface of an ocean. When it comes to their ideas you can only see the tip of the iceberg, and it's impossible to tell for sure how deep those thoughts go, even if you think you have an idea. I think that most people have this reason and understanding, under the surface, that is represented by Vere. I must say that some people wouldn't like this book because they might find it stupid or boring, but the principles that are suggested by this book are real and true to today.

Published by Thriftbooks.com User , 21 years ago
This novella is difficult to read, with long and complex sentences and perhaps unnecessary diversions. But its power and depth reward the effort it takes to read it."Billy Budd" is an allegory of a young seaman who strikes and kills a superior officer when the officer's cruelty and treachery become unbearable. The focus of the story is the debate over whether to execute the seaman (Billy Budd) for his crime. With passionate and terrifying logic, Melville (through the voice of Captain Vere) demonstrates that human perfection is impossible - not because we humans are weak, but because perfection simply does not and cannot exist in this world. To make decisions based on our notion of "divine justice" is not only impractical and foolhardy, according to Melville, but even immoral.If you like to think of yourself as an idealist, then reading this book will leave some unanswered questions in your mind, possibly for the rest of your life. I first read this story more than thirty years ago, and it still affects the way I think about almost everything to this day.

Published by Thriftbooks.com User , 21 years ago
billy budd feels remarkably closed for an unfinished work. yes, the story could have been told in a few pages, but it would totally lose the biblical feel and psychological probing, which melville exhibited so well in "moby dick". the short story duo "a paradise of bachelors / the tartarus of maids" is a creepy, sexually disturbing nightmare worth the price of the book alone.

Billy Budd is an historic event

Published by Thriftbooks.com User , 23 years ago
While much has been said about the value of the work itself, Billy Budd is important not only as an allegory, but as a fictionalized account of an actual event in the 1840s. The real Billy Budd was Philip Spencer, the son of the Secretary of War at the time. Spencer left Union College after founding the first social greek letter society, Chi Psi. He signed on with a training ship, the Brig of War Somers. The Somers was overcrowded with young recruits and captained by a paranoid zealot. Midshipman Spencer was falsely accused of fomenting mutiny and ultimately hung from the yard arm rather than betray the fact that he was recruiting for his fraternity. The need for secrecy was particularly keen, since his own father was famous for his prosecution of the Masons based on alleged murder to prevent the masonic secrets from being disseminated. His hanging was not only against the law at the time, but also offended all sense of fairness. Following the investigation of his murder, it became emphatically clear that it was necessary to change the way the United States was to train its navy. The direct result was the founding of the United States Naval Academy, in whose museum Midshipman Spencer's sword is on display.
Copyright © 2020 Thriftbooks.com Terms of Use | Privacy Policy | Do Not Sell My Personal Information | Accessibility Statement
ThriftBooks® and the ThriftBooks® logo are registered trademarks of Thrift Books Global, LLC