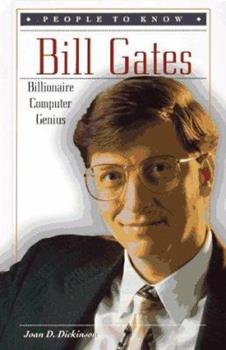 Considered a math whiz, Bill Gates dropped out of Harvard University to pursue his dream of creating and selling software programs for personal computers. He has achieved his dream.

Published by Thriftbooks.com User , 14 years ago
I bought this book for my son who had to do a biography report on someone. He's in 5th grade and loved this book. He thought it was the perfect choice for a book about Bill Gates. It wasn't too young, but it wasn't too adult and difficult to understand. I'm very glad I made this purchase.

Published by Thriftbooks.com User , 15 years ago
Bill Gates Billionaire Computer Genius Joan D. Dickinson Have you ever dreamed of inventing something all your own and making millions, billions, even trillions of dollars off of it? Imagine being an ordinary school boy from Washington who would soon find him self in an extreme position of power; the richest man on the planet. Bill Gates was born on October 28th, 1955, and raised in Seattle, Washington during his youth and adolescent years. He lived with his mother and father in the suburbs of the city. As a teen, he attended a Lakeside Private School. The school was among the first to have the first computers invented available for student access. To no one's surprise, Bill and a few of his friends were the first to take an interest in these new machines. They signed up to visit the computer lab whenever they could get a chance, simply so they could learn more about these great wonders. Bill was always extremely intelligent in school. He became so skilled at computers and how they work, that he was already a skilled programmer at the age of thirteen. However, Bill did see a few problems with computers and the way they worked. During the 197o's, computers were a long way away from what they are now. For one, they were the size of a very large room. They were so immense in size that you could actually walk around inside them. And second, if one small part of these machines broke, the whole machine would shut down. After graduating from Lakeside, Bill was enrolled in Harvard University. While there, he created a programming unit of BASIC for microcomputers. However, shortly afterward he dropped out of Harvard to devote of all his time to computer programming. He went out on a limb and began his own company in 1975 called Microsoft. From then on Bill Gates has invented numerous ways to make the personal computer a great experience for everyone. To this day he remains the richest man on the planet. He is the CEO and chairman of the Microsoft Software Company. I would recommend this book to anyone who is interested in software and technology. It would easily be enjoyed by children ages 9-15. This book was a very interesting read. Even though most biographies come off as boring, this one struck me by surprise. The author does a great job. The book takes the reader through all of the hard work Bill Gates had to endure to get to where he is today. Another reason why I enjoyed this book was because of the author's choice of wording. It made the book more enjoyable to read. Also, the author's usage of details in the story made it more interesting. However, what I didn't like about this book was the fact that it was almost too easy to read. It seemed as though it was meant for an elementary school student. But then again maybe it had to be written that way so that people like me could understand all that computer programming talk. Overall though, this book was a 10. It was interesting, detailed, got to the point, and was easy to understan

Published by Thriftbooks.com User , 20 years ago
[...] but the book was great. It had a lot of interesting info.

A great book for young readers

Published by Thriftbooks.com User , 22 years ago
I enjoyed this book, but would most likely not reccomend it to anyone over the age of ten or eleven. It was interesting but was published in 1997, therefore it is not 100% up to date.

Published by Thriftbooks.com User , 23 years ago
No, It's first time.
Copyright © 2022 Thriftbooks.com Terms of Use | Privacy Policy | Do Not Sell My Personal Information | Accessibility Statement
ThriftBooks® and the ThriftBooks® logo are registered trademarks of Thrift Books Global, LLC