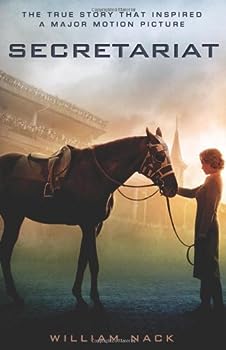 In 1973, Secretariat, the greatest champion in horse-racing history, won the Triple Crown. The only horse to ever grace the covers of "Time, Newsweek," and "Sports Illustrated" in the same week, he... This description may be from another edition of this product.

A Must Buy For Any Serious Horse Racing Fan!

Published by Thriftbooks.com User , 19 years ago
I bought William Nack's original writing of this book which was published in 1975. Although I was too young to follow Secretariat's racing career, reading this book gave me a very detailed and full account of his performance as a two-year old in 1972 and as a three-year old in 1973. I have been a big horse racing fan for some 20 years now, and I have read many books on throughbred racing. This is definitely the best book on the subject that I have ever read!Not only is it an excellent description of Secretariat and all of his connections. It tells the racing fan a lot about what goes into training a horse and bringing him along before he runs his first race. My favorite chapter is the author's narration of the 1973 Belmont Stakes. I never get tired of reading how Secretariat was running down the backstretch so effortlessly while Sham could barely keep up with him. Ron Turcotte didn't realize how fast they were going until he saw the clock near the end of the race. If you love thoroughbred racing you'll certainly love this book. This is quality writing! You'll know Secretariat's career so much better after reading this book. It's too bad that Secretariat never got to race at the age of four. He might have been even better than he was at three. One can only guess what might have been!

Published by Thriftbooks.com User , 20 years ago
A brief and probably pointless quiz: Who is the horse described in the following paragraph?He was a physically awesome Thoroughbred and a superb broodmare sire. When he was born at ten minutes after midnight, March 30, 1970, his owner took one look at him and said, "There is a whopper." His own firstborn was an Appaloosa colt named 'First Secretary'. Another son - a draft horse cross - is still alive and well and recently retired from the Southwest dressage circuit. Yet a third son won the Belmont by a margin of 21 lengths, in what was the second fastest running and third largest margin in history.Of course, his Daddy still holds the record for both margin and time.And who is Risen Star's Daddy?Secretariat, of course. No one who admires this special breed of horse could possibly have flunked this quiz.When we watched Big Red hit the wire 31 lengths ahead of Twice a Prince in 1973, crushing the Belmont stakes record by two seconds and change, many of us knew that we would not see his like again. According to his jockey, Ron Turcotte, Secretariat was retired before he had reached his full potential at the longer distances. We would have loved to watch that big red horse run all day and smash every record there was, but it was not to be.At any rate, reading William Nack's, "Secretariat: The Making of a Champion" is the next best thing to watching him run (unless you are lucky enough and rich enough to own one of his 'blue hen' daughters). At least his fans can relive the races Big Red did run, and Nack has the knack (sorry) of bringing them vividly back to memory. This book and "Wild Ride: The Rise and Tragic Fall of Calumet Farm, Inc., America's Premier Racing Dynasty" by Ann Hagedorn Auerbach are my two favorite reads on all aspects of the Thoroughbred racing industry in the United States. "Secretariat" reflects the brilliance of the Thoroughbred and its human interface. "Wild Ride" reflects the dark side of that same relationship.My only complaint regarding Nack's treatment of Secretariat is that although it starts in the right place (the birth of Somethingroyal's whopping, chestnut foal), it didn't extend much beyond Big Red's last race. I would have liked to follow him through at least part of his career at stud.However, that might be asking too much of a book that was published only two years after this great Thoroughbred retired from the track.At the beginning of the new millennium, Man O'War was voted 'Thoroughbred of the Century' by a panel that was assembled by 'Blood Horse' Magazine. But those of us who saw Secretariat win the Belmont will remember him as first, and (as they said about one of his most famous ancestors) the rest nowhere.

One of the All-Time Best Racing Books

Published by Thriftbooks.com User , 21 years ago
This book was originally published in 1975 as BIG RED OF MEADOW STABLE. I read the book when it first came out, and I thought it was one of the greatest books ever written on thoroughbred racing. I finally bought a copy of my own in 1989, just a couple of months before my visit to see the great horse in Kentucky.Perhaps because I saw Secretariat just weeks before he was put down, this book still brings the tears to my eyes when I read it. It takes a truly outstanding writer to write about such a magnificent subject, and Nack fills the bill beautifully. He traces Secretariat's lineage and of the history of Claiborne Farm in Kentucky, long the leading breeder of thoroughbred race horses. He writes in depth about Secretariat's races leading up to the legendary Triple Crown triumph of 1973. He writes about observers such as Charles Hatton, who spotted Secretariat's greatness immediately and who called Secretariat the greatest horse he had ever seen. The only flaw in this great book is that it stops at Secretariat's retirement. There is no updated edition of this book. Perhaps someday Nack will write the rest of the Secretariat story. He certainly wrote a magnificent obituary about him in Sports Illustrated called "Pure Heart." All in all a great book.

One of the most beautifully written books I've ever read.

Published by Thriftbooks.com User , 22 years ago
This is one of the most beautifully written books I've ever read. Like me, you don't have to be very knowledgeable of the horseracing world--this book will give you a lot of insight in words you'll understand. And it doesn't matter that you already know Secretariat won the Triple Crown--the trip there is an awesome one. You don't just read this book, you become part of it. I laughed, cried, got nervous, got frustrated, felt anticipation, and at times even found myself talking to the people in the book, who you'll get to know as if you've known them all your life. This book is for everyone, whether you're into horseracing or not. It's a story of love, faith, perseverence, patience, and trust. In essence, it is a love story, and I guarantee you'll fall in love also. William Nack has done great justice to Secretariat and the people who were a part of his life.

My heart began to pound as Mr. Nack described what happened!

Published by Thriftbooks.com User , 22 years ago
Mr. Nack has done a wonderful job telling Secretariat's story, and what a story it is. I have allways loved Secretariat, but Mr. Nack has taught me about things such as running a "twelve clip" and changing leading legs in the turns and about lineage and people as well. But beyond that, it's great to read something about Secretariat that reaffirms how so many felt about the greatest horse of all time. I'm glad Mr. Nack loved that horse as so many of us did. He has written it into his book and I couldn't put it down. I wanted to run right out and find more books on Secretariat. Thank you Mr. Nack!
Copyright © 2022 Thriftbooks.com Terms of Use | Privacy Policy | Do Not Sell My Personal Information | Accessibility Statement
ThriftBooks® and the ThriftBooks® logo are registered trademarks of Thrift Books Global, LLC