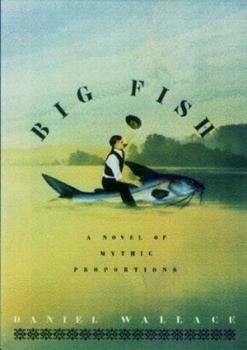 In his prime, Edward Bloom was an extraordinary man. He could outrun anybody. He never missed a day of school. He saved lives and tamed giants. Animals loved him, people loved him, women loved him. He knew more jokes than any man alive. At least that s what he told his son, William. But now Edward Bloom is dying, and William wants desperately to know the truth about his elusive father this indefatigable teller of tall tales before it s too late. So,...

Published by Lourdes , 1 year ago
I fell in love with the film long before I read the book. The film will always hold a special place in my heart. Reading this book awakened that same feeling of wide eyed wonder to the nature of love between a parent and their child that the film captured. Even though the plot is slightly different than what I am familiar with I loved it immensely nonetheless. Such a small book with few words but they are well chosen words that will not fail to move you.

Read Big Fish. It's a completely different fish than the one in the movie

Published by Thriftbooks.com User , 17 years ago
It often happens that after watching a good movie then finding that it was based on a book one becomes discoraged of reading the book behind it because the story was already portrayed in the movie. But 'Big Fish' was such a good movie that reading the novel was necessary. However from the very start of Wallace's novel I realized I was in for a whole new expedition into another Big Fish. John August did an excellent job writing Burton's 'Big Fish' screenplay because the events from the movie are only loosely based on the book (and he really used his imagination to tell new events in an extremely different way). The novel tells different stories from different perspectives. It is really another Big Fish than the one told by August. It is a really magical and extremely original novel: profound, beautiful, funny and real. Read Big Fish. It won't take you long and believe me you won't regret it.

Published by Thriftbooks.com User , 17 years ago
Daniel Wallace's Big Fish is the story of a son coming to grips with the imminent death of his father--a father he loves deeply despite harboring some contempt. Written with the pared-down, straightforward English of Hemingway and the imagination of Dahl, Wallace creates a simple story that pays homage to its setting, the South of a generation or two ago, and does so in the tradition of the Greek myth. But don't be fooled by the book's simplicity. It achieves something special and rare by so accurately showing the imperfections of mankind, our (in)ability to communicate, and our overwhelming desire for resolution and peace before death. I implore you, the interested who has yet to read this novel, to force yourself to read it sl-ow-ly. You have the ability to read it in one sitting. Don't. Read it over the course of several days and absorb the terrific visuals and honesties that will remind you of people you have encountered and emotions that you have felt. It's about a boy who sees his father as a hero, showed to its audience by the tall tales that he heard about his father himself. Intermixed are four different renditions, written in the first person, that tell the story of his father's death, the last one representing the balance or peace that is achieved upon that death. Big Fish is a significant success and I recommend it highly.

Published by Thriftbooks.com User , 18 years ago
If you've heard of this book, it may be because it was recently made into a movie, which critics hailed as this generation's Wizard of Oz. Of course, being the skeptic that I am, I had to read the book first, to see if it truly contained the seed of such wonder. The verdict: oh, yes! This novel, which ambitiously purports itself to be "of mythic proportions," follows the traditional arc of the novel form, telling the life story of one man - Edward Bloom - from birth to death (to rebirth?). Yet it also resembles a collection of episodic short stories, each of which give us a different taste of Bloom. Ultimately, the book is "about" a young man's search to know his father, and the father's desire to know, as he lay dying, that he did a good job. But that description is really far too mundane; this story is funny, magical, and indeed, mythical. It's beautiful, really, and if the movie captures one-tenth of that beauty it's worth my $7.50. Big Fish is easily a weekend book, but just because the pages turn so quickly, don't rush it - this is the most delightful book you will read for a long time, so savor it.

Published by Thriftbooks.com User , 18 years ago
As a lover of myth, folklore and fairytale I was absolutely enchanted by this book. I do believe that storytelling is a direct route to our psyches, especially all of our collective unconscious as humans who share trials and triumphs with each other and forever wonder how we rate as individuals. Daniel Wallace has created an endearing world within a son's imagination of the father he desires to know. As a daughter I can embrace this same longing with both my parents. The beauty of our minds and souls is how we can indeed fill in the negative spaces with dreams and tall tales that somehow do reality and truth justice within the reflection. I loved this book for all it had to share. A lovely read and I recommend it to everyone.

Published by Thriftbooks.com User , 24 years ago
BIG FISH is fantastic. I read it a few weeks ago, and it has totally stayed with me. I can't get it out of my mind, and keep picking it up and start rereading it at random, just to be back in its magical world. It's funny, witty, sad, and in the end incredibly moving. It's about learning to come to terms with your parents, with a son writing about his father as myth, a superhuman who seemed like he would live forever (and in a way, he does), and it's really remarkable that so short and light a book could be so incredibly powerful. BIG FISH should become a classic. Whatever you do, don't miss it.
Trustpilot
Copyright © 2022 Thriftbooks.com Terms of Use | Privacy Policy | Do Not Sell or Share My Personal Information | Accessibility Statement
ThriftBooks® and the ThriftBooks® logo are registered trademarks of Thrift Books Global, LLC