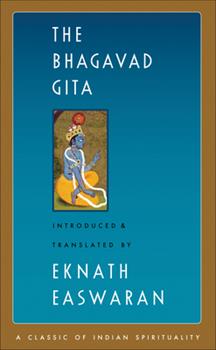 The Bhagavad Gita is the best known of all the Indian scriptures, and Eknath Easwaran's best-selling translation is reliable, readable, and profound. Easwaran's 55-page introduction places the Bhagavad Gita in its historical setting, and brings out the universality and timelessness of its teachings. Chapter introductions clarify key concepts, and notes and a glossary explain Sanskrit terms. Easwaran grew up in the Hindu tradition in India, and learned...

One of the best books in the world.

Published by Thriftbooks.com User , 12 years ago
I cannot judge the translation, but it seems to work. This little Shambala edition is neat.

Published by Thriftbooks.com User , 12 years ago
I have had the Bhaktidevanta Book Trust version of the Bhagavad-Gita for some time. Naturally, there are many books you should keep around if you study Ayurveda and this is one of them. I don't own the entire Mahabharata yet but you can be sure I will at some point. The Bhagavad-Gita is the portion where Arjuna is compelled to go to war and is counseled by Krishna in relation so you gain the wisdom of the book as an observer, just for those that don't know that already. It's a great book.

The esteemed, poetic classic translation in a pocket edition

Published by Thriftbooks.com User , 19 years ago
The "Song Celestial" is Sir Edwin Arnold's beautiful rendering of India's most beloved spiritual text, The Bhagavad Gita, and has been kept in print by the press of Yogananda's Self-Realization Fellowship. This is a convenient, pocket-size hardback that is a joy to read from whenever you have a free moment."The words of Lord Krishna to Arjuna in the Bhagavad Gita are at once a profound scripture on the science of Yoga (union with God) and a textbook for everyday living. The student is led step by step with Arjuna from the mortal consciousness of spiritual doubt and weakheartedness to divine attunement and inner resolve. The timeless and universal message of the Gita is all-encompassing in its expresssion of truth. The Gita teaches man his rightful duty in life, and how to discharge it with the dispassion that avoids pain and nurtures wisdom and success." --Paramahansa Yogananda (from book jacket)Regarding the style of translation, Sir Edwin explains in his preface: "The Sanskrit original is written in the Anushtubh meter, which cannot be successfully reproduced for Western ears. I have therefore cast it into our flexible blank verse, changing into lyrical measures where the text itself similarly breaks. For the most part, I believe the sense to be faithfully preserved..."One definite quibble about the translation is made explicit in Yogananda's autobiography where he notes that virtually *every* translator of The Gita into English mistakes Krishna as instructing his disciples to meditate with the gaze focused on "the tip of the nose." Yogananda points out that the Sanskrit "nasikagam" actually means "source" or "root" of the nose -- a reference to *the point between the eyebrows* - the "spiritual eye". For an esoterically sophisticated appreciation of such subtle (but vital) translation issues, you may want to turn to Yogananda's illumined commentary on the Gita: "God Talks with Arjuna." (ISBN: 0876120303 )

One of the more attractive versions for the general reader.

Published by Thriftbooks.com User , 20 years ago
Juan Mascaro's edition of the Gita is undoubtedly one of the more attractive versions for the general reader who is approaching the Gita for the first time. Mascaro, besides being a Sanskrit scholar, is a sensitive translator who clearly resonates to the Gita. He tells us that the aim of his translation is "to give, without notes or commentary, the spiritual message of the Bhagavad Gita in pure English." To suggest just how well he has succeeded, here is his rendering of Verse II.66:"There is no wisdom for a man without harmony, and without harmony there is no contemplation. Without contemplation there cannot be peace, and without peace can there be joy?"Many readers will probably be content to remain with Mascaro, and it certainly seems to me that his translation reads beautifully and that a fair number of his verses have never been bettered by others. But the Gita is not quite so simple as it may sometimes appear. If we want to arrive at a fuller idea of just what the Gita means by "wisdom," "harmony," "contemplation," "peace," and so on, we will need to consult other and fuller editions.There are many editions which, besides giving a translation of the Gita, also give a full commentary such as the excellent one by Sri Aurobindo in his 'Bhagavad Gita and Its Message' (1995). Others, besides giving a commentary and notes, also give the Sanskrit text along with a word-by-word translation. Some of these even include the commentary of the great Indian philosopher, Shankara (c. + 788 to 820), such as the very fine edition by Swami Gambhirananda (Calcutta: Advaita Ashrama, 1995, which may be available through the Vedanta Press, CA). Here is the latter's English rendering of Verse II.66:"For the unsteady there is no wisdom, and there is no meditation for the unsteady man. And for an unmeditative man there is no peace. How can there be happiness for one without peace?"This may not seem to have carried us much beyond Mascaro until we start looking at Shankara's commentary, of which the following provides a taste:"Ayuktasya, for the unsteady, for one who does not have a concentrated mind; na asti, there is no, i.e. there does not arise; buddhih, wisdom, with regard to the nature of the Self; ca, and; there is no bhavana, meditation, earnest longing for the knowledge of the Self; ayuktasya, for an unsteady man. And similarly, abhavayatah, for an unmeditative man, who does not ardently desire the knowledge of the Self; there is no shantih, peace, restraint of the senses. Kutah, how can there be; sukham, happiness; ashantasya, for one without peace? That indeed is happiness which consists in the freedom of the senses from the thirst for enjoyment of objects; not the thirst for objects - that is misery to be sure. The implication is that, so long as thirst persists, there is no possibility of even an iota of happiness!" (page 112-3).For anyone who would like to see a full treatment of the language of the Sanskrit text, there is Winthrop Sarg

Most lyrical translation into English of this classic

Published by Thriftbooks.com User , 23 years ago
Isherwood took his love of the message of the Gita, and the knowledge he gained from his Teacher to bring the wonderful meaning of the Bhagavad Gita into beautiful English.This work of faith and philosophy gains so much from the beautiful use of words! Other translations may be more accurate of more satisfying to scholars, but this is the one for the reader who wants to understand this message.
Copyright © 2020 Thriftbooks.com Terms of Use | Privacy Policy | Do Not Sell My Personal Information | Accessibility Statement
ThriftBooks® and the ThriftBooks® logo are registered trademarks of Thrift Books Global, LLC