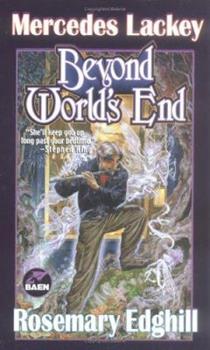 (Book #4 in the Bedlam Bard Series)

Beyond World's End This description may be from another edition of this product.

Published by Thriftbooks.com User , 18 years ago
BEYOND WORLD'S END isn't exactly your normal urban fantasy. For one, instead of a coming of age tale, we have a "how am I supposed to fit in?" tale instead. And the minions of evil are more earthly, and evil; in short, they're drug lords, sane, in control of themselves -- and all the more vile for that.But maybe I'm getting ahead of myself.Protagonist Eric Banyon, flutist and Bard, has returned to the World Above to resume his collegiate career at Juilliard. His former lovers, Beth and Korendil the Elf (Kory for short), have definitely paired off, and he's somewhat at loose ends.But not for long.He returns to school, meets a gargoyle named Greystone, and becomes friends with him. And through Greystone, he meets the four Watchers living in his apartment building; four individuals pledged to right wrongs other people don't see, mainly because they have the power to do so and the willingness to lay it all on the line for what they believe is right.At any rate, Eric finds that evil is stalking the poorest and lowest of the citizens of New York -- people no one else seems to care about. Even Ria Llewelyn, erstwhile love interest (and recently healed corporate half-Elven shark), doesn't seem to care about what's happening.But Eric cares, and he can't just let it lie. He has to do something.But what?What he does, and how he does it, I'll leave you to find out. But I will say that I found it a wonderful adventure with unusual depth and breadth, and it set up SPIRITS WHITE AS LIGHTNING quite nicely in the process.I like this story better because it's based on self sufficiency; simply put, a big part of the story is Eric learning to accept himself and his magic. That's a message that you just don't see much in fiction; most male heroes are Hell-bent on finding a female (or, in some cases, male) lover just as soon as possible, to block out the dreadful loneliness.In other words, self-actualization is a non-starter ninety-nine percent of the time.But not here. Despite his initial feelings of loneliness, Eric learns to see his life as interesting and challenging instead. And that attitude makes this book more realistic, not less, because it's what a mature man would be more likely to do (I mean, let's face it, 28 year old men just don't moon over girls all day and all night if they're even halfway normal). And his growing acceptance of himself and his craft allowed me as a reader to enjoy the atmosphere of a pre-9/11 New York City and be swept away by the highlights (and lowlights) of living there.It's something I never thought I'd see happen, much less convincingly, but Ms. Lackey and Ms. Edghill really pulled it off well.The only drawback (and it's minor) in this work is that there is a lot of room, years even, between SUMMONED TO TOURNEY and BEYOND WORLD'S END. Why the marked demarcation?Granted, the changes made (Eric's growing maturity, Beth and Kory being only friends now) made sense to me, mainly because I've never seen a stable threesome i

Published by Thriftbooks.com User , 20 years ago
I read it in one sitting. I couldn't put it down. Everything hangs together well. Nothing is contrived, every scene follows logical sequence. Very good story.

Published by Thriftbooks.com User , 20 years ago
While Beyond World's End is a sequel to Bedlam's Bard, familiarity with its predecessor is not required in order to thoroughly enjoy this as a stand-alone story. Magician Eric is hoping to settle down peacefully in the earth realm - but his apartment turns out to be a haven for occultists, and an attractor of evil forces which involves Eric in yet another struggle. Gripping and unpredictable action.

Impossible for Elves to be in New York - or is it?

Published by Thriftbooks.com User , 21 years ago
I spent a good part of my Saturday reading this entire book - in one sitting! After a gentle start, where you get the idea that Baird Eric Banyon may have finally grown up, the action really picks up. Eric feels he must face his past, and his relationship with Beth and Kory has changed since Bedlam's Baird so he's in New York to confront some of that past, meeting interesting "guardians", and upsetting the plans of some very nasty people and elves. I did miss the romance of Bedlam's Baird, but there is certainly potential for that in a sequel - which looks to be likely. Thanks to Mercedes Lackey who is always a wonderful writer, in my opinion, and Rosemary Edghill for a terrific read.

Published by Thriftbooks.com User , 21 years ago
Let's hear it for Eric Banyon. He's gone from co-dependent to wonderfully mature. He's learning how to cope without his sidekicks and has revealed that he has gotten a wee bit more from the sidhe than good bardsmanship. He's back in New York, re-entering Julliard and finishing his degree. Eric's new apartment building is fun with a roving security system that loves to watch classic movies during the wee hours in Eric's apartmnet. The Guardians that we heard about in the Diana Tregard mysteries are back and just as eclectic. There is Bardic uncontrolled magic that can be injected with deadly consequences. The Wild Ride, bargains with unsavory sidhe, and stangely enough, Ria Lewellyn really helps Eric when he needs it. A great read! I read the book in one day, I couldn't put it down.
Trustpilot
Copyright © 2022 Thriftbooks.com Terms of Use | Privacy Policy | Do Not Sell My Personal Information | Accessibility Statement
ThriftBooks® and the ThriftBooks® logo are registered trademarks of Thrift Books Global, LLC