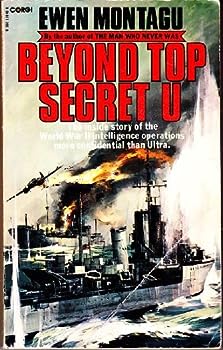 Beyond Top Secret U

"Few fictional spy thrillers are as gripping as Ewen Montagu's account of real-life British Intelligence operations during World War II." Sunday Express "My recollections of 'The War to End Wars' had... This description may be from another edition of this product.

Published by Thriftbooks.com User , 15 years ago
Ewen Montagu's "Beyond Top Secret U" is a brief but charming and highly informative memoir of his service at the very heart of the Allied Intelligence effort against Nazi Germany during the Second World War. The best known highlight of his career was the planning of Operation Mincemeat - dramatized in the book and movie "The Man Who Never Was," and included as a chapter in this book. Montagu, a British lawyer and yachtsman, voluntered for the Royal Navy at the outbreak of war and almost by chance was assigned to intelligence duties ashore. Montagu turned out to have a gift for intelligence work and was eventually assigned to a unique position on the staff of the Director of Naval Intelligence. Montagu was one of only a handful of officers who were privileged to view the decoded "Ultra" intercepts of German signals and to manage the justly famous "double-cross" system whereby captured German agents in Britain were doubled against their German spymasters. The heart of Montagu's wartime job was to manipulate German perceptions about the British war effort through the provision of misleading information via the doubled agents. This job required the careful tracking of the real and notional lives and access of the agents and the careful cross-correlation of their information to avoid giving away either too much accurate information or the doubled status of the German network inside Britain. Montagu's narrative is wonderfully informative and spiced with a wry understated wit, not least at his own challenges in learning the ways of the military and the spying business on the job. It also provides a very useful primer on the difficulties of complicated intelligence operations designed to decieve and influence an enemy. As wartime intercepts and a post-war examination of German records revealed, Montagu and his colleagues were wildly successful. This book is highly recommended to fans of the intelligence business and to students of the Second World War.
Copyright © 2022 Thriftbooks.com Terms of Use | Privacy Policy | Do Not Sell My Personal Information | Accessibility Statement
ThriftBooks® and the ThriftBooks® logo are registered trademarks of Thrift Books Global, LLC