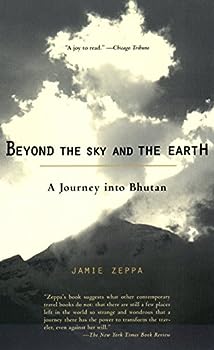 Beyond the Sky and the Earth: A Journey into Bhutan

Jamie Zeppa was 24 when she left a stagnant life at home and signed a contract to teach for two years in the Buddhist hermit kingdom of Bhutan. Much more than just a travel memoir, Beyond the Sky and... This description may be from another edition of this product.

An affecting meditation on solitude

Published by Thriftbooks.com User , 14 years ago
Dorothea May is a 70-year old widow living in an Edwardian mansion block in London. She enjoys living alone and her social life is limited to her former husband's cousins Kitty and Molly. She enjoys silence because she knows that the end of her life is approaching. She is shy of affectionate gestures and enjoys fiction and radio more than the company of people because no response is called for. She often recalls how she met her husband Henry and she doesn't seek joy anymore, settling instead for reasonable satisfaction. Her girlhood was innocent of sexual involvement, like that of a Victorian maiden. One day Kitty announces that her granddaughter Ann is to come to London to marry David. They're both coming with a friend, Steve Best, and it is Kitty's whish that Mrs May puts Steve up in her flat for a week. At first Mrs May refuses but then. The ensuing few days she spends with her lodger will change Mr May's life considerably. In this remarkable novel, the author shows that if the gregarious fear loneliness, to the solitary the gregarious pose a much greater threat. She also shows that a young man's objections to the old are likely to be predominantly physical as well as moral.

Published by Thriftbooks.com User , 19 years ago
I just finished reading this book, and thought it was wonderful! It was especially good to read because I just recently moved to Romania and am going through some of the same experiences that the author discribed. Culture shock, language, trying to teach students without the words to communicate with them (I haven't had anyone tell me that their birthday is "It is rice and pork," yet [p. 43], but I could definitely relate to that story!), all of these are common struggles in a new land.One of the best parts of the book for me was the way the author managed to combine a description of the history of Bhutan and her own personal experiences. I love reading history and culture books, but reading about history by experiencing it through someone else's eyes made it all come alive again. I loved how Zeppa brings the reader slowly through ever-spiraling circles deeper and deeper into the culture. The way she carefully described her arrival in the country, her original culture shock and despair, and the gradual love she gained for her new people are very well-crafted. It gives the reader the chance to experience the same gradual love of Bhutan, its culture, people, and landscape. She also managed to do so with a good sense of humor, laughing about things such as rats having a Rat Olympics while she was trying to sleep, or the reverse culture shock of having sliced bread after so many months in what originally seemed to her to be extremely spartan living conditions. I've read many travel books and memoirs, but I have to say that this is one of my all-time favorites.I also appreciated the author's honesty, both about the good and the bad decisions she made and things she experienced. Here I have to take issue with some of the other reviewers. In fact, I have to wonder if they've ever lived in a country besides their native land (as well as wondering how they would fare with the Rat Olympics, lack of electricity, unfamiliar food, and lack of connection to their first native land). I found Zeppa's description of culture shock to be extremely accurate. As humans we have the built-in characteristic of believing on a certain fundamental level that the way we know things is "right". Living in other cultures can change that to a certain degree, but it never goes away. Some days (especially in the beginning) you wonder why you ever decided to come to this stupid country and when the next plane home is. Other days you love this wonderful new country, can't believe you ever lived anywhere else, and can't imagine why anyone would ever live life differently than people do in your new home. Most days are somewhere in-between. Through a great deal of work you can try to view both your old and new cultures objectively, but this is very hard. I felt that Zeppa did an amazing job with this; she was definitely not perfect, but she wrestled with her decisions before making them and remained constantly open to new ideas and interpretations of what she saw, which is more than m

Published by Thriftbooks.com User , 20 years ago
I can say that this book is utterly honest because I was Jamie's student for two years in Bhutan (in the college). She brings out the facts without fabrication and when I read her, I can relive my experience and my adolescence even though I cannot go back.Th Situation that Jamie talks about, for em, forms the cornerstone of the book because the situation has transformed the lives of so many Jamie knew. It was somewhat disappointing that she did not talk about it in detail but it was impossible to do so. If she had, we would not have had this book, probably. May be Jamie should come out with another book that tells the story of the people she knew while this book has told of her own experience.Jamie, wherever you are, thanks for being honest and not taking sides while painting life as it was in Bhutan and letting so many special people and special cultural aspects live in your book. You have preserved the Bhutan that was in your book...unfortunately it no longer exists even though the government and western visitors pretend that it does. Please Keep writing.

One of my favorite books!

Published by Thriftbooks.com User , 21 years ago
I purchased this book without knowing what it was going to be about, and it turned out to be one of the best books I've read. Since I know nothing about Bhutan, I found the author's descriptions fascinating and imaginative. Without knowing anything about the culture or the area, I found that I could picture both the landscape and the people of Bhutan. It is more of a personal story about a young woman's travel into an unfamiliar area and the challenges she faces along the way, in terms of her own cultural background, values, and beliefs, than a story about the Bhutan itself. A friend of mine was in the Peace Corp and until about a year ago lived on a remote island in Micronesia. While I wrote to her often, it was hard for me to really understand what it would be like to live in a culture so different from one's own. Her correspondence revealed changing attitudes about the culture she was now a part of, her own cultural background, and the way she viewed herself. While reading this book, I felt I could better understand the feelings and attitudes my friend wrote to me about from Micronesia. I think this book would be very helpful for anyone with friends or family living or working in similar situations. I would think it would also interest people who are living overseas submersed in another culture.As someone who has never lived or spent a great deal of time outside the United States, I felt that I could identify with the author. I appreciated her honesty and ability to convey her feelings and emotions, as well as effectively describe a place totally unfamiliar to me. I would suggest it to anyone!

One of her Best--and I've Read Them All!

Published by Thriftbooks.com User , 22 years ago
An editor of mine once said to me that he didn't think a wholelot happened in an Anita Brookner novel. "It's like somebody takes a painting off the wall and contemplates the patch of wallpaper that hasn't faded. That's the book."He was right--and he was very wrong.Lives in Brookner's novels almost always follow the same arc as that wallpaper--from bright possibility to faded reality, and her characters are struck by the contrast of hopeful past and dim present. That is, the characters she most sympathizes with. Because in Brookner's world, there are the quiet, compliant, resigned types (who sometimes long to be bolder), and then there are brash heedless people who like FitzGerald's Daisy and Tom Buchanan smash things and people because they don't care what others think.The painful and sometimes humiliating interaction of these two types is the source of the drama. Brookner's often compared to Henry James, and like James, she posits that adventures of consciousness, travels of the mind and heart, are as strange and threatening as any other trips we might make.Brookner's newest novel, her seventeenth, is a gloriously moving example of her insight into this paradox, written as always in witty and crystalline prose, and with her usual poetic psychological precision. Dorothea May grew up very quietly in a London suburb, and it shaped her values: "One ate plain food, was careful not to give offence, and stayed at home until one married." This outwardly sedate spinster's life--in which trips to Europe were as uneventful as trips to the library--was interrupted by an accidental meeting that lead to a happy fifteen-year marriage. But when her husband Henry died, Dorothea slipped back into the silence and virtual isolation she had been so accustomed to. While she had dearly loved her husband, when she at last got rid of his things, she "felt a sort of elation on realizing that in the future she would not be disturbed."Well-off at seventy, in reasonably good health, but fighting recognition of her body's growing frailty, she's also profoundly aware of "approaching the end of life, and that silence was appropriate." Brookner captures the sustaining rituals of Dorothea's narrowed life with heartbreaking and at times comic accuracy. While her own family is gone, she does have rich in-laws left, and doesn't really mind providing them with a conversational "diversion" due to her perceived oddness.These same in-laws--careful to phone her every week to check on her health, but never coming much closer--disrupt the reverie-filled life she's sunken into. Her sister-in-law's granddaughter has decided to come back to London from Massachusetts to get married, and Dorothea is pressured to offer her hospitality to the best man. The idea of a stranger in her home is appalling, but Dorothea can't say no to this surprising request.Until now, she has been "moving through her shadowy rooms undisturbed, as though she were her own ghost." But the presence of a housegu
Trustpilot
Copyright © 2022 Thriftbooks.com Terms of Use | Privacy Policy | Do Not Sell or Share My Personal Information | Accessibility Statement
ThriftBooks® and the ThriftBooks® logo are registered trademarks of Thrift Books Global, LLC