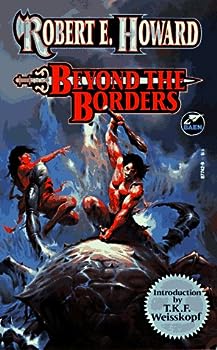 (Book #7 in the The Robert E. Howard Library Series)

This description may be from another edition of this product. Heroes in the mold of Conan venture beyond the borders of our safe world, finding unearthly horrors and unforgettable adventure.

Published by Thriftbooks.com User , 18 years ago
this is a great collection of horror stories. perhaps not particularly well invented or original, but excellently written, good descriptions of the primal fear in man, great descriptions, and the suspence never lacking.

Published by Thriftbooks.com User , 20 years ago
Most of the tales in this volume are in 1st-person; however, the reader would do well to remember that sometimes stories may chronicle a *deceased* narrator. For one thing, the style I refer to as "flashback/present" involves a present-day narrator who, in the midst of the present-day story, recalls a dramatic story of a past life, which (while complete in itself, as a story) fills in background for the present story. Some stories end in tragedy, some in triumph - and others in both.Please take time to appreciate sly Lovecraft references, e.g. "the Necronomicon in the original Greek translation" (as opposed to the Latin translation). Lovecraft and Howard are described in GURPS Who's Who 1 & 2 (respectively), including their long-distance friendship, if you're interested."The Voice of El-Lil" - The narrator meets a man who once found the lost city of Eridu - founded by refugees from the fall of Old Eridu in Sumeria, 4000 years ago. He still can't bear the sound of gongs, which bring back the memory of the temple of El-Lil."The Cairn on the Headland" - Style: 1st-person flashback/present, where the flashback is one of Howard's takes on Clontarf, the battle that ended the Dark Ages by breaking the back of the sea-rovers. Why was a great cairn raised on the battle-plain, when the rovers couldn't stay to bury their dead? And why, ever after, was it worth a man's life to carry holly within a mile of Grimmin's Headland?"Casonetto's Last Song" - Casonetto, the great tenor, ordered the destruction of all his recordings before his execution - save one, which he arranged to have mailed to the narrator, who exposed his murderous cult to the authorities. What song has he sent to the man responsible for his death?"The Cobra in the Dream", "The Dream Snake" - These stories, while different, each have at their core a poor devil tormented by a recurring nightmare, in which a snake comes closer and closer to killing him with each repetition of the dream. In the end, the victim fears that his next dream will bring his death - so that he at last confides in the narrator (a different person in each story)."Dig Me No Grave" - "...I shall need none." Such were the final words of the will of John Grimlan, which he handed to Conrad, his executor, with instructions for Conrad to carry out even if Grimlan later weakened and tried to countermand his orders. Now Conrad has asked Kirowan (in his first appearance, and who is narrating) to accompany him as he carries out Grimlan's request."The Haunter of the Ring" - Evelyn Gordon's ex-suitor finally sent a belated wedding present - and now she's tried 3 times to kill her husband, with no memory of doing so. Not that there could be any connection..."Dermod's Bane" - Kirowan, the narrator, was advised to seek out Galway, in the hope that the salt sea or Ireland itself might ease his grief at his sister's death. To this day, the great tree known as Dermod's Bane marks the spot where his ancestor killed his great enemy..."King of

Published by Thriftbooks.com User , 20 years ago
If you like the Indiana Jones films - as most people in the planet did - this is a book for you. I'm inclined to believe that Robert E. Howard, along with other pulp writers, are the inspiration for many films of decades later, up to this day... This book is a collection of such influences: adventure in the wilderness; quests for old tombs in eerie places; ancient horrors reborn; and tough guys - plenty of them, ready to punch, smite and shoot their ways through hordes of mean enemies. On a side note, when you pick this book, try ignoring the fact that it's filled with racist undertones. If you leave that aside, I believe you'll have great fun. For this book has the essence of adventure.

Published by Thriftbooks.com User , 23 years ago
This collection of short stories by the late Robert E. Howard contains much of his lesser known efforts. While most Howard tales do feature a hero cast from a standard mold, these stories do not really contain the sword and sorcery "Conan" figures, as has been advertised elsewhere. The heroes in these tales are much more akin to "Indiana Jones" than to Conan of Cimmeria. The tales appear to be set in the 1920's and 30's (modern time for Howard) and star wandering adventurers of the archaeologist type. There are a couple run of the mill tales, but by and large most every story has the "Weird Tales" essence of action and bizarreness as well as the magical Howard prose. Highly enjoyable. I wish fiction like this was still being written and published today.
Copyright © 2020 Thriftbooks.com Terms of Use | Privacy Policy | Do Not Sell My Personal Information | Accessibility Statement
ThriftBooks® and the ThriftBooks® logo are registered trademarks of Thrift Books Global, LLC