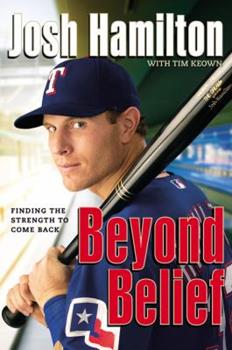 Beyond Belief: Finding the Strength to Come Back

Hamilton, first overall pick in the 1999 baseball draft, seemed destined for superstardom until a four-year nightmare of drugs and alcohol addiction derailed his career. While chronicling those tragic events, this book is ultimately a story of redemption and triumph. (Motivation)

Published by Thriftbooks.com User , 13 years ago
Beyond Belief: The Josh Hamilton Story I had never heard of Josh Hamilton until the Home Run Derby last year. His massive swings of the bat hit a record number of baseballs of the fence and the name Josh Hamilton found its way into the homes of baseball fans across the country! Even though the Home Run Derby set Josh Hamilton apart, there is a better story behind the man. Beyond Belief is a thrilling story of a man seeking to find peace and grace in the eyes of God. His journey from a highly touted High School baseball prospect to a drugged out- tattooed-trouble soul is clearly projected in the words of Josh Hamilton. Even the places and people are brought to life through the story of Mr. Hamilton's rise and fall then his rise again. Josh Hamilton could be called the "Prodigal Son" of baseball. His life as headed for the Hall of Fame in Springfield, Mi, until a fateful day when he allowed the troubles of the world to infect his life. His parents struggled with their child as they saw his troubles and his bank account quickly dwindling because of addiction. His wife struggled through the years, but she kept hope in this North Carolina baseball star. Young children had looked up to him, his drug habits caused young people to read his suspensions, and slowly his name was fading from the books. One day, his life was going to change. The ways and ideals he had grown up believing were coming back...but how long would it take? His family was behind him and his wife was praying...then the day came! The crack of the bat felt the way it used to and the story was changing. He looked at his wife, saw her face and he knew he was back! Josh Hamilton's story is an amazing one and every year it seems to get better. His life is becoming whole with the grace of God and he is still seeking the presence of the Savior. Beyond Belief is an excellent book for baseball fans and anyone who has a passing interest in reading true stories of the possible! Take a moment and enjoy the story of Josh Hamilton. When you are done you will say, "Yes, it is Beyond Belief." A special thanks to Faith Words for allowing me to have a copy of this book. Also thanks to my brother Aaron, who stood hours in a line at Barnes and Noble to meet Josh Hamilton and get my book signed.

Published by Thriftbooks.com User , 13 years ago
Although reading what Josh went through (and put his family through) can be tough to take at times, this was a very good read and quite inspiring. I've read a number of faith-based memoirs written by athletes and others lately and this was the best. I'm certainly rooting for Josh to stay clean and excel at what he does so well (although he can take it easy against the Indians).

Amazing Story from an Amazing Man

Published by Thriftbooks.com User , 13 years ago
Incredible story that I could not stop reading. This book will be an inspiration to anyone who picks it up. Josh is a rare commodity in baseball, not just because he has "Mickey Mantle talent," but also because he is not afraid to put himself out there for all the world to see and judge. Hopefully there will be people who read this book and realize that if Josh can fight his way back from the hell he lived, they can too, or even better...maybe by reading this book the reader will learn from Josh's mistakes without making the same ones he made.

Published by Thriftbooks.com User , 13 years ago
This was a fabulous book that I had a hard time putting down. I knew most of the story, from magazine articles, but I had missed the religious component of the tale. I could even recommend this to a men's bible study. It was awful that so many people misunderstood the relationship between Josh and his parents. How numerous rehabs could blame his parents for Josh's addiction amazed me. He was and is a prodigy. That was a big part of his problem. No one seemed to realize that and MLB wanted him to fit into a cookie cutter experience. He couldn't do that.

Published by Thriftbooks.com User , 13 years ago
I just finished reading "Beyond Belief: Finding the Strength to Come Back." Now, I know what you're probably thinking here; and, it's "How can someone who is just 27-years old author their biography?" Or, [if you know me] maybe it's "Aren't you a little old to be reading baseball `puff piece' books?" Then again, maybe you're thinking both of these things? Well, let me tell you..."Beyond Belief" may only cover the first 27 years of Hamilton's life. However, there's a very interesting story to tell within those first 27 years. And, trust me, this book is far from being a `puff piece.' As I was reading Hamilton's story, all I could think about was "Wow. This is `The Natural' - just like the movie. Except, as entertaining as that movie was, the story seemed too far-fetched to be true...and, now, here's the same story...and it's all true!" First, some background on Hamilton. When he was six-years old, Josh was playing on youth baseball teams for boys between the ages of eleven and twelve. Picture that...a 6-year old playing against 12-year olds. And, regardless of that age gap, he was one of the best players on the field during the games. Hamilton's talent, even at that young age, was off-the-charts. And, Josh Hamilton's talent never fell back to the pack. Related, he was the first overall pick in Major League Baseball's 1999 Amateur Player Draft - at the age of 18. At that time, Josh was considered as being as good as Alex Rodriguez was at the same age. However, in 2001, when he was just 20-years old, Hamilton - who, up until this time, was a squeaky-clean All-American boy in an Opie Taylor type way - started abusing alcohol and using illegal drugs. And, his habits became so bad that he became low-life crack addict...hitting absolute rock-bottom. In the process, he nearly destroyed the lives of several loving family members and threw away millions of dollars. And, we're not talking about a blip on the radar here. Josh Hamilton's slide towards destruction was a five year journey through hell. During this time, he went through eight different drug treatment and rehabiliation centers. We've seen stories like this in baseball before...names like Rod Scurry, Steve Howe and Ken Caminiti come to mind...and many times they have ended in tragedy. Yet, through his faith, Hamilton was able to gain control of his life...and get back into baseball as a 25-year old (in 2006) and bring his career to the point where he was the highlight of the Homerun Derby at the 2008 big league All-Star Game. But, forget the baseball-side of the Josh Hamiliton story. And, just focus on the "person" angle here...as that's what's so riveting when you're reading "Beyond Belief: Finding the Strength to Come Back." This book tells the story of a great talent - perhaps one of the greatest talents ever - falling so low, and out of control, to where the talent is wasted and its host becomes one of the dregs of society. And, once at the bottom, there are years of struggle to be
Trustpilot
Copyright © 2022 Thriftbooks.com Terms of Use | Privacy Policy | Do Not Sell or Share My Personal Information | Accessibility Statement
ThriftBooks® and the ThriftBooks® logo are registered trademarks of Thrift Books Global, LLC