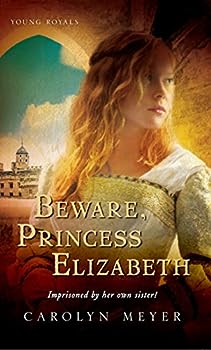 (Book #2 in the Young Royals Series)

This description may be from another edition of this product. Imprisonment. Betrayal. Lost love. Murder. What more must a princess endure? Elizabeth Tudor's teenage and young adult years during the turbulent reigns of Edward and then Mary Tudor are hardly those...

Published by Sarah , 1 year ago
I ordered this book with a certain cover and it was swapped out to a different cover. The ISBN number may be the same but the book covers weren’t. I wouldn’t have ordered the book I got.

Published by Thriftbooks.com User , 20 years ago
Beware, Princess Elizabeth is an excellent book! Carolyn Meyer writes wonderful historical fiction and I couldn't put this book down. I have read Mary, Bloody Mary also and it is a great book as well. But my mind always comes back to the same question: Mary or Elizabeth? Which one is the greater, better sister? Was Mary really as horrible as Elizabeth made her out to be? In all I've read of this time period I've always liked Elizabeth better. But in Mary, Bloody Mary, Mary seems almost...kind. She went through a lot to come to the conclusion that she would never like Elizabeth. I think that Mary wasn't horrible when she was a young girl and a young lady as shown in Mary,Bloody Mary but that her hatred of Elizabeth and her horrid treatment of Protestants was a developed characteristic. I believe that I will always like Elizabeth more. However, I feel that one should read each book and come to ones own conclusion of this question: Mary or Elizabeth?

You' ve heard Mary's story, what about Elizabeth?

Published by Thriftbooks.com User , 20 years ago
If you have read Bloody Mary you would have learned why Mary was Elizabeth's enemy. You would have learned of how much Mary was tormented by Anne Boleyn and how because of her, Mary's mother was cast away. What of Elizabeth? The accident and now only remnant remaining of Anne Boleyn? Elizabeth's life story is no better than Mary's. In this book you see how Elizabeth could never trust hardly anyone and her tiny limit of friends such as her governess, Kat Ashley. You see how strong Elizabeth had to remain, to see her sister pursue her with so much hate and remorse. You hear of what made Elizabeth never want to marry. This is an excellent book and if you have read The Royal Diary of Elizabeth then you would see that both books are spectacular. However in the Royal Diary their is less peril and horror as in this book because Elizabeth was younger. It's safe enough to say that Elizabeth suffered more as she became older. Elizabeth endured much and this book takes many gloomy turns as Bloody Mary did. Cheers for Meyer on her excellent job!

Published by Thriftbooks.com User , 20 years ago
This is another wonderful book by Carolyn Meyer. Princess Elizabeth (the future Queen Elizabeth the First) is the only surviving child of Henry VIII and his second out of six wives, Anne Boleyn. This book chronicles the years after her father's death. Elizabeth is third in line to the crown according to the Line of Succesion in her father's will, which leaves her a slim chance of ever becoming Queen. But, the Line of Succession eventually is changed. Elizabeth overcomes many obstacles and dangers in this book most of them are due to her older half-sister and arch enemy, Queen Mary. However, Elizabeth's intellingence, ambition and determination prove to be supreme and she overcomes all odds. This book does a wonderful job of bringing this exceptional and dramatic story to life.

Published by Thriftbooks.com User , 20 years ago
Spies everywhere, potential poisoning, being sent to rot in the tower, a Queen who's sure not to put you on the throne as a sister; that's the life of Princess Elizabeth for you. Taking place right after the death of King Henry VII Beware, Princess Elizabeth tells the tale of how Elizabeth, Princess of Wales, survived the rein of not only her brother, whom she loved dearly, but the infamous rein of her sister, Princess Mary Tudor. Told by Princess Elizabeth herself, she tells you of how she lived day to day life in the royal court and what she thinks of the dukes, earls, and princes whom King Philip II, Queen Mary's husband, tries to marry them off to her. Being as steadfast as Elizabeth is on not marrying, she refuses all proposals and lives in fear of what the King and Queen, especially the Queen, might say or do about her defiance. Having every one she loves either dead or taken away by the order of the Queen, Elizabeth feels totally and utterly alone. How will she survive this horrible torture and still hope to become Queen of England? Find out in the wonderful book entitled Beware, Princess Elizabeth and enjoy!My personal opinion of the book was that it was quite entertaining. I do admit that it did have some parts where it was a little long-winded but those parts were few. For the most part I gave the book 5 whole stars for its great development of the characters and making history come alive and enjoyable to read.

A fascinating portrayal of the young Princess Elizabeth.

Published by Thriftbooks.com User , 20 years ago
As the daughter of King Henry the VIII and Anne Boleyn, the wife he had executed on false charges of adultery simply because she did not birth him a son, the young Princess Elizabeth was at various times pampered, scorned, or simply ignored by her father. She and her young half-brother Edward, the heir to the throne, were close. But Elizabeth and her half-sister Mary - daughter of the woman Henry divorced to marry Anne Boleyn - were barely civil to each other. Mary hated Elizabeth simply for her mother's identity. When the King dies and Edward is crowned, the two sisters manage an uneasy peace - until Edward dies and Mary becomes Queen. Now Elizabeth is in grave danger. There are many reasons her sister could want her out of the way. Elizabeth will need all of her wits if she is to survive the dangers of her sister's reign so that someday she can become Queen of England. This was a fascinating portrait of Elizabeth as a teenager and young woman. I highly reccomend this book.
Copyright © 2020 Thriftbooks.com Terms of Use | Privacy Policy | Do Not Sell My Personal Information | Accessibility Statement
ThriftBooks® and the ThriftBooks® logo are registered trademarks of Thrift Books Global, LLC