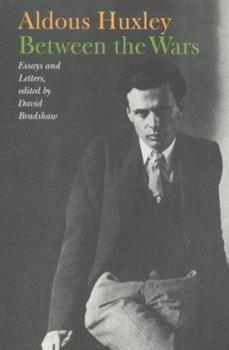 Aldous Huxley - Between the Wars: Essays and Letters

Aldous Huxley had left England by 1923 and was living a balmy exile in Florence, Paris, and the Cote d'Azur. Already a literary success at home, his image--from today's vantage point--was that of an aloof and detached highbrow whose sole concern was to satirize the emotional and intellectual failings of British life. Yet as these newly published letters and essays show, Huxley was drawn to the social and political upheavals of this period between...

Published by Thriftbooks.com User , 22 years ago
Certainly, Aldous Huxley believed in the rule of elites and had anti-democratic notions -- for a period of time. In these essays and letters it is a troubled Huxley that can't fathom the solutions to the social problems of his time that can be observed. He went through many changes and was greatly influenced in thought by ocurrances which he had to live through. This is a pivotal point to understading Huxley which has been overlooked as a consequence of the "claims" that his greatest novels are a few that only reflect one period of his life (e.g. Brave New World). Must read! Redeems Huxley as a thinker with great love and concern for masses.
Copyright © 2020 Thriftbooks.com Terms of Use | Privacy Policy | Do Not Sell My Personal Information | Accessibility Statement
ThriftBooks® and the ThriftBooks® logo are registered trademarks of Thrift Books Global, LLC