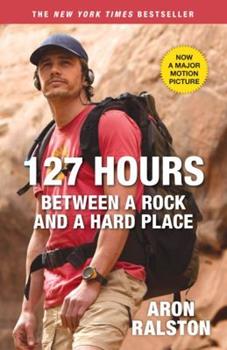 127 Hours: Between a Rock and a Hard Place

The international bestseller Between a Rock and a Hard Place is now a major motion picture starring James Franco. Hiking into the remote Utah canyonlands, Aron Ralston felt perfectly at home in the beauty of the natural world. Then, at 2:41 P.M., eight miles from his truck, in a deep and narrow slot canyon, an eight-hundred-pound boulder tumbled loose, pinning Aron's right hand and wrist against the canyon wall. Through six days of hell, with scant...

Past meets the Present.

Published by Thriftbooks.com User , 16 years ago
This book has a brilliant design. There was no better way to write it. The chapters are alternating. It starts with current time (Blue John Canyon). The next chapter deals with the past - profiling Aron's life and what led to the current. The next chapter is back in Blue John Canyon. And so it goes, alternating back and forth. We get to know Aron from these alternating chapters about his past. Without them, the book would be hollow. They build the background for understanding Aron. They tell the story of how he got in such topnotch physical condition, which was paramount to surviving the ordeal. His years of climbing and love of adventure explain why he was in Utah. As the book progresses, the time-periods get closer together, until finally they catch-up when Aron arrives on Friday night in the Canyonlands parking lot. Similarly, with Aron being trapped in Blue John Canyon, this allowed his past to catch-up with the present - - just like what happened with the book. He used the time to "internally monologue" about his life and philosophies. He thought about what brought him to the point of being trapped in the canyon. He realized the importance of family and friends. In summary, one of the themes in this book is "past meets the present." And it is something many of us can identify with. We need to understand who we are, by reconnecting with who we were. For Aron, the past and present combined to give him the strength, smarts, and stamina to survive an ordeal of epic proportions. The reader is given a chance to be at-hand with Aron in Blue John Canyon. His lucid and lyrical prose is outstanding. You will be in tears as Aron writes about the deliverance from his tomb. This book will inspire you. Aron's desire to live will motivate you to also live your life to the fullest. All of this from one book! Amazing!

Published by Thriftbooks.com User , 16 years ago
I thought this would be the obligatory "had a media-hyped, gripping (so-to-speak) experience, might as well write a book" kind of thing. I was pleasantly surprised by the coherence and quality of this book. Along with his slot canyon epic, Aron weaves together stories from his life that illustrate his choice of and joy in a high-risk outdoor lifestyle. A thoughtful book that outdoor adventurers and armchair enthusiasts can enjoy and learn from.

Published by Thriftbooks.com User , 17 years ago
Quite an interesting book here. There is actually something for everyone in it's pages. For those who want inspirational writing, here it is. An adventure story? Again, this one has it. Travel log, story of human indurance, tragedy, suspense..again, it's got it all. Even if you want to do some great author/person bashing, this is great. All that being said, I did enjoy this book. This is a great first time work. I noted in other reviews that several people took a swipe at Mr. Ralston's seemingly lack of common sense when it came to putting himself in danger. Give this guy a break. Yes, he did some really silly things. Think about it...when you compare his actions to say a 45 year old guy, with a strong history of heart disease, who continue to smoke three packs of smokes per day, sets infront of his TV every night and all weekend, gulping beer after beer and only exercises when he reaches for the remote...is this second guy showing any better judgement than Mr. Ralston...I don't think so. Is suspect the second guy is actually even in more danger. The author has lived his life the way he wanted. That was his right to do so. I had to admire this candid admission to the stupidity of some of the things he did. That took some real soul searching and guts. There are very, very few individuals who have lead any sort of life at all that have not taken similiar risks to one degree or another. As to the writing aspect. I enjoyed the author's style. I did find his constant usage of "trade jargon" rather difficult to navigate even though Mr Ralston was kind enough to provide a pretty good glossary. I did like the stories of his other adventures and feel they were a necessary addition in order to understand just how he got were he got. I do hope we can look for more work along those lines from this young man. After seeing the route so many young people are taking today, so very many mistakes being made, I feel encouraged by this fellow's story. Thank you Mr. Ralston!

Published by Thriftbooks.com User , 17 years ago
I agree with the last reviewer. The fact that Aron Ralston used poor judgment, i.e. hiking alone and not telling anyone where he was, only makes his story more compelling. Hasn't everyone made a huge mistake that leads to a painful, regretful plight? Calling the media sensationalistic,in this instance, is just plain silly--amputing one's arm in order to save one's life IS a sensational, highly unusual event. I don't think the media or Aron is making it anything more than what it was. The charge that Aron is self-promoting is just as ridiculous. After you read the book, you will see that Ralston is a humble person with great integrity and strength. He is simply telling his own, true, unbelievable story. Bottomline, this book is incredibly well-written, moving and not to be missed.

Published by Thriftbooks.com User , 17 years ago
Aron's story is intelligent, sincere, warm and at many times, funny. As amazing as the story of his ordeal is, what is nearly as amazing is that something this well-written was created by the person it involved, not a ghost writer. It is nothing short of fine literature, not to mention an obviously compelling story. Aron inspires us all. He shows us that a motivated person can save himself, and that the force of life can beat unbelievable odds against the force of death.
Copyright © 2020 Thriftbooks.com Terms of Use | Privacy Policy | Do Not Sell My Personal Information | Accessibility Statement
ThriftBooks® and the ThriftBooks® logo are registered trademarks of Thrift Books Global, LLC