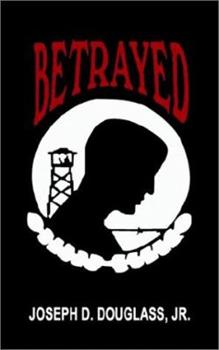 Over 30,000 American POW/MIAs were left behind following WWII, Korea, Vietnam, and the Cold War. American officials abandoned the men rather than confront the Communists who held them captive. This was done as a matter of policy. As one White House staff officer testified, "We couldn't put pressure on the Soviet Union -- they had our prisoners and we couldn't put pressure on them-- Our policy forbid us from doing it." Many of the men, the lucky ones,...

Guide for Understanding The P.O.W./M.I.A. Issue

Published by Thriftbooks.com User , 18 years ago
This book by Dr. Douglass brings the light of truth to the abandonment of American Military Service Personnel by our government officials for political expediency. Working in this issue as an advocate, and having the priviledge to have been mentored by knowledgable people. I could not understand why things never added up. I and my mentors discussed the probablity of the things Dr. Douglass writes about. We actually believed we were simply speculating now that we see the proof in writing with the documentation to back up what is written. We now know why when any one gets close to gaining access to who really is behind the abandonment, pressure is brought to bear on them to stop looking. This book brings me to a conclusion that the lifelong state department employees care more about themselves than the welfare of the country or those who defend it.

Of time lines and regime permeabilities

Published by Thriftbooks.com User , 19 years ago
I was visiting Prague a few days before the Soviet tanks rolled in...as for "timelines," the regime in Czechoslovakia was "humanfaced" a mile wide, but an inch under the surface, plenty of military and other bastions of international (hardline Soviet) communism were extant. It could scarcely be otherwise: the Kremlin Politburo was not happy with the modicum of downplaying of repressive totalitarian goverance that the reformist element was able to gain over and against the iron power of the former, Soviet-controlled regime. It was as embarassing to the Soviet dicatators as the 1956 Hungarian popular uprising and the necessity for the 1960s Berlin Wall. Even so, the main institutional elements of the repressive Soviet system were left largely unconfronted by a reformist government gingerly treading close by the "bear." Thus Dr. Douglass' "timeline" is indeed most accurate. Czechoslovakia's borders remained as permeable as ever to any business activities the hardliners deemed necessary--as expected from a member of the Warsaw pact. As for the book itself, it is true history, thoroughly researched, and a reminder that the false and illogical "religion" of communism became a refuge for an international criminal class of thugs (please see also Douglass' "Red Cocaine," A. Golitsyn's "New Lies for Old," Stephane Courtois' "The Black Book of Communism," Rev. Richard Wurmbrand's "Marx and Satan," and Rev. Clarence Kelly's "Conspiracy against God and Man"), whose behavior put most of the worst of the capitalists' in a more favorable light.

Published by Thriftbooks.com User , 19 years ago
Dr. Dougrass' "BETRAYED" gave me nightmares for a week. I am a Spec Ops Vietnam vet who initiated a technology program for Spec Ops at DARPA in the `80s. I was especially concerned with Soviet chemical weapons that were tested in Afghan villages. Douglass' information about enemy chemical weapons is right on the money. The late Patrick Mahoney, a friend and staff member to the late Congressman Larry McDonald (shot down by Soviets going to S. Korea flight KAL 007) fought the POW/MIA issue for years and kept me informed. U.S. Congressmen and staff members with top secret clearances could not penetrate the government cover-up. Despite photographs, eye witness accounts and other hard information they were unsuccessful in breaking the code of silence. Again Dr. Douglass is accurate in his information and presents the most complete study I have seen on the subject. Betrayed is not a pleasant read, but it is a must read. America must demand a complete change in its treatment of POWs, MIAs and their families. BETRAYED can start the process.

A must read for every true American

Published by Thriftbooks.com User , 19 years ago
Dr Douglass has "rolled the stone away" with this in-depth expose' on the MIA/POW issue/reality. He has researched the subject down to the nth degree and has brought facts to the surface, complete with dates, times, and those present that has never before been reported in such factual detail. You shall know the truth and the truth shall set you free. I certainly hope and pray that folks such as President George W. Bush, Secretary Colin Powell,Secretary Rumsfelt, members of the U. S. Congress, and all elected and appointed officials will take the time to read BETRAYED. No fiction here. Just cold hard facts that cry for attention and action on the behalf of our government. Dr Douglass has done America a great service by writing this work of truth saying.

Published by Thriftbooks.com User , 19 years ago
Joe Duglass wrote a book containing information about invovement of the Soviets with our POWs in World War II, Korea and Vietnam. I am a veteran of Korea and Vietnam Wars. As a deep covert operator in Special Operations I had heard and knew that most of this was going on. But we didn't have a defenitive source with creditable information. Douglass found such a source in Czech General Jan Sejna. The US government knew that it was the Czechs who were in charge of setting up hospitals in Korea and Vietnam, and many other matters dealing with US POWs. The US government has known for years that some of our POWs have been sent to Moscow, never to be seen again. I learned of the in Korea. The US government knew that many Czechs were with Moscow when the Soviets went into Czech opposition tried to overthrow the communist regimen in that country. Douglass wrote a powerful book on deciption and deceit by some of our own government agencies and the communist. For those who still support the failed communist powers, get a life.
Trustpilot
Copyright © 2022 Thriftbooks.com Terms of Use | Privacy Policy | Do Not Sell My Personal Information | Accessibility Statement
ThriftBooks® and the ThriftBooks® logo are registered trademarks of Thrift Books Global, LLC