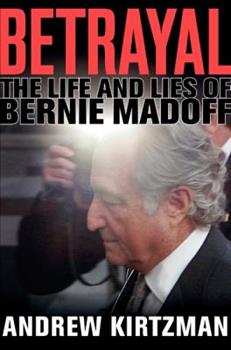 Betrayal: The Life and Lies of Bernie Madoff

"Accurate and highly readable." Wall Street Journal Emmy award-winning journalist Andrew Kirtzman, explores "The Life and Lies of Bernie Madoff" in Betrayalan in-depth, personal look at the architect of the biggest financial fraud in history. The New York Times calls Betrayal, "a novelistic, you-are-there sort of narrative," and the shocking story of the King of the Swindlersand his hundreds of celebrity and corporation victims, and the everyday people...

Betrayal is the Best

Published by Thriftbooks.com User , 13 years ago
Absolutely fascinating read! Reads like a novel, so that makes it very easy to read. We meet the people he betrayed, and then when we learn of his incredible betrayal, we feel their sorrow, anguish and pain. I cannot believe someone could be so greedy as to destroy his best friends' and his families' lives. I find it almost impossible to believe that the SEC did nothing in all those years that Markopolos was trying to expose this immoral crook. Heads should roll! This book shows that power is hard to destroy. Underlings get caught up in the idea of a person's power and cannot believe someone of Madoff's stature could be so corrupt. Red flags were everywhere, as Kirtzman so clearly points out. I have not read the other books, but chose this one because it was highly reviewed on NPR. Glad this is the one I chose. Very very well written and very well documented. I highly recommend this if you are looking for the basic story.

This is the Madoff book to buy

Published by Thriftbooks.com User , 13 years ago
I found reviews in TIME magazine (Summer 2009) of the top 3 books to buy about the Bernie Madoff scandal. As suggested in the article, this particular book is probably the very first one you should buy (my words). It is literally spellbinding, a real page-turner. I'm on my 3rd reading of it because each time, you'll pick up more details about how the entire scandal began and progressed over time. And in particular, the efforts of the ultimate "whistleblower", now finally making current news in Aug-Sept 2009. If you are Jewish, and I'm not, it will give insight into the mindset of how "money" becomes status...in this particular case, that is. Great writing, and the author always leads you back to remind you of the particular names involved, lest you forget how the scheme started, and why, and then mushroomed into unthinkable evil. A fascinating book, quick to read, and very well-written. Truly an "A to Z" of the whole affair, from Bernie in elementary school to the day he was sentenced to prison. All of the "juicy details" of the story are expertly noted and legally referenced in the appendix.

Biggest payoff of the Madoff books

Published by Thriftbooks.com User , 13 years ago
The reviews from Time Magazine and Reuters were right, Kirtzman's book on Madoff was more engaging than the others out there. The book by reporter Erin Arvedlund, snoozeville. It's not about Madoff at all - it's about his enablers. Betrayal was chilling and a great read! Kirtzman tracks how Madoff descended into evil as early as the 60's... unbelievable.

BEST BOOK ON BERNIE SO FAR

Published by Thriftbooks.com User , 13 years ago
I am totally fascinated by the Madoff case; it's a Wall Street melt-down and a Shakespearean tragedy at the same time. I've now read the two prestige books on the case - "Too Good to Be True" by Erin Arvedlund and "Betrayal: The Life and Lies of Bernie Madoff" by Andrew Kirtzman. From a reader's standpoint, the books couldn't be more different. Arvedlund's prose is impossibly dry, and she doesn't have the skills or experience to know how to create a narrative. Instead, the facts in her book are laid down like a college term paper, and it's left to the reader to come up with the drive and curiosity to keep going. There are certainly some good points and interesting facts in her book that make it worth plodding through - you get a load of details about Madoff's Wall Street career - but it's a slow, often boring read. Kirtzman is an experienced author, and clearly grasped the epic nature of this story. Even though we all know how it ends, his book keeps you hooked with its stories about Madoff, his family and the people who trusted them. As he develops his characters and tells the stories of their experiences with Madoff and their growing trust in him, you can feel the disaster looming, even as you keep hoping these people can somehow avoid their inevitable fate. When the catastrophe hits, it's a tidal wave that drowns everyone. It's an incredible story, told by a skilled writer. Kirtzman interviewed over 100 people for this book and has great behind-the-scenes stories about the mounting crisis inside the Lipstick Building as the insanity mounts, and the panic inside the feeder funds as their investors start asking questions the executives are hopelessly unable to answer. While Arvedlund's book is admirable, Kirtzman's book is filled with far more gripping details and makes for a great read.

Inside the Cult of Greed and Entitlement and Don't Ask,Don't Tell

Published by Thriftbooks.com User , 13 years ago
An astoundingly well researched and deftly crafted look,not only at Madoff himself,but also inside the pool of victims ,both witless and not,in which the shark found his prey.Unlike some of the others I have read ,this is no mere compilation of news stories but incisive and succinct cameos of both victims and accomplices, implicit and explicit, and the greed and entitlement driving the delusion.While many of the victims were ,indeed,innocent dupes,the larger question of how sophisticated and experienced investors with investments in the millions if not billions could have been deceived is answered,albeit somewhat tangentially.Does anyone with knowledge of Wall Street really believe that mega investors with mega advisors in the investment banking,legal and accounting communities could really believe that anyone or system could beat the market all the time? Of course not,and one needs no knowledge of sophisticated financial models to so conclude. So how did they convince themselves? Kirtzman uses the phrase "forward trading", A.K.A. insider trading,i.e. Knowing full well no model ,however intricate or abtruse, could replicate the chaos of markets ,the only other explanation being that Bernie knows something or someone we don't.Wink wink!! But,let's keep that to ourselves,"Don't ask ,don't tell" and let the good times roll; after all, we are entitled and part of the in pool.. A great,compelling read,well written and on a par with the best of biz books such as "Barbarians at the Gates" etc
Trustpilot
Copyright © 2022 Thriftbooks.com Terms of Use | Privacy Policy | Do Not Sell or Share My Personal Information | Accessibility Statement
ThriftBooks® and the ThriftBooks® logo are registered trademarks of Thrift Books Global, LLC