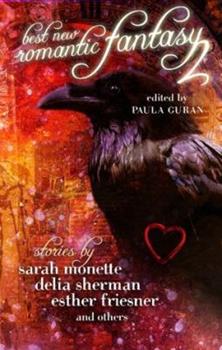 Published by Thriftbooks.com User , 14 years ago
This anthology consists of fifteen well written romantic fantasies published in various sources in 2006. The tales are fun to read as one's soulmate might be a soul stealer as opposites attract and love does not guarantee a fairy tale happy ever after though it does make the Guren world go round; more often elliptical rather than circular. There are no clinkers as each of the chosen stories is a solid entry though the short format does not lend itself to fully developed paranormal elements. Those excellent few that do typically contain a vivid location make the fantasy seem genuine; especially gripping are the haunting coastal "Journey into the Kingdom" by M. Rickert and the forest of "Evergreen" by Angela Boord. Sub-genre readers will appreciate this fine anthology whether the stars are witches, elves, fairies and various assortments of ilk from other realms as a virtual who's who (O'Keefe, Friesner, Monette, etc.) contribute. As an aside the first volume is actually titled the BEST NEW PARANORMAL ROMANCE. Harriet Klausner

Published by Thriftbooks.com User , 14 years ago
The highlights of this book for me were Haddayr Copley-Woods' 'The Desires of Houses' and Delia Sherman's 'La Fee Verte.' 'The Desires of Houses' is a short piece about one of my favourite subjects, the personalities of inanimate objects, and 'La Fee Verte' is about a 19th century French prostitute who has visions of the future (and past). The contents list for this anthology is: 'An Autumn Butterfly' by Esther Friesner 'A Light in Troy' by Sarah Monette 'The Moment of Joy Before' by Claudia O'Keefe 'Jane. A Story of Manners, Magic, and Romance' by Sarah Prineas 'Journey into the Kingdom' by M. Rickert 'Wizard of the Eternal Watch' by Eugie Foster 'Moon Viewing at Shijo Bridge' by Richard Parks 'The Depth Oracle' by Sonya Taaffe 'Smoke & Mirrors' by Amanda Downum 'The Desires of Houses' by Haddayr Copley-Woods 'Evergreen' by Angela Boord 'The Red Envelope' by David Sakmyster 'The Mountains of Key West' by Sandra McDonald 'The Story of Love' by Vera Nazarian 'Le Fee Verte' by Delia Sherman The Sarah Monette story was elegantly written, as always. It's about the last survivor of a conquered fortress, who has been put to work as a library slave. The Vera Nazarian story was good, but I'd already read it in Salt of the Air, a really good all-Nazarian collection. 'The Red Envelope' is a neat story about a man married to a Taiwanese ghost. Sarah Prineas' 'Jane' is a lot of fun, about a Regency-like society where a young woman is being harassed by wizards. 'The Depth Oracle' is well-written but a little too dense for me.
Copyright © 2022 Thriftbooks.com Terms of Use | Privacy Policy | Do Not Sell My Personal Information | Accessibility Statement
ThriftBooks® and the ThriftBooks® logo are registered trademarks of Thrift Books Global, LLC