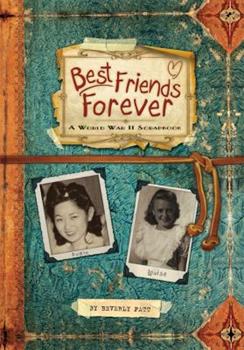 German-American Louise Kessler, 14, starts a scrapbook when her best friend, Dottie Masuoka, leaves for the Japanese internment camps. Louise's scrapbook includes items from her life "on the home front" as well as Dottie's letters and drawings from the internment camp. Together, their intertwined stories tell of a friendship that even war cannot tear apart.

Visually beautiful, and tells the story well too

Published by Thriftbooks.com User , 11 years ago
This book is a scrapbook-style story of a year in the life of Dottie and Louise, 14-year olds friends in Seattle in 1942. Dottie Masuoka's family was relocated to Camp Harmony; Louise is dealing with being called "Jap Lover" (and other things) at school. Visually gorgeous, with a well written story line as well. The book really looks like a scrapbook, with what appear to be yellowed newspaper articles, ticket stubs, hand written letters, puppy paw prints, and other ephemera taped inside. This would be a great book for a reader who already loves historical fiction, or something to visually entice a reluctant reader to jump into Dottie and Louise's world. The notes and bibliography at the end make this a great choice for classroom use as well. Fabulous work, Beverly Patt and Shula Klinger and Kristen Branch.

Published by Thriftbooks.com User , 12 years ago
Tweens are likely to identify strongly with the sensitively-drawn characters in Beverly Patt's new scrapbook/novel that tells the story of a close friendship between 14-year old Louise and her best friend Dottie Masuoka during World War II. Louise starts the scrapbook when the Masuoka family and all other Japanese families are "relocated" to internment camps at the beginning of the war; it's her way of keeping a record of everything that happens to share with Dottie upon her return, from the goings-on at school to the growth of Dottie's puppy, Roxy, who she was forced to leave with Louise and her family because pets were not allowed at the internment camps. With yellowed pages and old newspaper clippings, photos, and miscellaneous period items such as hair ribbons and margarine box labels attached with yellowed tape, the book looks like it could indeed be a old scrapbook, which adds to the realism of the story. Louise includes Dottie's illustrated letters to her describing life in the camp, from the boredom, the constant dust, to her worries about her grandfather's declining health. Dottie wonders poignantly in one of her letters to Louise, "Why was I born with this Japanese face? No one can see my American heart." Louise has her own troubles at home; because of their German last name, neighbors throw rocks through their front window, together with a note "Go back to Germany, Nazis." She can't help wondering why, since America is at war with Germany and Italy too, they aren't locked up in camps like the Japanese? How can America be "the land of the free and the home of the brave," Louise wonders, when her friend Dottie and her family are forced to live behind barbed wire. Not to mention the small dramas of teenage life that Louise must cope with, including how to knit socks for soldiers without holes, squabbles with friends, growing a Victory Garden, her worries when her own brother joins the Navy, and even a flirtation with a wounded sailor. This was a very well-done and well-researched book that would be enjoyed by girls who read the American Girl series of historical fiction, and are ready to read something aimed at a bit older audience.

Published by Thriftbooks.com User , 12 years ago
Great read. I cared so much about Louise and Dottie. There was a perfect mix of information and wondering that clearly depicted the plight of this friendship. The tone and actions and dialog was very true to the time period. While I wanted more, it was a perfect ending, leaving the reader with unanswered questions, just the way it was for everyone during WWII. And illustrations were amazing!

Published by Thriftbooks.com User , 12 years ago
My young son loved this book, and was eager to review it (his words below): I give this book five stars, only because I cannot give it infinity! With only the words, "this is me, Louise Margaret Krueger, age 14," Beverly Patt begins a marvelous story of a relationship between two friends who are determined to keep their friendship going, in spite of the fact that they are on opposite sides of the war. I feel it has very important concepts for learning to solve a mystery yourself. For example, when I read it, I was able to analyze one of the letters, and find a strange connection. I loved the way that the author made the pictures look like they were taped into the book, which made it very realistic. I also love the way the pictures are from the time period, and that it's typed as thought it's handwritten. It makes me feel like I'm reading a personal scrapbook from 1941. It doesn't really talk about politics, or the actual history of WWII, but it does show the racism that many all-white people had toward anyone who showed anything to do with the opposing side (The Axis). I like that they talk in the way people would have been thinking at the time, and it is historically correct. It is a great book, and I would recommend it for any girl from the ages of 8 to 20.

Great for tweens, excellent school resource, did not want it to end!

Published by Thriftbooks.com User , 12 years ago
When I finished this book, I did not want it to end. I will most certainly share this book with my own daughter. I have no doubt she will be drawn to the story of friendship told by these wonderfully delightful (and funny) characters. I also know she will spend hours pouring over the fabulous illustrations and hoping, like me, that the story of Louise and Dottie continues well after the book is done. A fabulous book - perfect for schools and the family book collection. Every parent of a tween should own a copy. This is not your typical WWII book for kids. This is a visual feast for the eyes, and a wonderful story with a timeless feel -- a classic!
Trustpilot
Copyright © 2022 Thriftbooks.com Terms of Use | Privacy Policy | Do Not Sell or Share My Personal Information | Accessibility Statement
ThriftBooks® and the ThriftBooks® logo are registered trademarks of Thrift Books Global, LLC