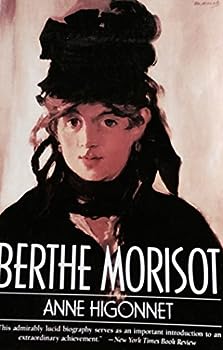 Berthe Morisot (1841-1895) produced nearly 900 paintings and was the only woman among the original six Impressionists whose first group exhibition scandalized most of Paris. Higonnet draws on the artist's unpublished diaries and letters to create not only a portrait of a remarkable woman but also vivid portrayls of feminine culture in the late 19th century.

Published by Thriftbooks.com User , 21 years ago
GREAT BOOK!! I bought this book used from That Book Lady,I recieved the book promptly and it was in excellent condition.The book has wonderful information on Berthe Morisot.

Published by Thriftbooks.com User , 21 years ago
My first reaction to Anne Higonnet's biography of Berthe Morisot was that it was a bit stiff. I had recently read Dominique Bona's "Berthe Morisot: Le secret de la femme en noir" and found that book to be well done, even though lacking documentation and even though indulging in "maybe it was like this" speculations from time to time. But I very much liked Dominique Bona's informal style, referring to Berthe Morisot as "Berthe", while Anne Higonnet almost always refers to her as "Morisot" (a small issue but one that is quite representative of the stylistic difference in the two biographies).Of course, Anne Higonnet's work is more than 10 years older than Dominique Bona's, so that Dominique Bona reaped the benefits of reading Anne Higonnet's book. And there are many benefits to be had. Anne Higonnet has done a superb job of researching direct and indirect and even background sources to fill in the picture of Berthe Morisot's life and setting.Sometimes Anne Higonnet's presentation creates a distance: emotional connection is lost amid the cultural history. But overall, this is a fascinating "MUST" book for anyone who wants to understand Berthe Morisot's painting, persona, and life.
Trustpilot
Copyright © 2022 Thriftbooks.com Terms of Use | Privacy Policy | Do Not Sell My Personal Information | Cookie Preferences | Accessibility Statement
ThriftBooks® and the ThriftBooks® logo are registered trademarks of Thrift Books Global, LLC