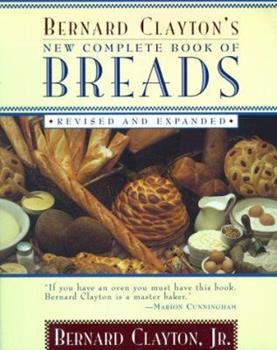 Clayton has revised 200 of his classic recipes for the modern cook and added 100 new recipes to offer an incredible range of home-baked treats. A classic and comprehensive guide for novice and experienced bakers alike. Line drawings.

So many kinds of bread recipes to choose from!

Published by Love to bake , 1 year ago
Many traditional and new bread recipes from different places in the world. My husband’s favorite is the onion lover’s braid and anise kuchen is like a holiday wrapped gift. I’ve had this book since the 70’s and have never been disappointed!

Published by Thriftbooks.com User , 15 years ago
At first glance, one might think this book is a bit excessive. I mean, it's enormous and it's all bread. And coming from someone who hadn't made a ton of bread before, it was a little intimidating. But the reveiws don't lie - this is an excellent book that will seriously turn ANYONE into a bread making master. The book is divided up into sections - White Breads, Little Breads, Festive Breads, et cetera. And while it may seem like, with so many recipes, a lot of these breads are going to be very specific and not everyday useful, that's very much not the case. The recipes are presented in the clearest, most concise, straighfoward and thorough method of ANY cookbook I've ever owned. Each recipe is broken down, step by step (and even in minutes) for hand, mixer or processor. There are hints and ideas at the beginning of each recipe and along the way. Even someone who has never made bread before would be baking a delicious loaf in no time. I have made at least one recipe a week from this book since I purchased it a year ago and - no kidding - I've only had two that didn't turn out perfect (and in those cases, I knew what I had done wrong). And to be fair, even the ones I messed up were still very edible! Some of my favorites are the Buttery Rowies, all the muffin recipes, and the Pepper Cheese Loaf. I recommend this book to anyone who has an interest in learning to make bread, or is already a proficient baker and wants to learn even MORE delicious recipes!

Essential for anyone who wants to bake!

Published by Thriftbooks.com User , 16 years ago
There came a point in my life when so I missed the Saturday afternoon smell of home-made French bread that I began experimenting with baking. Mind you, I was never a great cook -- I was too impatient, and had no confidence in my own abilities -- so tackling a project as intimidating as making my own bread was a huge step for me. My first bread was, well, passable. It smelled good, but was amazingly chewy. So I got a bread machine. I didn't give up my hand-made project, though; it had, by this time, become a matter of pride. Eventually, after much practice, my bread was deemed "almost as good as bread-machine bread!" by my grateful family. Then I stumbled upon this book. Bought it, took it home, made "The First Loaf." And suddenly, my bread was much, much better than anything the bread machine turned out. Mr. Clayton doesn't just present you with a recipe. He instructs you on the very theory of bread-making, from the role of each ingredient and equipment to the process of constructing your own oven if you so desire. I make all of my bread now with a wooden spoon and a large bowl, and I often make it without any recipes at all. Bread is now much more for me than something I make when I get nostalgic -- it is my hobby, and my therapy. And whenever I decide to try a new kind of bread, this book is the first place I turn to. No matter how skilled I become, this book still has something new to offer. My next project is the brioche. Wish me luck!

Lots of Easy Bread Recipes for the Rest of Us.

Published by Thriftbooks.com User , 17 years ago
The subject of bread baking seems to attract large, authoritative titled books, as this is the third 400 or more page book on bread which claims to be either complete or a bible. As the other two books (both entitled `The Bread Bible' by Beth Hensperger and Rose Levy Beranbaum) were published in the last five years and Mr. Clayton's first edition of his book was published thirty years ago, Bernard Clayton has a distinct claim to have commanded this cookbook niche for the longest time, thereby having ample opportunity to correct, improve, and augment. From the author's new introduction, I see he has been doing that faithfully for the last thirty years.In a sense, Mr. Clayton is very old school, as he was in a position to consult not only with Julia Child, but also with Craig Claiborne and James Beard, both of which have left us for tables on high. The augmentation of thirty years' effort gives us a volume which weighs in at 685 pages at an exceedingly reasonable $35. Kudos to Simon and Shuster for giving the volume the price of most cookbooks which rarely exceed 300 pages.While Mr. Clayton arose from an `old school' background, the general technique behind his bread recipes is very modern and will be very welcome to the inexperienced home baker. The heart of his technique for yeast breads is to use the newest incarnation of commercial yeast, typically called `Rapid Rise'. I believe this yeast was specifically developed to work with bread machines. The fact that `Rapid Rise' yeast can be added to dry ingredients without being proofed in warm water and sugar or flour is what distinguishes it from the older `Active Dry' yeast from producers like Red Star and Fleishmans. Virtually every yeast based recipe in the book mixes the yeast with dry ingredients and starts with water at 120 degrees Fahrenheit rather than blooming the yeast in water at about 105 degrees Fahrenheit.The very best thing about Mr. Clayton's book in comparison to it's closest competitor, `The Bread Bible' by Rose Levy Beranbaum is the fact that Mr. Clayton makes a point of showing you how bread baking can not only be easy, but it can be relatively easy with an incredibly wide range of historically and ethnically interesting breads made with manual kneading, bread machine, stand mixer, and food processor. After reading books by such hyper fussy bakers such as Beranbaum, Silverton, and Reinhart, this is a real revelation. The second best thing about this book is revealed in the title. This is a complete book of BREADS. Note the plural. The most important aspect of the book is that it presents, in depth, recipes for twenty-four different types of breads, including many ethnic favorites. I found, for example, a recipe for the Russian Easter bread, Kulich, a close cousin to the local Lehigh Valley favorite, Paska from the Ukraine. None of the other encyclopedic approaches to bread included this recipe. However, I did recently find it and the true Ukrainian recipe in the new book `Celebra

Published by Thriftbooks.com User , 22 years ago
I have baked primarily the mixed grain and whole grain wheat breads from this book with success each time. Good explanations with directions for utilzing stand mixers, food processors or the old fashioned "by hand" methods of mixing and kneading. Packed full of information and recipes. Color pictures would be nice, but it's such a great source for such a variety of breads, I don't hold that lack against it. A must for the home breadbaker from the very father of bread making.
Copyright © 2020 Thriftbooks.com Terms of Use | Privacy Policy | Do Not Sell My Personal Information | Accessibility Statement
ThriftBooks® and the ThriftBooks® logo are registered trademarks of Thrift Books Global, LLC