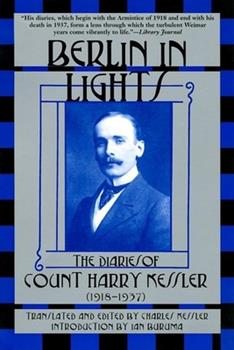 Berlin in Lights, chosen as a New York Times Notable Book, is the collection of German aristocrat Harry Kessler's diaries between the two world wars. Count Harry Kessler (1868-1937), the son of a German banker and an Irish beauty, was a diplomat and publisher who moved easily among the worlds of art, politics, and society. He lived in Berlin but traveled throughout Europe, always with a keen eye to the political climate of the times. His diaries encompass...

Fascinating wide-angle snapshot of Europe between the wars

Published by Thriftbooks.com User , 18 years ago
Alma Mahler Gropius Werfel, in Tom Lehrer's facetious 1964 tribute ballad _Alma,_ is credited with marrying most of the creative men in early 20th-century Europe. (Lehrer was ungenerous, not to Alma but to Europe, since some creative Europeans did live outside Vienna in those days.) In contrast, Harry Kessler's range of contacts, if less intimate, was mind-bogglingly wider. Easton, in his sweeping and eloquent new biography of Kessler (cited below), quotes an estimate that over 40000 names appear in Kessler's complete diary. That surpasses even Dumas's 37267 fictional characters, and Kessler's people were real. Kessler was a learned, aristocratic German diplomat and arts patron with international roots and upbringing, in touch with many leading figures of his day. This book is a portion of his diary, opening in 1918 just before the armistice, and lasting, like Kessler himself, until 1937. Something of a Pepys of inter-war Europe, therefore, though Kessler focuses on ideas, or people of ideas. Kessler observes concisely and often penetratingly the changes in Europe after the Great War, and many historical figures whom he meets either in Germany or during his travels and later exile. The book is thus peopled with politicians and artists from Rosa Luxemburg and Jozef Pilsudski to Diaghilev and Isadora to Erich Maria Remarque who, Kessler reports, knocked out _All Quiet on the Western Front_ in six weeks. Included also are some of that small club of celebrities that surface so reliably in New York book-review periodicals in recent decades (people like Virginia Woolf, the Sackville-Wests, and various Nabokovs; Scott and Zelda however are missing).Which leads me to more on this edition, good and bad. It is a reprint of the 1971 English translation by Charles Kessler (no relation), reissued by its British publisher, with a new introduction by Ian Buruma (also published separately in the _New York Review of Books_). The 1971 translation includes high-quality notes, locating events and personalities in context. The cold-war-era time frame of the notes is evident. This recent reprint however reflects lost opportunities. The introduction describes the milieus (omitting Vienna among culturally important venues -- revenge for Tom Lehrer?) and speculates on Kessler's personality. But it has little of the basic factual background that would help a general reader to make sense of the rest of the book. We must look to the Library of Congress data on the copyright page, for example, to see Kessler's life dates and therefore that he was 50 years old when the book opens. What was Kessler's career before 1918; what was his military service, to which he often alludes in the diary. Most glaringly, Kessler refers internally to the diary as beginning many years before 1918; why does the introduction fail to address the missing parts? It's as if we entered a show at curtain time only to find that we joined the last half in progress, and without explana

Published by Thriftbooks.com User , 21 years ago
Berlin in Lights is a fascinating piece of history. Here we get a first-hand look at the Nazi's gaining power in Germany mixed in with lunches with Erik Satie and Jean Cocteau. So from the high (great culture and artists) to the very low (the rise of Hitler). Count Kessler kept a great journal and had ...interesting friends.
Copyright © 2022 Thriftbooks.com Terms of Use | Privacy Policy | Do Not Sell My Personal Information | Accessibility Statement
ThriftBooks® and the ThriftBooks® logo are registered trademarks of Thrift Books Global, LLC