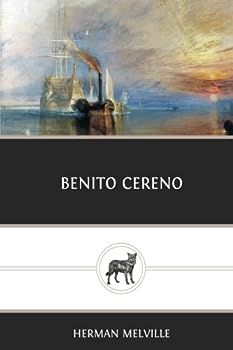 Benito Cereno is a story by Herman Melville that features some of the author's most action packed storytelling presented in this new edition of the great classic.

The Power of Darkness

Published by Thriftbooks.com User , 12 years ago
Joseph Conrad's famous story of the Congo was written decades after Melville's story of a mutiny, and it's extremely unlikely that Conrad was thinking of Benito Cereno when he wrote Heart of Darkness, but the two extended stories have a lot in common: scenes of human depravity, ambiguities about good and evil, nightmarish descriptions, an atmosphere of suspended horror. "Benito Cereno" contains some of Herman Melville's most vivid action writing, though the action is all suspense and premonition until the climax. I'm not at all certain why this story hasn't been acclaimed more widely; it would capture the imagination of a 'young reader' in a tighter grip than Billy Budd. More historically-informed readers will surely guess the mystery of Captain Cereno's behavior on his ghastly ship long before the good-natured American Captain Delano. Readers of Melville's era, recalling the news of the ship Amistad, would have guessed even quicker and more certainly. In fact, the tension between the reader's aroused suspicions and the benevolent opacity of Captain Delano is at the core of the reading experience. The 'Good' seldom have much insight into the "Wicked". But wait, don't rush to judgement about wickedness when you read Herman Melville! Is mutiny a greater wickedness than slavery, and is violence in the act of self-liberation less or more justified than violence in defense of property? And is Captain Delano's good-natured racism, based on his assumption that blacks are docile and unintelligent, not the basis for his nearly disastrous lack of acumen? Babo, the ringleader of the mutiny, may be a horrid beast in Delano's mind but he's surely the smartest Homo sapiens on the scene, a representation that can't have been unintended by Melville. Apparently Melville used the memoirs of a real Captain Amasa Delano as the inspiration for this spine-tingling story of terror on a becalmed sailing ship. The denouement of the tale is told in the form of court depositions, lending a journalistic credibility to the narrative. Some critics have found that structure disjointed and anticlimactic. I didn't, but even if it were so, the larger part of the novella is every bit as spooky as Conrad's masterpiece. "Don Alejandro, he dead!"

Published by Thriftbooks.com User , 12 years ago
It is around 1800. An American sealer on the South Chile coast meets a Spanish slave ship in disarray. Captain Delano from the US ship goes on board the Spaniard and finds things rather disorganized, to say the least. The Spanish captain is not well. His story is about storms and scurvy and fever, which decimated most of the whites and many of the blacks on board and destroyed most of the boats that the ship had. Delano is of best intentions and tries to help, but in the course of time begins to have grave doubts about honesty and capability of the Spaniard, while he is positively impressed by the behaviour of the blacks on the ship. Finally we find out that the Spaniard has been a hostage all along, that the slaves have mutinied and taken the ship, killing most of the whites in the process. The US ship overwhelms the mutinous ship and takes it to Peru, where the mutiny survivors are put to trial. The narration has two parts: the experience of the American captain boarding the mutinous ship without understanding what happens on it, and then the recapitalution 'what really happened' mainly via the court deposition of the title hero Benito Cereno, who is the Spanish captain. I would like to put aside all considerations of the moral question whether a mutiny of slaves on a transport ship is the same as a mutiny of sailors. Obviously not, and I see no need to go into this aspect further. Of course the narration takes us in on the side of the slave owners. Leave it at that, it is history. The fascinating part of the story is the first one, when we follow Delano in his blind attempt at understanding what is happening on the ship in distress. He sees what he sees with the eyes of his personal expectations and prejudices. He is an optimist who likes to see the good side in people. Hence he is happy about the jolly good behaviour of the blacks on the ship. He is disappointed in the less than virile stance of the Spaniard. He never even half suspects the truth. Rather he thinks that the captain may be a pirate in collaboration with the black population on board. This story is a deeply pessimistic one. We can not understand the world. Our benevolent assumptions are likely to be disappointed. The truth is worse than we can expect. Sunshine is an illusion.

The most intense short story ever written

Published by Thriftbooks.com User , 23 years ago
A most powerful story by a most powerful author. The suspense will force you to skip pages, just to see what all the "building up" of emotion and doubt is all about. Highly satisfying. Don't be surprised to find yourself thinking about this story for weeks after you've completed it.
Copyright © 2020 Thriftbooks.com Terms of Use | Privacy Policy | Do Not Sell My Personal Information | Accessibility Statement
ThriftBooks® and the ThriftBooks® logo are registered trademarks of Thrift Books Global, LLC